A couple of months ago, I started playing/developing around the Blockchain, given the Hype it was having lately throughout the crypto space with cryptocurrencies and all the incredible possible applications thanks to the implementation of smart contracts such as NFT collections, NFT games and DAO. I have always been very interested in distributed systems, and the Blockchain is a distributed system in its purest form.

It all started with one of the most popular games, which was applying this new concept of Play2Earn, where the game's assets were Tokens (ERC-721), which the players owned and generated profit while playing with them. They could also trade them with other players through the market that the platform offered, my interest was triggered when I found certain transactions in the market where there were players who bought these assets for a price below the average and then resold them for profit.

After noticing this, I contacted a great colleague and friend since this represented two exciting benefits: first, to learn about this technology that had been talked about for years (still, neither of us had had the opportunity or interest to get into it so far); and second, it presented an actual use case that could also have an economic benefit. What a great incentive!

We started with simple iterations. We created a Bot that listened to the events and transactions of the particular Blockchain that we were interested in. Every time we found a transaction in which we could make a profit, we decided to participate. Obviously, we were not the only ones participating, so we failed most of the transactions, given that others were much faster than us. As the days passed, the more we investigated, the more we learned, and we were making more efficient implementations. We stopped using public nodes and deployed multiple nodes with a modified protocol version.

The Blockchain was an Ethereum fork, so we modified the implementation of the protocol (which is written in Go, and also my favourite language) to run our Bots as part of our internal implementation to be a bit faster. In this way, we end up doing Front-running of the transactions and gaining many more opportunities.

Front running is the act of placing a transaction in a queue with the knowledge of a future transaction.
https://coinmarketcap.com/alexandria/glossary/front-running

In short, all this led me to be more involved in the whole topic of Blockchain development in recent weeks, and that is why I decided to learn a little more in-depth and share it with you while I do it. So the idea is that I'll be posting little articles about technologies involved in everything related to Blockchain, anything that I find interesting and that might be interesting for you too.

To not bore you anymore with this introduction, in this first article, I want to talk about something that is a fundamental part of the blockchain, such as the Merkle tree, and one straightforward implementation in Go. This article assumes you have a basic understanding of cryptographic hash functions and basic binary tree algorithms.

What is a Merkle Tree?

Thanks to this design, this structure achieves the following properties:

When building a Merkle tree, the simple answer is that if we have an odd number of nodes at a particular level, we must duplicate the last node to concatenate with itself. 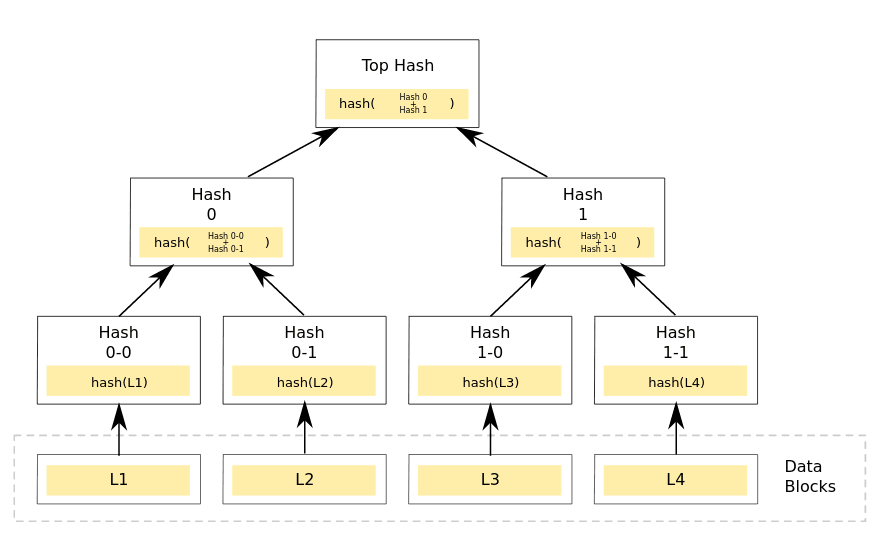 For example, following the diagram above, we can see how users can check the integrity of the L3 block or if it is present in the tree. If they know the root hash and are provided with Hash 1-1 and Hash 0, they can do it by following the next steps: 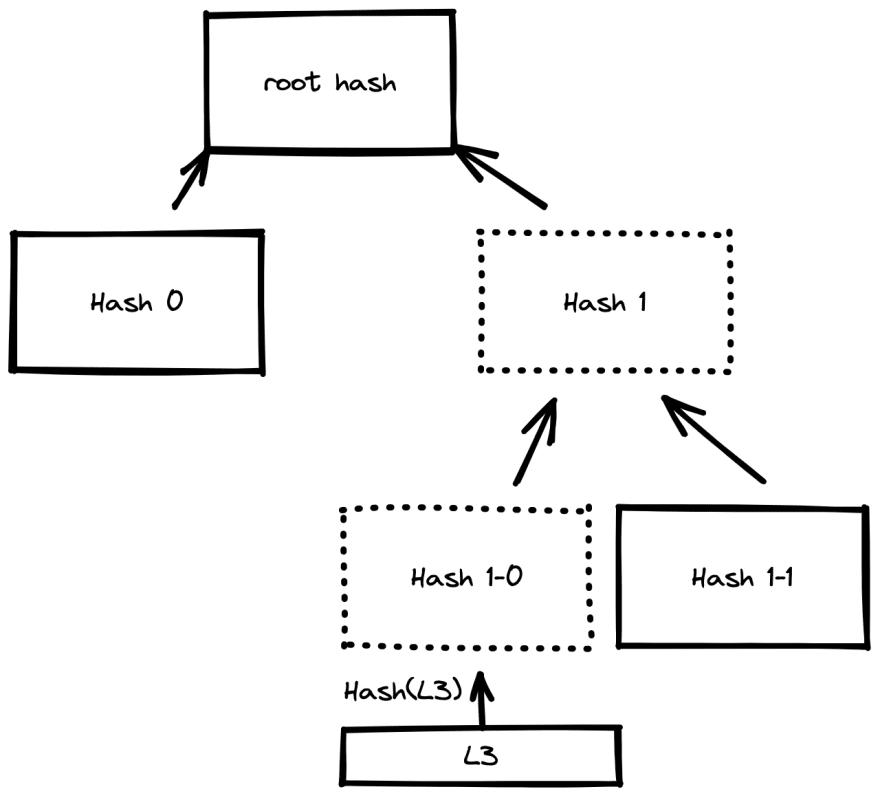 As can be seen, a Merkle tree allows rapid validation and provides a robust security system since if any of the blocks is modified, the result of its hash is different. Therefore, combining its hash with the subsequent hashes will produce a different root hash than the known one.

A Merkle tree is used in many computer applications. In Bitcoin and other cryptocurrencies, Merkle trees are especially used to maintain the state of the blockchain efficiently and securely.

Even if the block contained 1M transactions, it would only need a path with 20 nodes to be able to perform validation.

As you can see, this data structure is compelling and is used in various systems such as:

An easy way to build this tree is to use a pointer-based strategy. With pointers, we can easily see the relationship of nodes to their children and parents and use this knowledge to calculate their hashes correctly. Also, these relations will help us to build the path to prove a piece of data.

As we already know, in this type of tree, the leaf nodes are hashes of the data we want to build the tree, so we must make it from the leaves to the root using a layered construction algorithm from the bottom up.

We will start with two relatively simple structures, in which we will store the tree and the nodes of the tree with their respective values.

The NewFromHashes function will help us create a tree from an array of hashes, as we already know the leaf nodes of this structure are hashes of the desired information.

The next one will iterate through each layer of nodes to form their relationships until it reaches the root node.

The GetProof function receives as a parameter the hash of the data/transaction that we want to verify and will return the hashes of the nodes that are needed to validate its integrity. Using the relation between nodes, we can retrieve those nodes easily.

I added some explanatory comments which I think may clarify the way we get the proof using pointers.

If you go to the repository, you can find the function to verify the proof, and you will also find a complete example of this simple implementation. Github Repo.

I hope you enjoyed the article. Thanks for your time, and any feedback is always welcomed ❤️.

These 5 Crypto Coins Can Give You Tremendous Returns in 2022.

Once suspended, douglasmakey will not be able to comment or publish posts until their suspension is removed.

Once unsuspended, douglasmakey will be able to comment and publish posts again.

Once unpublished, all posts by douglasmakey will become hidden and only accessible to themselves.

If douglasmakey is not suspended, they can still re-publish their posts from their dashboard.