I have a VPS, on which a few of my side-projects are hosted. Recently, I had to set it up a few times, because I made it unusable (please don't ask me how, it was really stupid).

Every time this happened, it took me hours to set it up again. Granted, I don't know much about maintaining a server, and you can probably do it a lot faster than me, but you can never be faster than a script. So, after the second time, I finally decided it is time to automate that process.

I'm hosting ElasticSearch and a few .Net Core applications. They are all accessible via an nginx reverse proxy.

Additionally, there are a few cronjobs.

While writing the script, I decided to add Docker support to all my .Net Core applications, so there is one less thing needing to be installed.

Writing the script was simple, quite a lot simpler than I thought it would be. It was basically copy&pasting the commands from the vendor websites and using the Docker CLI, which is extremely well documented.

I did have some minor difficulties with specific software though, which are described in the following 2 sections.

ElasticSearch has a small fallacy. By default, the vm.max_map_count environment variable is set to 65536.

This is too low for ES, which results in out of memory exceptions. This is very confusing, if there are a few GB of free memory.

The solution is setting vm.max_map_count to at least 262144, as mentioned in the docs, which is quickly found after some googling.

Sadly, crontab does not offer a way to simply add an entry. But as expected, others had the same problem, and Stackoverflow has an easy to use solution for it.

This also demonstrates how applications start after a server reboot. Simply with an @reboot crontab entry.

Automating the setup process has brought down the time until my server is ready from hours to minutes. And in those blissful minutes, I don't have to do anything, just watch the script work.

Additionally, I feel much more comfortable experimenting. If something breaks, I just have to start the script. 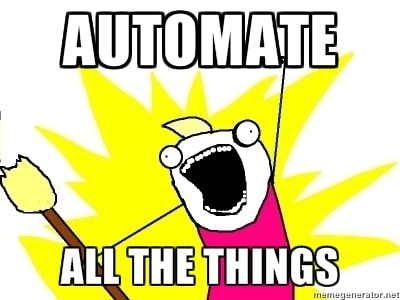 PS: If you are interested in the whole script, you can find it here, minus my credentials of course ;)

Overriding Armbian's "it is based on a dictionary word" during setup

Bash cheat sheet: Top 28 commands for you to learn 🤺