The Summer of 2002 found me homeless in New Brunswick, NJ. There's plenty to be written about all that, but in the interest of focus and brevity, I'll be touching on points only relevant to the immediate topic: the homeless organization HEP/CAT (Homeless Empowerment Project / Community Action Team) I co-founded, and how we inadvertently introduced principles of Agile and Scrum roles into our praxis. Happy to tell those other stories in another venue though!

It was election time and I'd heard of an upstart community group with offices downtown. Some distant associates were managing their campaigns and my intent was to trade my work for whatever I could: a place to sleep, dinner, tobacco, a few drinks at the bar, who knows. I walked out of the office as an office manager, intern supervisor, and investigator. In exchange, I got the freedom to sleep in the office at night. We did some cool stuff, but there was a more important outgrowth. John E. Burns and I teamed up.

John and I hit it off for a number of reasons but a key one was dissatisfaction with the current state of affairs of community organizations in New Brunswick. We started brainstorming key issues and possible solutions. HEP/CAT's first relief was held that night. John and I handed out sweaters in the middle of a summer heatwave.

Sweaters in a Heatwave?

The keys to understanding how that happened actually lay in Agile principles. Central to HEP/CAT's model was the concept that members of the affected community are more knowledgeable about their needs than others and they need to be empowered to meet them. As we grew, we eventually had de-facto "Product Owners" for different communities. These would propose programs providing the highest value to their communities, while the others would discuss how they could support the program as well as any areas of conflict or mutual interest. The requirements for these projects were then passed down into our network who had relative autonomy in how the requirements were met. But for now, it was just John and I. And I was the "Product Owner" for the homeless community.

Soooo, sweaters in a heatwave? 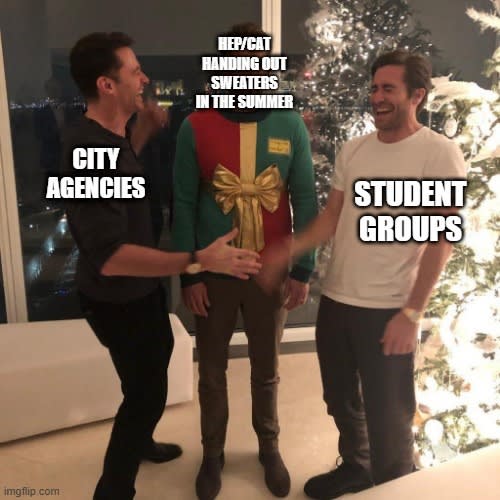 Pretty anti-climactically simple, really. It gets cold at night, even in the summer. As a homeless person in that heatwave, I'd spend the days trying to cool off and the nights trying to stay warm. The sweater idea came from an old fellow that had slept on the bench over from me a few nights earlier. The established groups actually mocked us at first, but it was a clear sign to the homeless community that HEP/CAT understood. With the support of the homeless community, and by empowering them to lead their own programs, within a month we were literally redefining the relationship between the homeless and student communities - not just organizationally, but socially. By getting inside the OODA Loop of the status quo, we were able to drive innovative changes in how people organized with the homeless community - improving value to the homeless community, making more efficient use of resources, while responding quicker to community needs. This can only be achieved consistently by having a "Product Owner" who is in touch with their respective community and also able to effectively transmit that vision to others.

That's the rosy view of one of the parts that went right. In the next installment, I'll address some of the bottlenecks and issues we encountered. Who knows, maybe there's even a way Scrum could have helped us mitigate or remove them?

For more information, check out the Agile Manifesto and the Scrum Guide. The first part of this story can be found here.

Understanding software estimates and how to get better at making them

Dominick Bruno
A life long learner, I enjoy challenging tasks that push the limits of my knowledge and skill sets. I am particularly motivated by projects that promote the commonweal of society.
Where's Dylan Beattie when you need him?
#agile #scrum #filk
My So-Called Agile Life
#agile #scrum