One common challenge for DevOps teams is managing an application’s dependencies and technology stack across various cloud and development environments. As part of their routine tasks, they must keep the application operational and stable — regardless of the underlying platform that it runs on.

Docker enables efficiency and reduces operational overheads so that any developer, in any development environment, can build stable and reliable applications. Docker provides the ability to package and run an application in a loosely isolated environment called a container. Isolation and security allow you to run many containers simultaneously on a given host. You can easily share containers while you work, and be sure that everyone you share with gets the same container that works in the same way.

The Core components of the Docker consists of 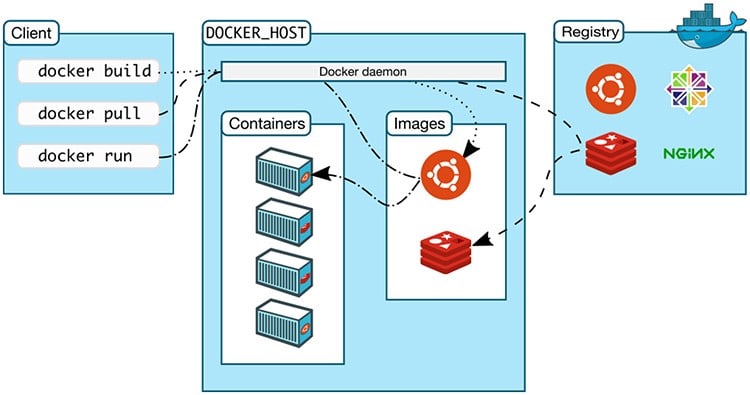 The Docker daemon
The Docker daemon (dockerd) listens for Docker API requests and manages Docker objects such as images, containers, networks, and volumes. A daemon can also communicate with other daemons to manage Docker services.

Docker objects
When you use Docker, you are creating and using images, containers, networks, volumes, plugins, and other objects. This section is a brief overview of some of those objects.

Images
An image is a read-only template with instructions for creating a Docker container. Often, an image is based on another image, with some additional customisation. For example, you may build an image which is based on the ubuntu image, but installs the Apache web server and your application, as well as the configuration details needed to make your application run.

You might create your own images or you might only use those created by others and published in a registry. To build your own image, you create a Dockerfile with a simple syntax for defining the steps needed to create the image and run it. Each instruction in a Dockerfile creates a layer in the image. When you change the Dockerfile and rebuild the image, only those layers which have changed are rebuilt. This is part of what makes images so lightweight, small, and fast, when compared to other virtualisation technologies.

Containers
A container is a runnable instance of an image. You can create, start, stop, move, or delete a container using the Docker API or CLI. You can connect a container to one or more networks, attach storage to it, or even create a new image based on its current state.

A container is defined by its image as well as any configuration options you provide to it when you create or start it. When a container is removed, any changes to its state that are not stored in persistent storage disappear.

The lifecycle of a docker container consists of five states: 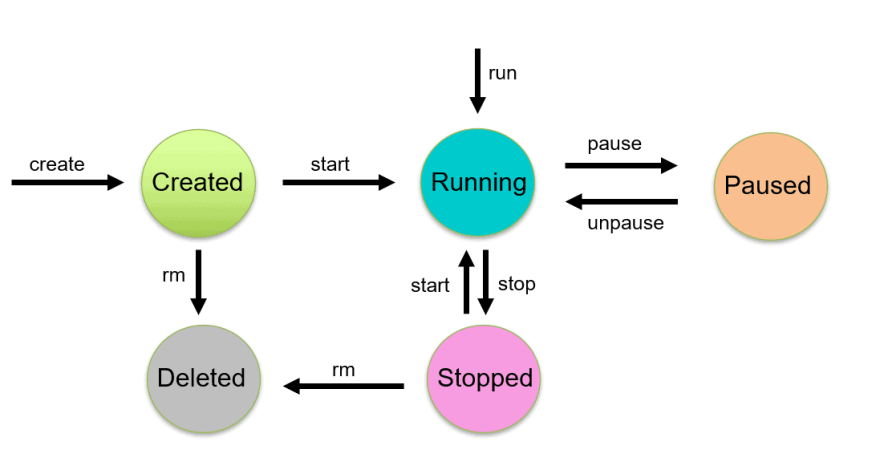 The docker run command creates a container if it is not present. In this case, the creation of the container can be skipped.

Paused state
In the paused state, the current executing command in the docker container is paused. Use the docker pause command to pause a running container.

Unpaused state
In the unpaused state, the paused container resumes executing the commands once it is unpaused.

Use the docker unpause command to resume a paused container.

Then, Docker sends the SIGCONT signal to resume the process.

Complete lifecycle of a Docker container 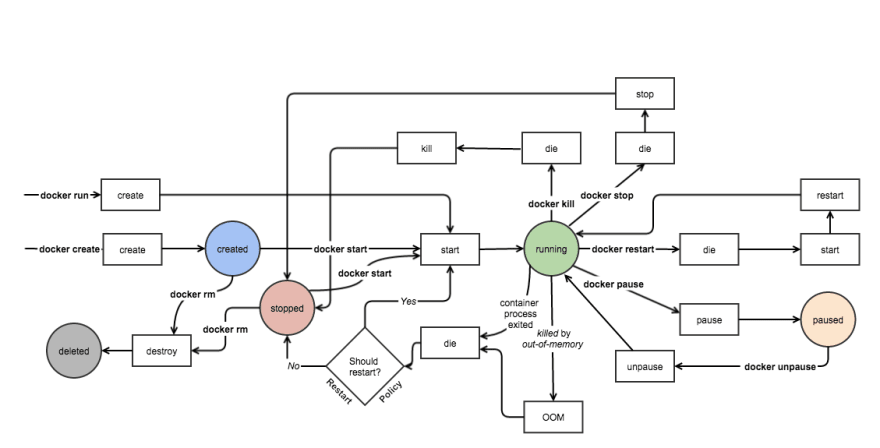 Docker helps developers to develop faster and to release faster. Now we need to move applications to the new world of Microservices and Containers, where meaningful and persistent data exists. How are we going to achieve this with Docker?

By default all files created inside a container are stored on a writable container layer. This means that:

Docker has two options for containers to store files on the host machine, so that the files are persisted even after the container stops: volumes, and bind mounts.

An easy way to visualise the difference among volumes, bind mounts, and tmpfs mounts is to think about where the data lives on the Docker host. 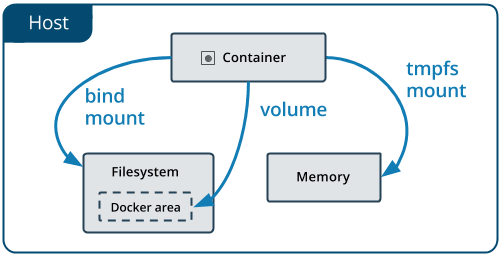 Volumes are stored in a part of the host filesystem which is managed by Docker (/var/lib/docker/volumes/ on Linux).

Bind mounts may be stored anywhere on the host system.
They may even be important system files or directories.

tmpfs mount is not persisted on disk, either on the Docker host or within a container.

Volumes are the preferred mechanism for persisting data generated by and used by Docker containers. While bind mounts are dependent on the directory structure and OS of the host machine, volumes are completely managed by Docker. Volumes have several advantages over bind mounts:

Inviting all Docker community members to support us by improving https://docker.github.io/get-involved page by raising PRs and suggestions.