What is state management?

State management is a complex topic. If you feel that some of your questions haven’t been answered, or that the approach described in this blog is not viable for your use cases, you are probably right 😂.

Why do you need state management?

Think of an app that has two separate screens: a catalog, and a cart (represented by the MyCatalog, and MyCart widgets, respectively). It could be a shopping app, but you can imagine the same structure in a simple social networking app (replace catalog for “wall” and cart for “favorites”). You need to keep track of items that a user added to cart or favorites, the total price in cart and many other things ... So to keep track of all these events you got to manage your state using one of the state management approach.

If you’re coming to Flutter from an imperative framework (such as Android SDK or iOS UIKit), you need to start thinking about app development from a new perspective.

Many assumptions that you might have don’t apply to Flutter. For example, in Flutter it’s okay to rebuild parts of your UI from scratch instead of modifying it. Flutter is fast enough to do that, even on every frame if needed.

Flutter is declarative. This means that Flutter builds its user interface to reflect the current state of your app:

So what are different state management approaches in Flutter ?

Bloc was designed with three core values in mind:

You can use Bloc in flutter via flutter_bloc

Three basic principles on which it is built:

Redux is a unidirectional data flow architecture that helps a developer to develop and maintain an App easily.

How to use Redux in flutter?

Before using Redux, you should know that flutter SDK does not have support for Redux but by using the flutter_redux plugin, it can be implemented.

Provider was created by Remi Rousselet, aims to handle the state as cleanly as possible. In Provider, widgets listen to changes in the state and update as soon as they are notified.

You can use Provider via provider

A Reactive Caching and Data-binding Framework. Riverpod is a popular Flutter state management library that shares many of the advantages of Provider and brings many additional benefits. According to the official documentation: Riverpod is a complete rewrite of the Provider package to make improvements that would be otherwise impossible.

The philosophy behind MobX is simple:

What's my preferred state management and why? 🤔

My preferred state management is bloc🔥 why ? 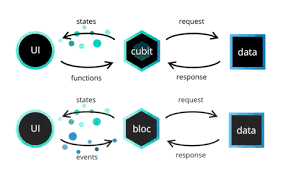 RustDesk is migrated from Sciter to Flutter

Once suspended, dmutoni will not be able to comment or publish posts until their suspension is removed.

Once unsuspended, dmutoni will be able to comment and publish posts again.

Once unpublished, all posts by dmutoni will become hidden and only accessible to themselves.

If dmutoni is not suspended, they can still re-publish their posts from their dashboard.

Once unpublished, this post will become invisible to the public and only accessible to Denyse.

Thanks for keeping DEV Community 👩‍💻👨‍💻 safe. Here is what you can do to flag dmutoni:

Unflagging dmutoni will restore default visibility to their posts.