Today I stumbled upon to a not a very straightforward issue while using IntelliJ IDEA via Python Plugin, and PyCharm. In other words IntelliJ IDEA and PyCharm not recognizing installed packages inside virtual environment.

The Error (via Run button)

The error is clearly says:

BUT (DUDE, THE MODULE IS RIGHT THERE! COME ON!) it was already installed to the virtual environment, and I'm not really sure if I did something wrong, or the program didn't do what I expected. But at that moment I wanted to break the table in half.

Before running the script I've created a env folder for a project to isolate it from globally installed packages.

Then I activate it:

After that, I installed a few packages via pip install. They were installed to env folder as they should, and I confirmed it via pip list command to print out all install packages in the virtualenv.

So why on Earth does the script blows up with an error while using Run button but runs smoothly from the command line both inside IntelliJ IDEA and PyCharm?

The following examples will be from IntelliJ IDEA but almost the same thing happening in the PyCharm.

I was trying to change project interpreter SDK/Setting, create module (inside project structure settings) for absolute no reason just to test if it helps. There's not much I could say about this idea, but this process goes in circle for a few hours in and Googling related things at the same time.

Idea 2. Test in other IDE

After trying the same thing for a few hours I tried to test if the same behavior will be in other IDE's such as PyCharm and VSCode. And the answer is "Yes", same behavior, in terminal runs, via Run button explodes with an error.

At that point I understand that something happening inside IDE since running from a command line everything runs as it should, so I focused on figuring out what causes error inside IDE.

At this point I was trying to formulate a problem in order to google it. The first Google results was exactly what I was looking for PyCharm doesn't recognise installed module.

This is the answer that helped to solve the problem which said:

Pycharm is unable to recognize installed local modules, since python interpreter selected is wrong. It should be the one, where your pip packages are installed i.e. virtual environment.

The person who answer the question had the similar problem I had:

I had installed packages via pip in Windows. In Pycharm, they were neither detected nor any other Python interpreter was being shown (only python 3.6 is installed on my system).

In order to make it work I first found where python.exe inside virtual environment folder is located, and copied the full path.

Path changed from this:

One thing left. We also need to change Python interpreter path inside Run Configuration to the one that was just created inside System Interpreter under Project Structure: 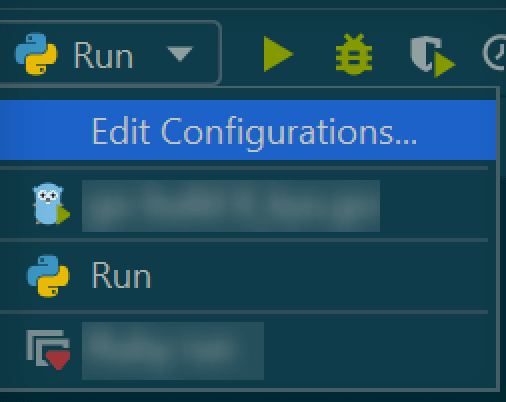 Changing Python interpreter path from the default one: 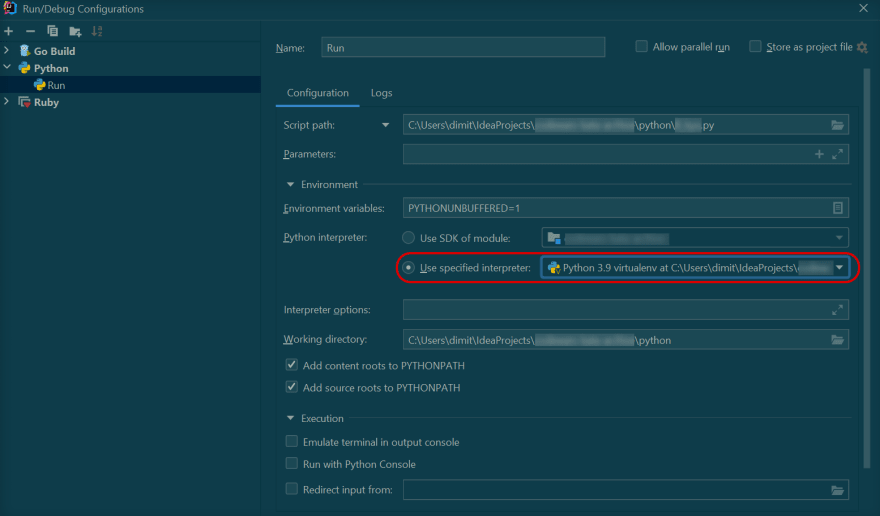 I'm not creating another virtual environment (venv) that PyCharm provides because I already create it from the command line beforehand, that's why I change path inside System Interpreter.

It can be also achieved by creating new Virtual Environment instead of creating it from command line (basically the same process as described above):

Note: When using such method, Bash commands not found for unknown for me reason.

Thoughts on the problem

I thought that IntelliJ IDEA, PyCharm handles such things under the hood so end user doesn't have to think about it, just create an env, activate it via $ source env/Scripts/activate and it works.

I should skip tinkering step right away after few minutes of trying to formulate the problem correctly and googling it instead of torture myself for over an hour.

In the end, I'm happy that I've stumbled upon such problem because with new problems it will be much easier to understand what steps to do based on the previous experience.