In this post I will describe what is a Bloom Filter, its purpose and scenarios where it can be useful to use one. I will also implement a Bloom Filter from scratch in Python, for an easier understanding of its internals.

Goal of a Bloom Filter

A Bloom Filter is a data structure with the goal of checking if an element is NOT in a set in a fast way (for those who know Big O notation, the complexity of inserting and checking if an element belongs to a set using a Bloom Filter is O(1)). It can be very useful to prevent a computation-intensive task to be done often, simply by verifying if the element is definitely not in a set. It is important to understand that the Bloom Filter is a probabilistic data structure: it can tell you that an element is not in the dataset with 100% probability, but it cannot tell you that an element is in the set with 100% probability (false positives are possible). Let's talk about scenarios where a Bloom Filter can be used, and later on you will understand why the Bloom Filter has these characteristics, with a detailed explanation of its internals and an implementation in Python! 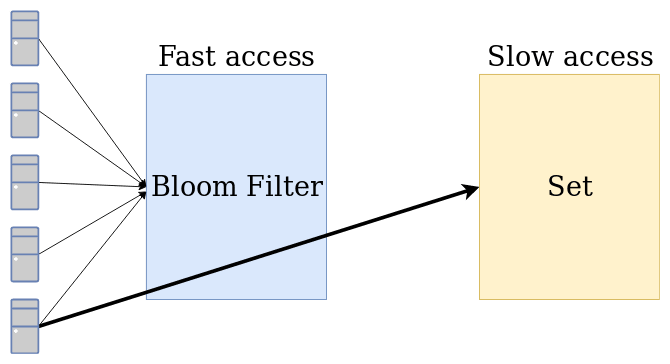 A bloom filter is usually used before a search in a set with slower access. The number of searches in the set can be reduced, so as the overall search time.

Let's think of some scenarios where such data structure can be useful to speed up the computation of some tasks. We can start by thinking in a router of a core network (those that you don't have in your house :) ). It can be required for those routers to have an uplink speed of over 100 Gbit/s. The administrator can add a blacklist of IPs to block their access in the network. That means that everytime that the router receives a packet, at over 100 Gbit/s, it must look at his memory and perform, at best, a logarithmic search (O(log(n))) to check if the IP is blocked, knowing that most IPs are not blocked and that the search will not return any results for most packets. In this case, a Bloom Filter can be placed before the access to memory, to make sure that most packets do not need to wait the time of a search of an IP to be sent to the network.

Another scenario is the database example. When a database has millions of accesses per second, and most of the accesses are searches by a key that is not in the database, it can be important to reduce the impact of the calls on the database, for two reasons: if the number of searches is reduced, the database engine will reply faster to other accesses; if it is possible for a client to not wait for a search on the database and have the result (e.g. not in memory) without needing to access the database, the achieved speedup can be significant.

Finally, to speed up the search for a file in a folder with many files, the Bloom Filter can be used to check if the file is definitely not in the folder.

More typical scenarios of usage of a Bloom Filter can be found here.

What is a bloom filter?

Let's use the first scenario to exemplify the construction of a Bloom Filter. Imagine that you blacklist 100 IP's. The easiest way to mark if an IP was blacklisted or not is to create a list with 100 bits, each bit is one IP. If an IP is blacklisted, we mark the position of the IP as '1', otherwise is '0'.

In this Bloom Filter, the IP number 4 is blacklisted and all other IP's are not.

How many IP's there are?

This implementation works... if only 100 IP's are used. In reality, each IPv4 address has 32 bits, which means that there are 4 294 967 296 (232) possible addresses (some of them are reserved for private networks, broadcast, multicast and other special networks, but it is still a huge number)! And the number of blacklisted IPs will probably not exceed the hundreds, at maximum. We cannot afford to construct a list so large to use only a reduced number of entries. We have to find a mapping between an IP and an entry of a list. And that's where hash functions come in!

But wait... Something is not right. Let's go back to our scenario. Imagine that we blacklist 100 IP's. How does the hash function maps our 100 IP's from a possible 232 IP's to 100 different values without storing any information from them? The truth is that it doesn't. There will be collisions. The hash function guarantees that each IP will have a unique mapping to a number, but since there can be 4 294 967 296 (232) possible IP's, it's impossible to map them all to 100 different values. All the hash function can guarantee is that it scrambles the bits of the input such that the output follows a uniform distribution. This means that if you change the input of the hash function from 192.168.1.1 to 192.168.1.2, the output will probably be totally different, seemingly random (but not truly random, since each input will always map to the same output). 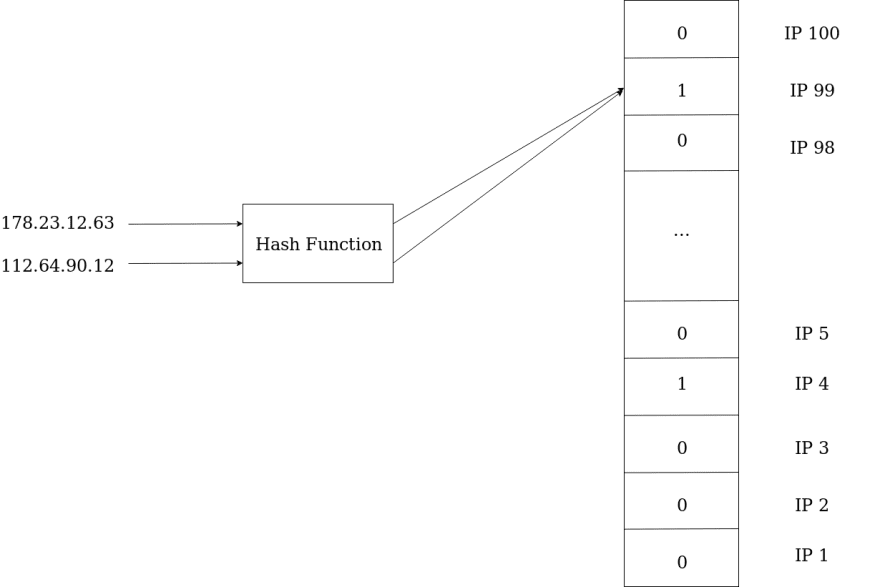 Example of a collision. Two different IP's have the same hash, which means that their index in the Bloom Filter will be the same.

Alright, now from the beginning: we blacklist 100 IP's. Each IP will go through the hash function, and the result of the hash function will return a number smaller or equal to the size of the array. That number will be the index of the array that marks if the IP was blacklisted or not. But there will be collisions, so how do we handle that?

There are two main ways of reducing the probability of a collision, both at a cost. One possibility is to increase the size of the array. If we increase the size of the array (and consequently make the hash function return a number smaller or the same size as the new array size), the possibility of collisions decreases. Specifically, the probability of a false positive (the Bloom Filter return 1 when the element is not in the set) is (1-e(m/n)), where m is the number of elements expected to insert in the filter and n is the size of the filter. 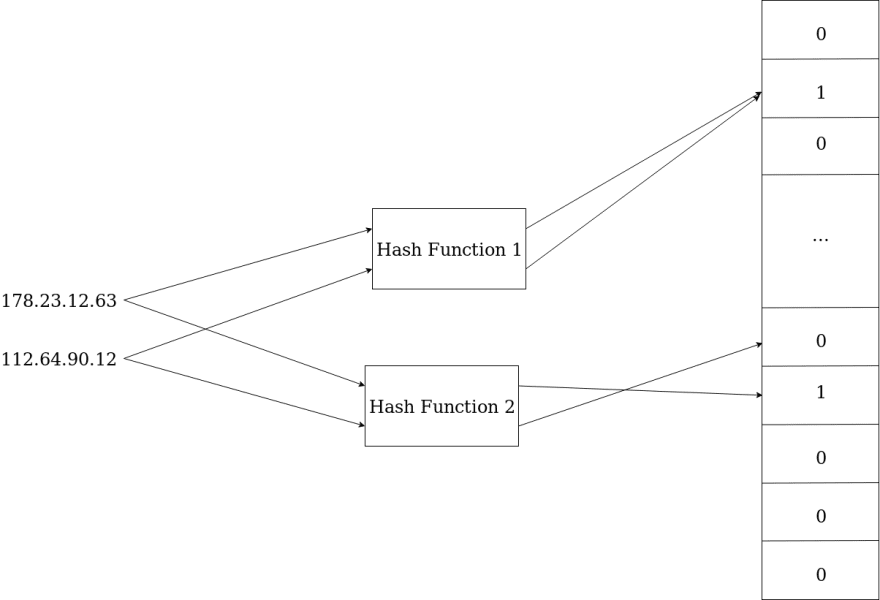 Example of a bloom filter with two hash functions. There is a collision in one of the hashes of the IP's, but it is possible to check that the IP 112.64.90.12 is not in the set, because one of its Bloom Filter positions is not 1.

Let's implement a Bloom Filter in Python in just around 50 lines of code and see the result!

Now let's define a hash function for the Bloom Filter. The implementation used (from here) implements the DJB2 algorithm. Let's use it as a black box, since the explanation of the algorithm is beyond the scope of this post.

Now let's create a function to add an element to the Bloom Filter. For that, let's iterate through all of the hash functions, calculate the hash for the item and finally put a 1 (or True) in the index of the hash.

And that's it! We have implemented our Bloom Filter. Let's try it out!

Let's create a simple test to check if it is working. Let's create a Bloom Filter with 1 million entries, and then set the expected number of elements to 100 000. We are going to add the element "192.168.1.1" to our Bloom Filter as the blocked IP.

Wow! Our Bloom Filter says that, from 100 000 IP's, the only element that could be blocked is really our blocked IP! It did not produce any False Positive!

Here is the full code of our Bloom Filter:

And that's it for Bloom Filters! I hope that you have learned what a Bloom Filter is in detail and how to implement it.

Thanks for sticking by!

VSCode Data Preview 🈸 💎 for devs around the 🌐

What Should I Do When My Data Science Project Gets Canned?