In this tutorial, I will show you the way to install Visual Studio as small as minimum as possible.

When in Visual Studio Installer GUI windows, I suggest you tick like this 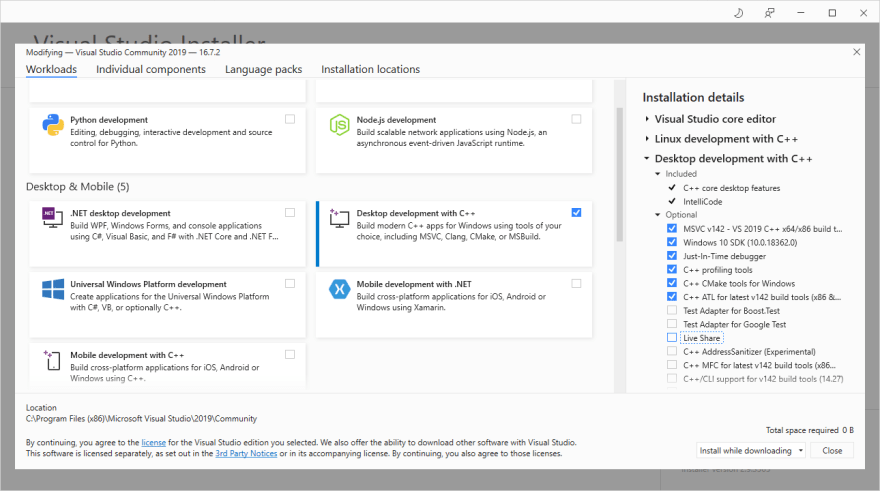 It will consume your diskspace at most 4gb.

vcpkg is a cross-platform C++ libraries manager. It will do the hard work for you such as building, importing, setting up PATHS, ..etc.

How to install vcpkg

To install the libraries for your project, run:

You can also search for the libraries you need with the search subcommand:

In order to use vcpkg with Visual Studio,
run the following command (may require administrator elevation):

All installed libraries are immediately ready to be #include'd and used in your project without additional configuration.

I want to setup glut, glew, glm for my Computer Graphics course.

I go to where my vcpkg is installed. Then I run

I wait until it is done.

A Comprehensive Guide on File Handling in C++

Once suspended, dinhanhx will not be able to comment or publish posts until their suspension is removed.

Once unsuspended, dinhanhx will be able to comment and publish posts again.

Once unpublished, all posts by dinhanhx will become hidden and only accessible to themselves.

If dinhanhx is not suspended, they can still re-publish their posts from their dashboard.

Once unpublished, this post will become invisible to the public and only accessible to Dinh Anh Vu.

Thanks for keeping DEV Community safe. Here is what you can do to flag dinhanhx:

Unflagging dinhanhx will restore default visibility to their posts.