The killing by Minnesota police of George Floyd grabbed the media's attention recently. Nobody can be indifferent to this heinous crime, and the JS community have also reacted to the incident.

The article would be incomplete without a brief description of the event.

George Floyd a black man, died on May 25, 2020, after Derek Chauvin, a white police officer from Minneapolis, knelt on Floyd's neck for 8 minutes and 46 seconds while Floyd was handcuffed face down in the street. Two other officers, Thomas Lane and J Alexander Kueng, further restrained Floyd and the fourth officer, Tou Thao, prevented onlookers from intervening. The incident occurred after Floyd had been arrested on suspicion of passing a counterfeit twenty-dollar bill buying cigarettes at a nearby market. Several witnesses took videos of the incident. The videos that showed Floyd repeatedly saying, "I can't breathe", rapidly spread across social networks and media. All four officers were fired the day after the incident.

We are proud that the JS community leaders have spoken with one voice in this regard and supported the anti-racism movement. Their support is not just bare words. The react.js, express.js, electron.js, and many other communities have asked their users to support organizations and movements which aim to tackle racial inequality. For instance, the Equal Justice Initiative. It is a non-profit organization that is committed to challenging racial and economic injustice and that provides legal representation to prisoners who may have been wrongly convicted of crimes, poor prisoners without effective representation, and others who may have been denied a fair trial.

Below you may see how some of JS community leaders reacted to this crime.

You can see the Black Lives Matter banner on the official TypeScript home page, and the futuristic city turned from bright blue colors to black.

The React.js community couldn't ignore the event and added the Support the Equal Justice Initiative banner to the home page. In addition to the official community response, many developers from the React Core Team also expressed their support. In particular, they staged a virtual walkout Monday over CEO Mark Zuckerberg's decision not to take action on a series of controversial posts from President Donald Trump last week. Dan Abramov twitted: 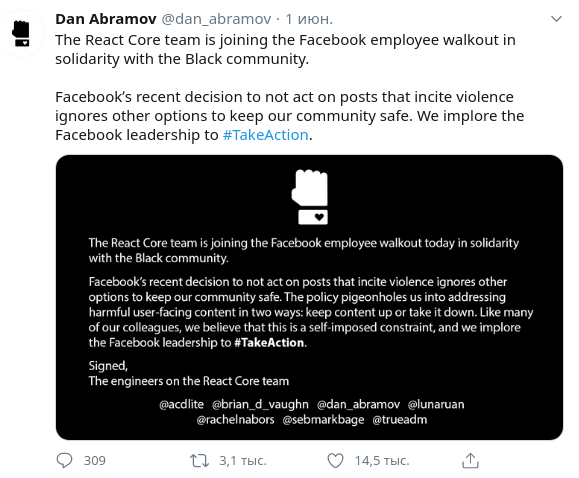 As a gesture of solidarity, the Angular official website is now using a dark color scheme and has the #BlackLivesMatter banner at the top: 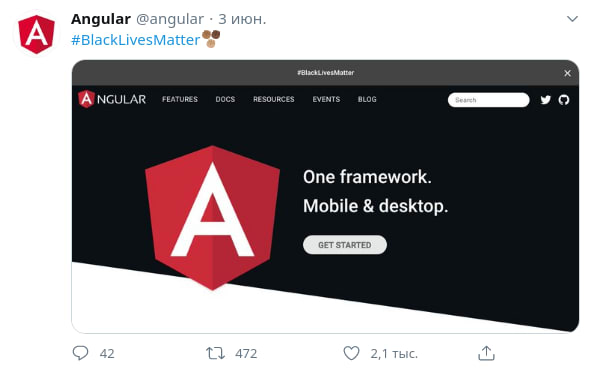 Babel has gone further: on June 3 the official site was shut down and the following message was shown to all users: 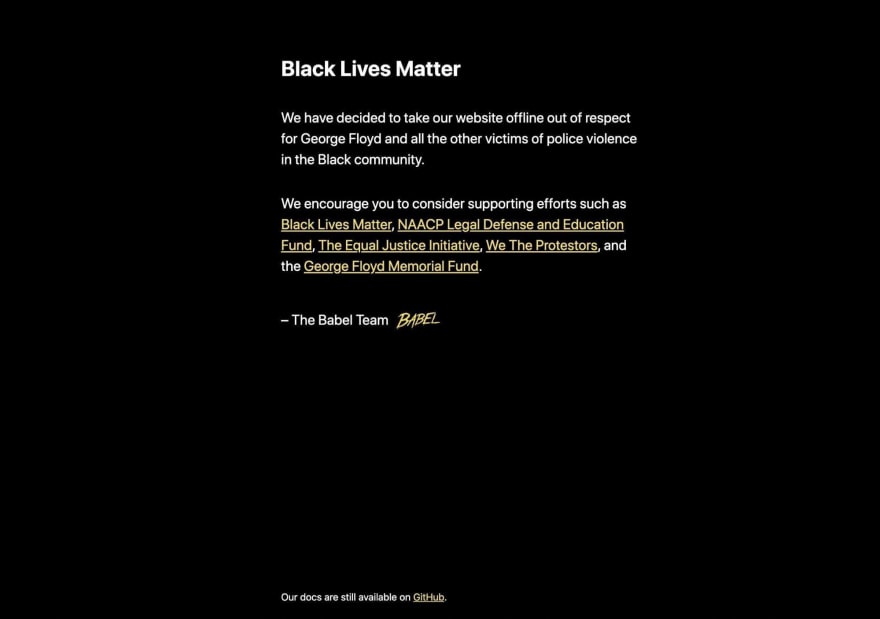 The Electron home page displays the post with the signatures of the Electron community. 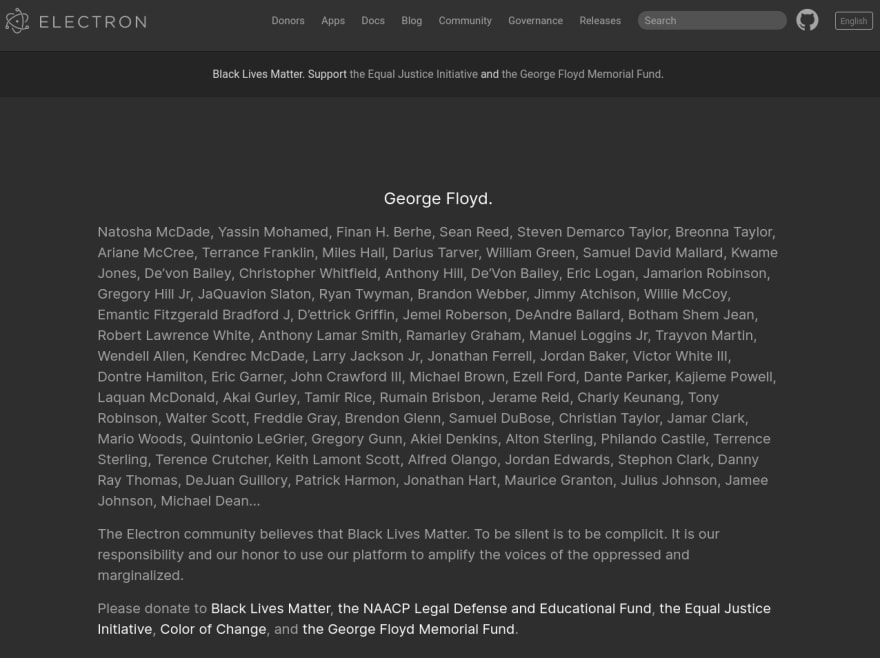 In addition to some words of support, there are also the donation links to support the movement and Floyd's family.

Our team stands in solidarity with the rest of the JS community and takes unprecedented measures - the light theme is temporary unavailable in the application, and the #BlackLivesMatter banner will appear at the top of the screen after running the app. Current users would also have to use a dark theme. 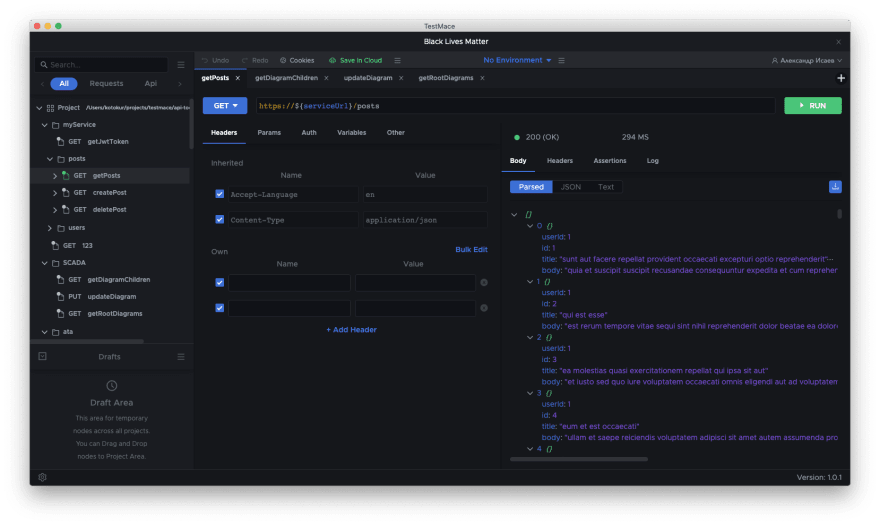 As you see, the big players of the JS community couldn't be silent and explicitly supported the movement. We are convinced that it is our responsibility, too. In this case, to be silent means to be complicit. To be silent today is to endanger yourself and your family tomorrow. TestMace wishes to express its deep sorrow to George Floyd's family and stands against racial inequality and police brutality.

Let us know about other companies’ support campaigns in the comments below.

Dmitrii Snytkin
Hi! My name is Dmitrii, I'm a software developer enthusiast. I work on a new advanced IDE to work with API TestMace
Why TestMace has chosen Electron
#javascript #webdev #startup #showdev

Once suspended, dimansny will not be able to comment or publish posts until their suspension is removed.

Once unsuspended, dimansny will be able to comment and publish posts again.

Once unpublished, all posts by dimansny will become hidden and only accessible to themselves.

If dimansny is not suspended, they can still re-publish their posts from their dashboard.

Once unpublished, this post will become invisible to the public and only accessible to Dmitrii Snytkin.

Thanks for keeping DEV Community 👩‍💻👨‍💻 safe. Here is what you can do to flag dimansny:

Unflagging dimansny will restore default visibility to their posts.