Disclaimer: The context of this blog post are systems with a fair number of API/transaction requests per day (e.g. 50k+) with API calls (almost) every second for the majority of the day, and standard non-functional requirements like response times must be way below 1 second, top-notch security, etc. This is not addressing hobby projects with public access to everything and occasional 1-2 API calls per day and/or a single monthly peak of 1000 API calls/hour!

Being aware of the latest serverless trend I started a project with the "fully serverless" approach in mind, which in MS/Azure world means Azure Functions framework for building our .NET Core applications, and using Azure Functions Hosting Plans on Azure. The Azure Functions were "hidden" behind Azure API Management (APIM), so that JWT Tokens (from a web-based backoffice UI) and api keys (from B2B integrations) could be centrally validated.

Fast-forward to today and we are currently using none of these:

Instead we are pretty happy with these:

Why did we change our mind? There were numerous reasons for that, and I will try to explain each one below. But first a short overview of Azure Functions and APIM.

An Azure Functions App can be hosted in multiple ways:

When I read the list I was thinking - wow, I can't go wrong with Azure Functions, even if one hosting option turns out to be sub-optimal there are so many others! Upon a second look though 2 of the options should be removed straight away:

So you are effectively left with options 2, 3 and 5.

Azure Functions as Application Framework with .NET Core 3.1 takes your "functions" decorated with a FunctionName attribute, and runs them in a magical way 1 within the Azure Functions WebScript Host (provided by MS). You do not have a Program.cs/fs with main or similar, if you want to wire up some start up code you have to implement a class and use an assembly-level FunctionsStartup attribute so that the Azure Functions runtime can find it (awkwardness to the max ;)

Azure Functions with .NET 5 lets you run your code in a separate process and you have a Program.cs/fs with main, however all calls to your code will be passing first the Azure Functions WebScript host and then the latter will invoke your code via GRPC 2 ...

APIM is a pretty sophisticated service which wants to intimately know your APIs. You import your Open API / Swagger yamls for example, and it enumerates all operations, so it understands your APIs. Based on that APIM can also render a Web UI where you can list your APIs, test them, etc. Defining Products and Subscriptions comes on top, as well as various Policy which can be injected at different levels.

APIM comes in several tiers, but note that even though most of them may support your requests/second requirements, only 2 of them have VNET support: Developer (non-production use) and Premium (at staggering EUR 2350/month).

Reasons for migrating away from Azure Functions + APIM

In contrast, AKS node billing is actually the standard Azure Virtual Machine billing, so you can get a standard VM with 2 vCPUs + 8 Gb RAM for as low 70-80 EUR/month excluding any discounts for 1-3y reservations, or spot pricing, etc.! Traefik is an open-source project with a pretty sufficient for our uses free community edition ...

We experienced serious problems running 5 different function apps only on the smallest SKUs of Azure Functions Premium (EP1) or App Service Plan (P1V2) ... Not only the applications were slow at processing a very low number of requests, but the memory utilization was very high (due to only 3,5Gb of RAM, much less available though).

In contrast, we are easily running almost 50 apps in AKS per node (every node with 2 vCPU + 16GB RAM, costing around 90 EUR/month), with less than 20% max CPU utilization and less than 55% RAM utilization ... 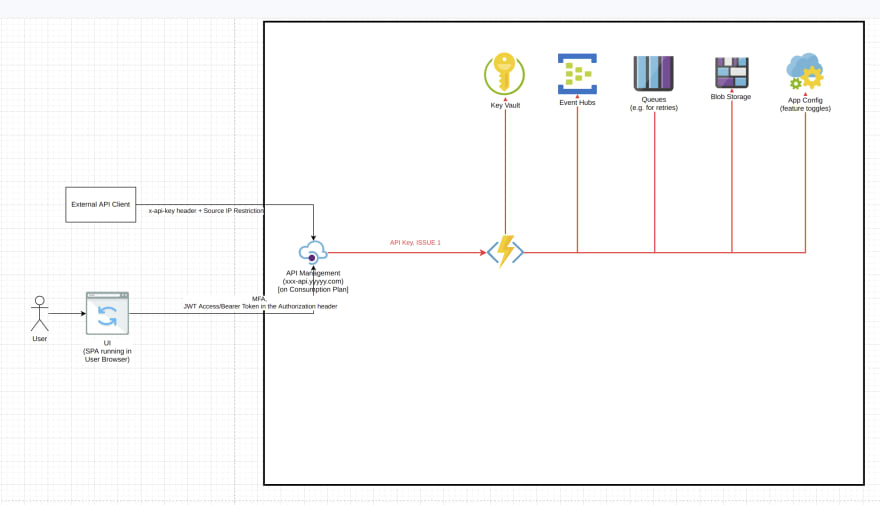 You are using the "serverless/consumption" versions of Azure Functions and APIM ... you will be surprised by quite a few imho unsurmountable security challenges:

On both App Service Linux and Windows Plans we experienced very high CPU peak every time we deployed (incl. slot swap). We had only a few (max 5) function apps hosted on the smallest (1 vCore) instance, with no application load whatsoever (no requests). Microsoft Support's answer was: "It is normal to have some CPU increase during deployment for a short period of time and it should not impact the overall availability of the functions.". Of course, it did affect the performance of the functions dramatically ...

With the App Service Plan the deployment is handled by the Kudu management container where it is using the local storage for deployment which is also slower and besides this there are some additional intermediary steps in the deployment.

Additionally, we experienced from time to time failed deployments with errors like "Bad Gateway 502", or sometimes 409.

I think there is a general issue with the performance of function apps on the App Service Linux plan, and that may be the root cause for the deployment issues …

In contrast, deploying to AKS is very fast (less than 50 seconds) and has no measurable impact on the CPU utilization of the node (2 vCPU, 16 GB RAM).

In the context of Microservice Architecture sooner or later you will need to have synchronous (REST or GRPC) calls from one app to another. Yes, you should try not to have such, yes, you should try to make everything based on events/messages via message bus ... however, the reality is that you will definitely reach some consistency limitations which will force you to have such inter-service calls.

In case you are using Azure Functions Subscription Plan you will be charged for every inter-service call ... imagine you have an orchestration service1, which is making a GET to service2, then making POST to service3 and service4 ... then you will be charged for additional 3 calls for every API call to the orchestration service.

In case of Premium or App Service Plan, your inter-service calls will traverse the Azure network stack, which is much slower than having service calls on the same node as is the case for AKS. We were even forced to deploy several microservices as 1 deployment unit with in-process calls instead (using project references, which was causing a big deployment mess) ...

Long story short, my personal recommendation is: do not waste your time with Azure Functions hosting (or even application framework) and APIM for any serious project with standard security/performance requirements, and with the goal of having competitive pricing for hosting ... Or in other words, use Azure Functions only for quick-and-dirty hobby projects, or one-off jobs (maybe some glue infrastructure code), or in case performance, security and costs are absolutely no factors.
Additionally, value your time and better invest in learning something standard like Kubernetes where you can use your knowledge across clouds and on premise, instead of learning all Azure Functions peculiarities, which IMHO may be a result of Microsoft's trying to reuse existing (but with lots of heritage) Azure App Service/Web Script platform/framework for Azure Function ...

If there is interest I could create another post showing how to do the above ...

Chainlink External Adapters, Sanity, ERC20 and stuff like that – Part 1: Setting up Sanity.

Once suspended, deyanp will not be able to comment or publish posts until their suspension is removed.

Once unsuspended, deyanp will be able to comment and publish posts again.

Once unpublished, all posts by deyanp will become hidden and only accessible to themselves.

If deyanp is not suspended, they can still re-publish their posts from their dashboard.

Once unpublished, this post will become invisible to the public and only accessible to Deyan Petrov.