As the title suggests, we are excited to share that the DEV team is now fully distributed! We’ve gone through a few iterations of how we work (office to distributed), so I thought it’d be nice to share a bit about our background and how we came to this decision.

Back in 2016, Ben & I were building DEV as a side project — we were working from Ben’s basement and various coffee shops in Brooklyn, NY. In parallel, Ben & Peter were working full-time on another startup with an office space in Manhattan. They worked out of a tiny room in a building in Flatiron (fun fact: theSkimm were previous tenants of that room) with a couple other team members. This is what that room looked like: 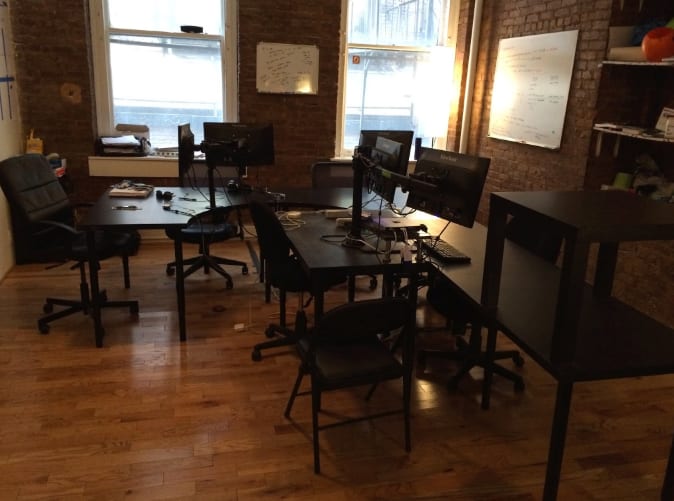 By early 2017, it became apparent that neither Ben nor I could balance full-time jobs while properly serving the DEV community. We spoke to Peter and decided to join forces and pursue DEV together as a founding team. This meant that the entire team piled into that same tiny office. Needless to say, I helped make some layout changes for the better: 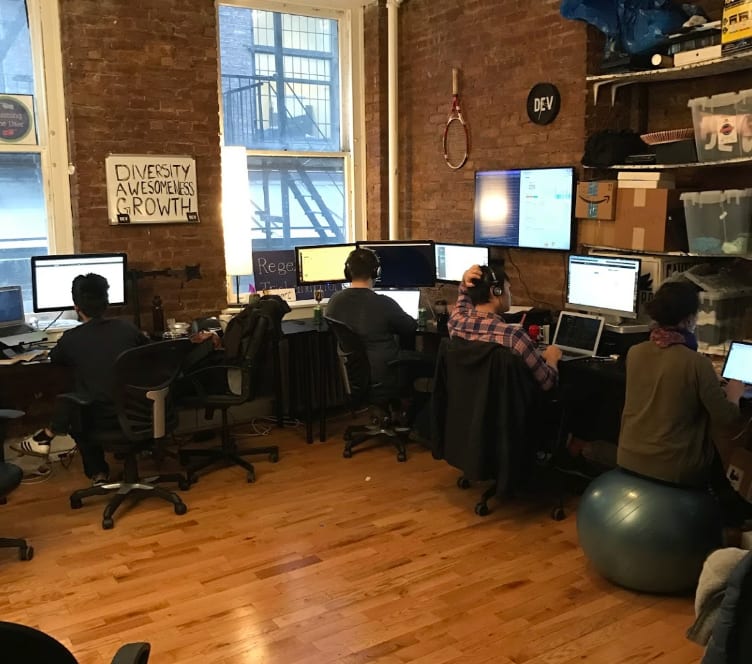 From day one with the newly formed company, we discussed the idea of being remote friendly, though the concepts of what we now think of as a “distributed team” had not entered our lexicon. The DEV Community itself is a distributed ecosystem, and we wanted our team dynamics to reflect that. However, we weren’t even close to ready, and we knew that (sort of).

Even though we had an office, we didn’t want to be limited to NYC talent. That Spring, we added one fully-remote apprentice to the team. As with all of our apprenticeships, we got some solid contributions and were able to provide mentorship. However, we learned the difficulties of communicating with a single remote team member, especially a more junior one. We had trouble balancing the unbalanced team dynamics. It was a step in our journey and a valuable learning experience.

We eventually moved into a much bigger shared office with our friends from Timber. The space was and is great, but the commute wasn’t the easiest. As a result, pretty much everyone on the team began to integrate regular “work from home” days into their routine.

This shift helped us to start understanding what it would take to become truly “remote-friendly.” We began codifying our processes to support asynchronous work and we started standardizing our communication tools and protocols. Little things can make a huge difference — such as ensuring that everyone dials in individually for a video conference, even if multiple people are in the same office. We took steps to make sure that all team members, in the office or at home, were always on an even playing field.

Over time, we became “friendlier” and friendlier to distributed work. We ended up hiring our first two fully-remote team members. Around the same time, Ben moved out of NYC, and began to regularly work from his new place in Beacon, NY. This combination served as a powerful forcing function, forcing us to turn distributed work into a core strength, and removing any remaining pressure for team members to go into our physical office.

This shift also allowed us to codify our process that all future positions would be remote-first. We began hiring from the DEV Community and proceeded to welcome 6 new team members, all of whom work primarily or completely remotely.

Fast forward to today — we have officially closed down our Brooklyn office, and the DEV team is now 100% distributed. We have team members in four US states and three countries across the world.

Here are just a few reasons why we’re so excited about this development for our company:

The below statement is outdated. We have closed our hiring process, but we will be opening up another hiring push in the not-too-distant future.

On that note — if distributed work sounds exciting to you, I’m happy to share that we’re hiring for a number of roles:

Come work with us!

What jobs exist in IT?

How do you manage re-usable code snippets?

Contribute to Forem
What *new* technologies do you most want to learn?
#discuss #career
Name your top 3 favorite software products that you use
#discuss #productivity
Happy Global Accessibility Awareness Day!
#meta #a11y