In the previous carousel, we completed a whole series called "Developer Relations --- Digging Deeper" with its last edition "Developer Experience Specialists", where we decoded the various roles in developer relations and what exactly they do? Make sure you check them out here.

Coming to this carousel, we're talking about something different. Although we'll still be talking about DevRel, this time we wanted to explore the target market that DevRel hits. Today, we'll take a look at the Business to Developer, ie. the B2D Sector. It's also worth mentioning that previously we decoded Developer Marketers, who play a key role in the marketing aspect here, an essential part of the B2D sector. 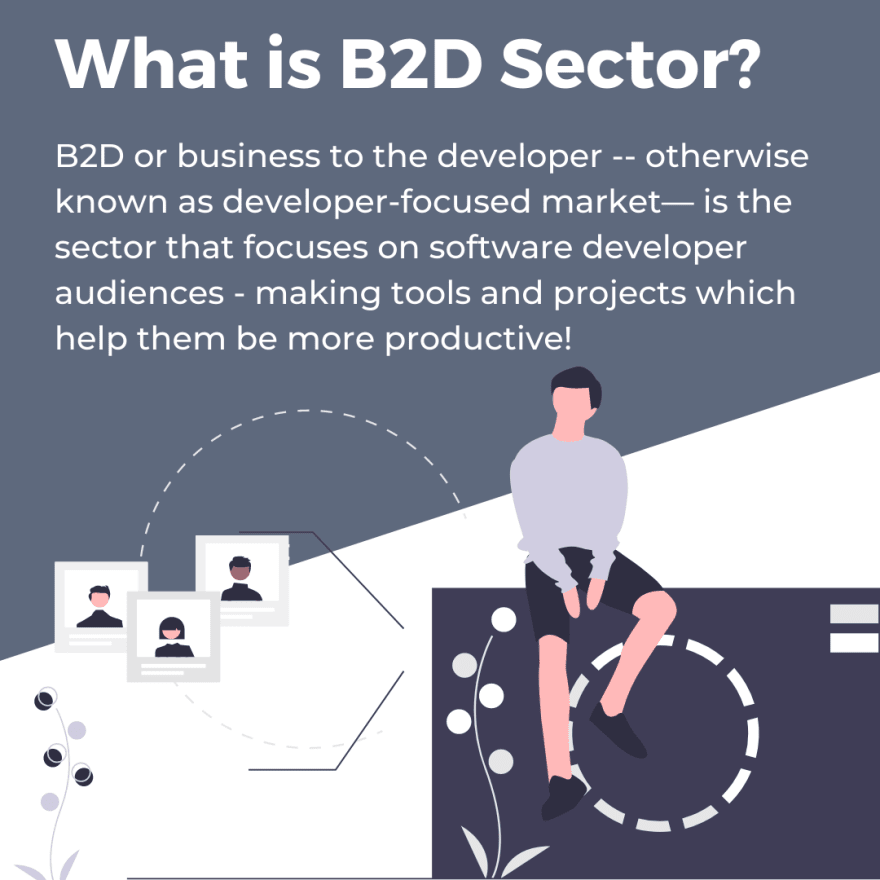 What is the B2D Sector?

B2D or business to the developer is a sector that focuses on the developer-focused market. Software/ Hardware Developers, basically people who tend to spend their time working with "code" are the main target audiences. Most commonly, here the main focus of the business is towards creating tools and systems which make these Developers more productive and focused on the product they're looking to develop, rather than dealing with additional things that come up with building scalable software. Most of the successful B2D companies combine a mix of developer marketing along with developer relations techniques to drive the ongoing engagement throughout the developer journey. 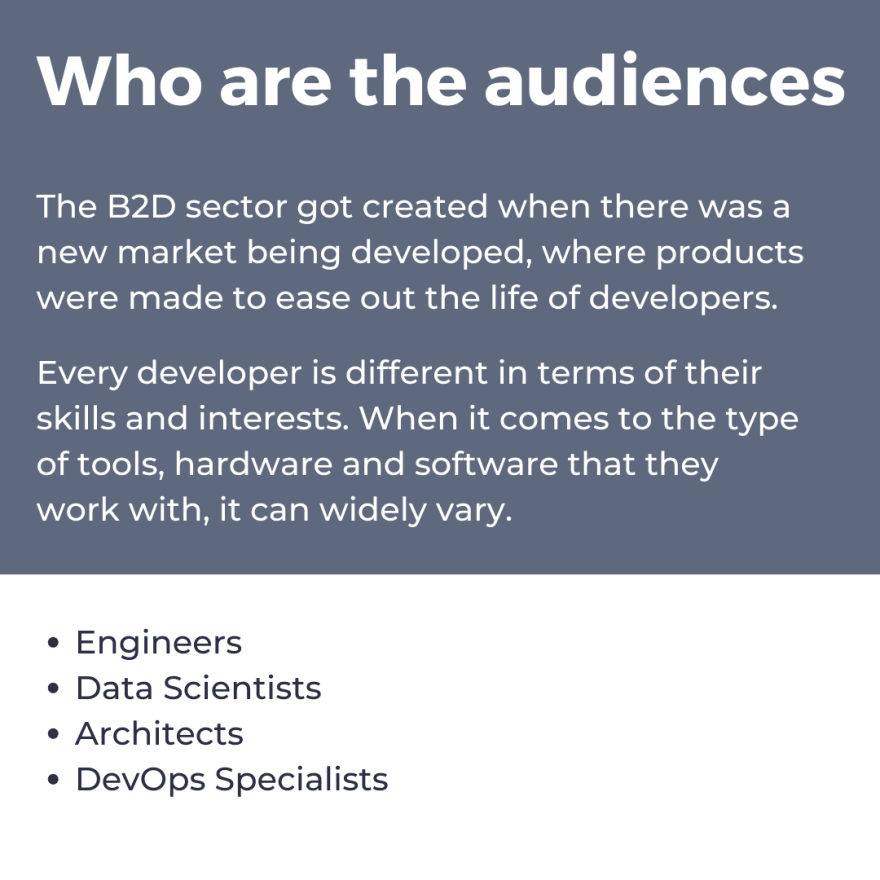 Who are the audiences?

The need for the B2D sector arose when the standard business practices started to fail for major companies for this new audience that was being developed. The developer audience was difficult to characterise within the standard B2B and B2C categories. Here, one cannot focus on sales, nor mass marketing. Both traditional practices fail when this audience becomes in charge of purchasing the product. Here, the product became the king. Showing the product's real use case, regular improvement in functionality, and building a trustworthy community around it became the major way of driving the adoption.\
What makes this market more interesting is knowing that every developer is different in terms of their skills and interest. Hence, the types of tools, hardware and software that they can work with, translates to again their knowledge and interest around a niche category. This is a major reason why you might see a lot of hobby projects becoming full-scale businesses in the very short term and even major businesses becoming obsolete in a matter of days in this sector. The community people build around their product fuels their business growth and product development.

The modern-day, Developer market, according to us can be broadly classified into the following 4 categories -

It is important to note that this segregation is not absolute. As we have mentioned before, the skills and interests of developers may vary heavily. This will definitely cause interdisciplinary fields to occur. The broad classification here helps us understand the product and tools that are developed in this sector more clearly. 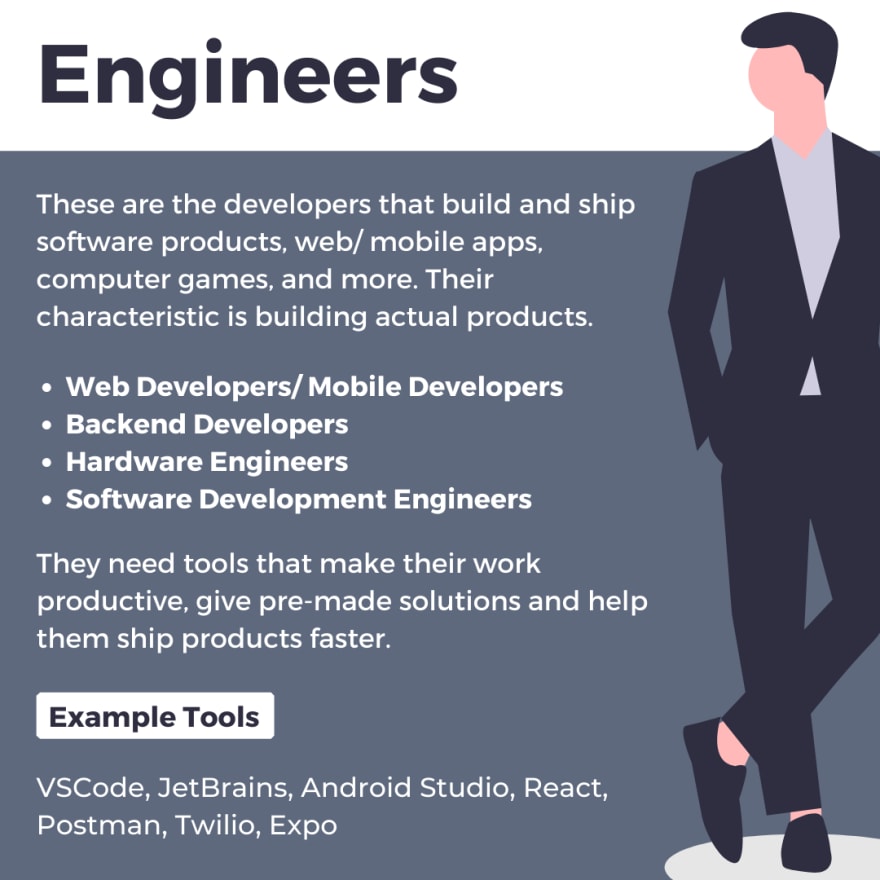 Engineers, to be honest, is a very broad term and can be used as a synonym for Developers almost always, but here we are talking about folks who build and ship products, web/ mobile apps, computer games, and more. Their characteristic is building actual products, usable by the masses.

They are builders at heart and need tools that can help them create and optimize solutions to existing problems. Talking about the roles, we can consider the following as a categorical example of the folks who are dedicated to actually building things:

For creation and development, it's important to find tools that make their work productive. This might be achieved by 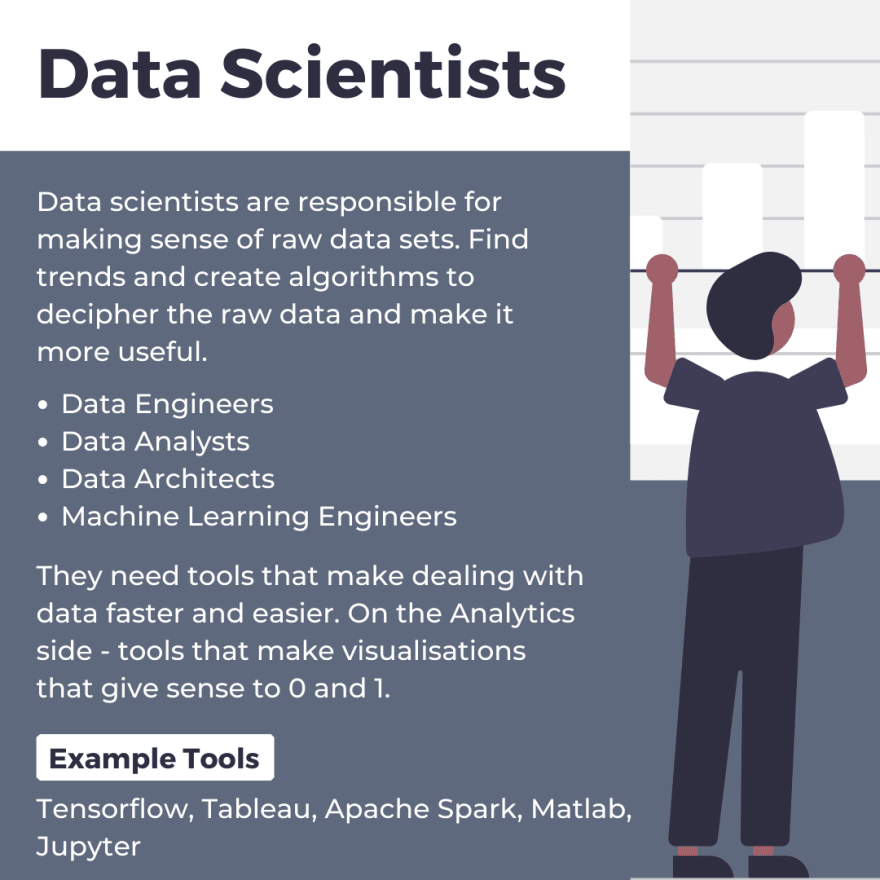 Data scientists are responsible for making sense of raw data sets. They are basically engineers of information. They are responsible for finding trends in data and creating algorithms to decipher the raw data, making it more useful to solve a particular business problem. This role has a lot of alignment with technical roles, including mathematician, scientist, statistician and computer professional.

The demand for data science skills has grown significantly over the years, as companies look to glean useful information from big data, the voluminous amounts of structured, unstructured and semi-structured data that a large enterprise or internet of things produces and collects.

Given that data Scientists are responsible for collecting, analyzing and interpreting large amounts of data, they need tools that make dealing with data faster and easier. On the Analytics side --- tools that make visualisations that give sense to 0 and 1. 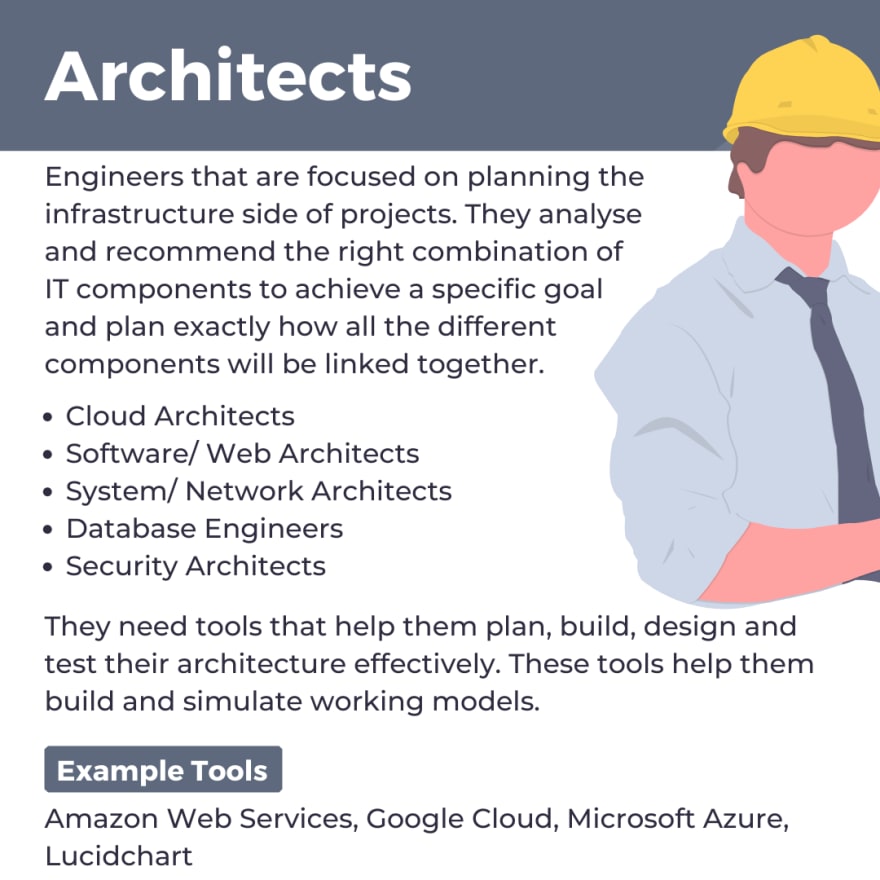 Architects, as the name sounds, are people who focus on planning the infrastructure of the projects that will later be built by the engineers. They analyse and recommend the right combination of IT components to achieve a specific business goal. Not just that, they optimise the infrastructure to give maximum output at the minimum cost, counting for horizontal scalability in the future to accommodate the business growth. They are the main folks who determine how the different components of a network will be linked together to produce a secure and effective way of running the system.

Architects can be broadly classified into -

Tools that they use need to be specifically built to help them in planning (Lucidchart), building and testing their infrastructure (Amazon Web Services, Google Cloud, Microsoft Azure), before implementing it for the use of engineers. The tools they use need to have the ability to let engineers build, simulate working models and test the development environment. 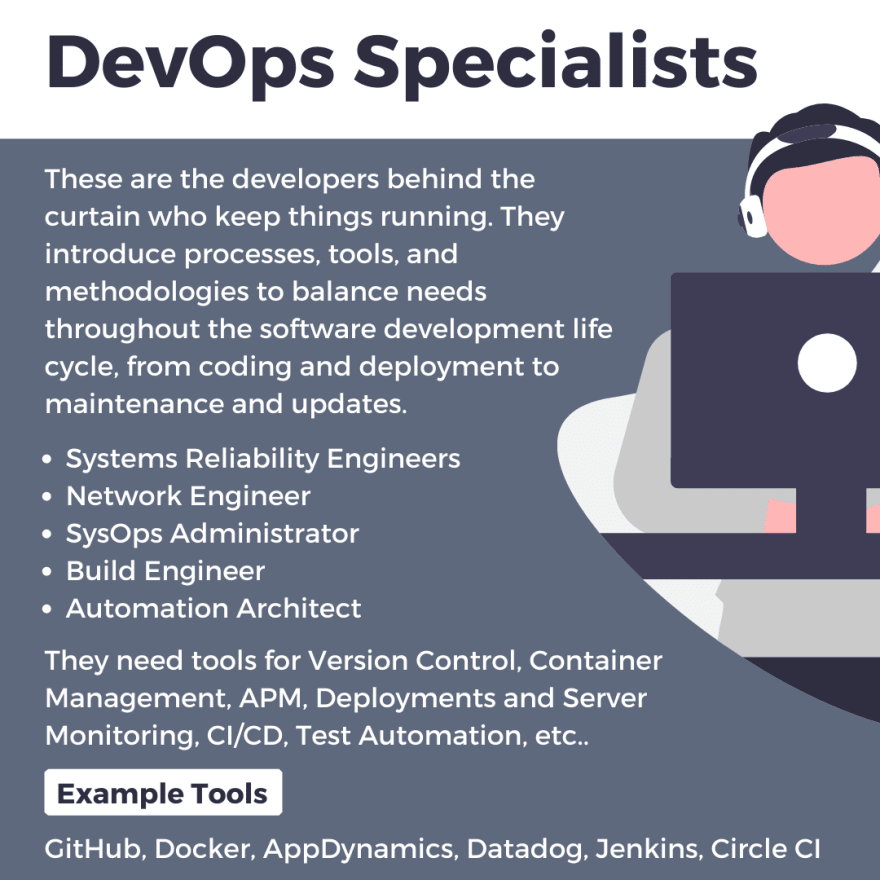 Developer Operations or DevOps is the field responsible for introducing processes, tools, and methods to balance the various needs throughout the software development life cycle, from coding and deployment to maintenance and updates. They are folks behind the curtains who keep things running. They can be classified based on the type of process they work in, under DevOps.

The majority of the work they do revolves around working around reducing the complexity, closing the gap between actions needed to quickly change an application and tasks to maintain the complete system's reliability. It's also important to understand that DevOps more than the engineers also falls down to the adoption. It depends on the changes and the process, this takes a lot of effort from an organisational perspective to strengthen and integrate the connection between developers and operational teams. 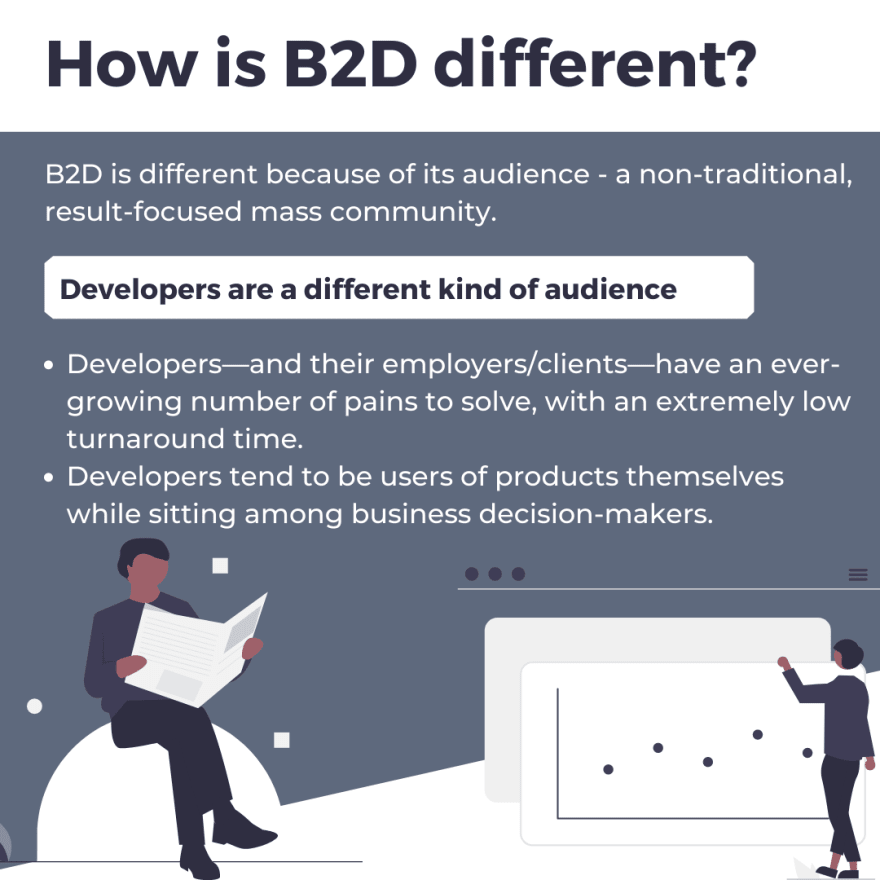 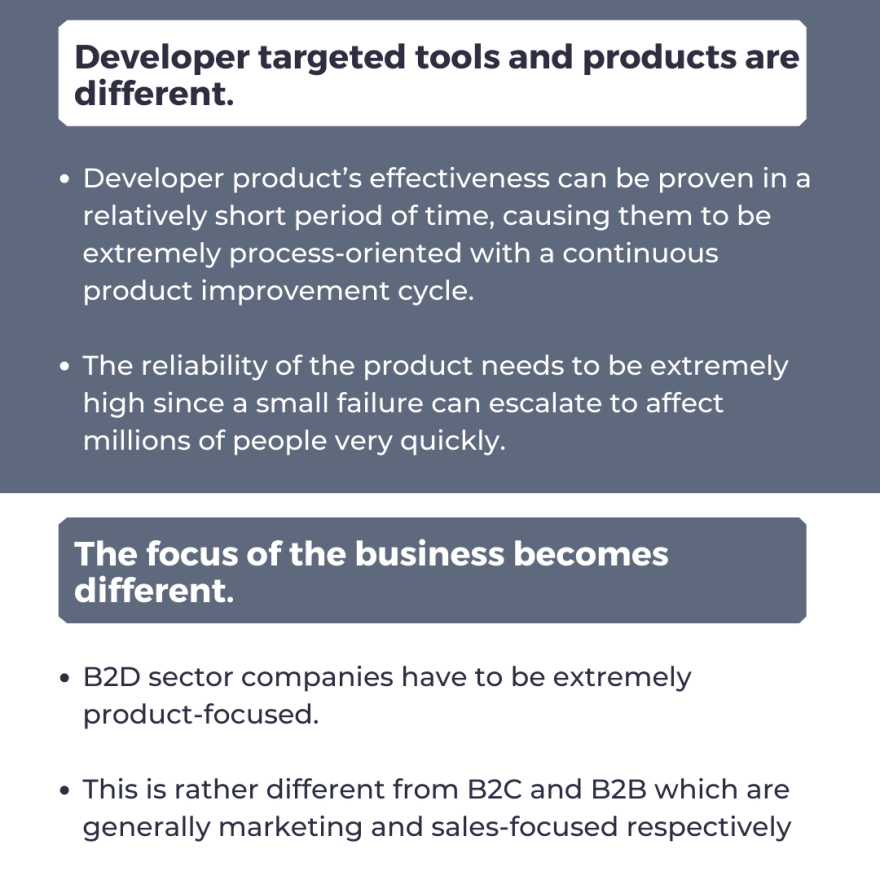 How is B2D different?

B2D is mainly different because of the type of audience it targets/ wants to target --- developers.\
Developers come from a very non-traditional, result-focused mass community. They expect and want the problems to be solved while completing the whole process with minimal effort and the lowest consumption of time and resources. Developers will always be a different kind of audience --- this also includes their employers and clients. They focus on the problems that are ever-growing and need a solution with an extremely low turnaround time. Most of the time, developers themselves tend to be the users of the product while sitting among folks who make business decisions about the very same product.

The effectiveness of the tools used by developers can be proved in a relatively short period of time. This leads those products/tools to be extremely process-oriented which definitely has to involve a continuous improvement cycle. Most of the time, developers make products for solving problems faced by millions, thus, impacting millions of lives directly. So, the product needs to be extremely reliable with minimal downtime. All of the above reasons make developer-targeted tools and products very different from other traditional products.

When we look into the B2D sector, the companies will be product-focused --- which is a no brainer. Whereas, B2C is marketing focused and B2B is heavily focused on sales. So, the business focus in B2D becomes different from B2C and B2B. 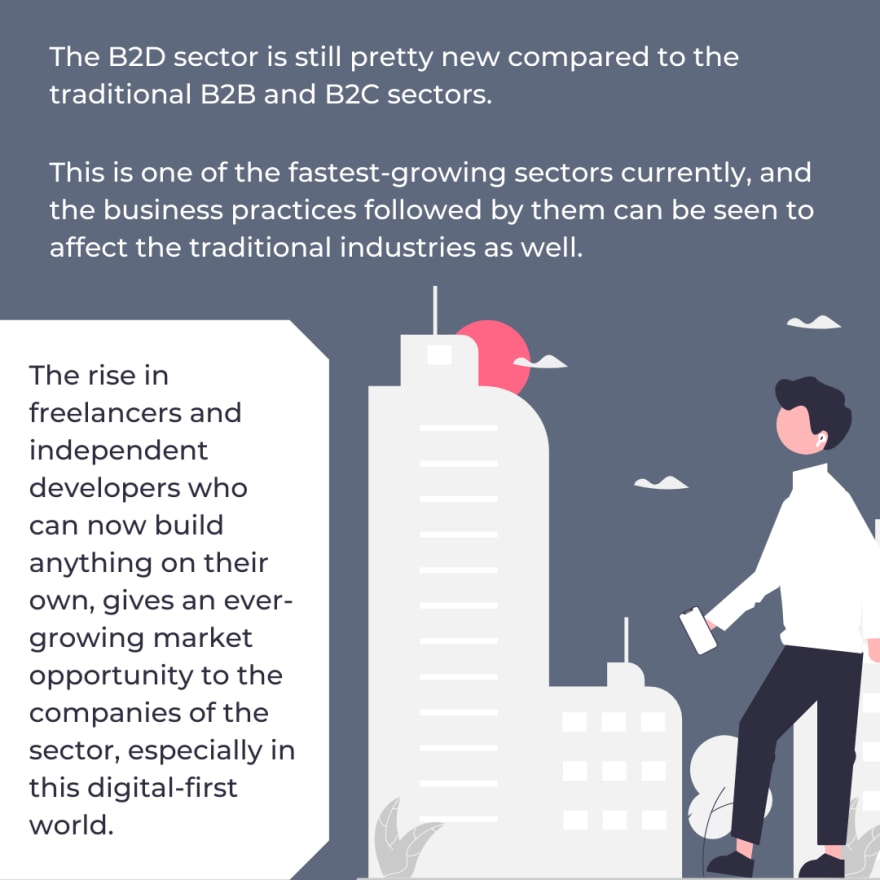 Compared to other forms of sectors out there, B2D is still relatively new. But at the same time, it's proven to be one of the fastest-growing sectors currently. The B2D sector, given its focus on such a unique targeted audience --- developers, has given rise to process and business practices that never existed before. Looking at the magnitude of change it brought to the business world, many have kept those an idol to implement similar changes in the traditional industries as well.

Given the age of digital literacy, almost everyone is a developer of some kind. This has given rise to freelancers and independent developers, who with the help of these developer tools are able to build and ship complete products from scratch --- all by themselves --- something which took a whole corporate organisation to come up with, just a few years ago. All of this has provided an ever-growing market opportunity to companies who want to focus on developers. The B2D sector, along with the awesome DevRel folks working to make it successful, is going to stay here for a while, disrupting the industry like never before.

Day 21 of #100daysofcode: Your code will haunt you