Linters. The little things that remind us of every mistake we ever made. That is one definition of linters. In this blog, I will try to get you a little bit closer to linter architecture, usage, and benefits of using a linter. Buckle up, and prepare to find out what are those little sneaky things that always know when you're wrong!

Lint, or a linter is a static code analysis tool, that is used in such a way, that can flag programming errors, bugs, bad constructs, or stylistic errors.

Stephen Curtis Johnson, a computer scientist who worked at Bell Labs, father of the Yacc, spell, Portable C Compiler is also the father of the Lint.

The term "lint" was derived from the name of the tiny bits of fiber and fluff shed by clothing. In 1979, lint was used outside of Bell Labs for the first time in the seventh version of the Unix operating system.

Analysis that a linter is performing can also be performed by an optimizing compiler, which aims to generate faster code.

Lint-like tools are especially useful for dynamically typed languages, like JavaScript and Python.

💡 Dynamic type checking is the process of verifying the type safety of a program at runtime.

📈 A LITTLE BIT ABOUT STATIC ANALYSIS

Static Analysis means that automated software runs through your code source without executing it. What it does is, statically checks for potential bugs, memory leaks, or anything else that may be useful.

The neverending battle as shown in the image has caused too many casualties. Then one day, the brave coding general stepped with his iron foot on the mountain bigger than the sky and yelled "Code standardization!!!"

Standardizing your code is very important. Having a guideline and running linters against the codebase avoid aesthetical changes in your pull request, like replacing all tabs for spaces, variable assignment indentation, or similar.

Did you know that in CSS, the Universal selector (*) may slow down a page loading time? Many linters include a performance check. They can add different kinds of performance improvements for experienced and newcomers developers.

There are many benefits of using linters. Beside code standardization, linters improve code review discussion level, it can make code look like it's written by a single person and much more.

ESLint is an open source JavaScript linting utility originally created by Nicholas C. Zakas in June 2013. JavaScript, being a dynamic and loosely-typed language, is especially prone to developer error. Without the benefit of a compilation process, JavaScript code is t typically executed in order to find syntax or other errors.

🤔 PHILOSOPHY (according to ESLint) 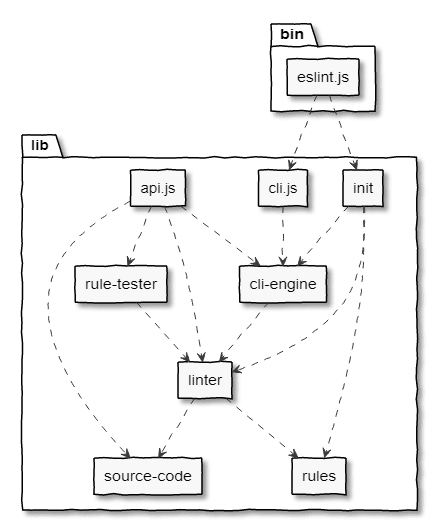 THE CLI OBJECT
The CLI object is the API for the command line interface.

The CLI object may not call process.exit() directly, and perform any asynchronous operations.

The CLIEngine type represents the core functionality of the CLI except that it reads nothing from the command line and doesn't output anything by default. Instead, it accepts many (but not all) of the arguments that are passed into the CLI. It reads both configuration and source files as well as managing the environment that is passed into the Linter object.

Main method: executeOnFiles() - accepts an array of file and directory names to run the linter on.

The main method of the Linter object is verify() and accepts two arguments: the source text to verify and a configuration object (the baked configuration of the given configuration file plus command line options). The method first parses the given text with espree (or whatever the configured parser is) and retrieves the AST. The AST is produced with both line/column and range locations which are useful for reporting location of issues and retrieving the source text related to an AST node, respectively.

The LINTER object may not:

Individual rules are the most specialized part of the ESLint architecture. Rules can do very little, they are simply a set of instructions executed against an AST that is provided. They do get some context information passed in, but the primary responsibility of a rule is to inspect the AST and report warnings.

These objects responsibilities are:

These objects may not: 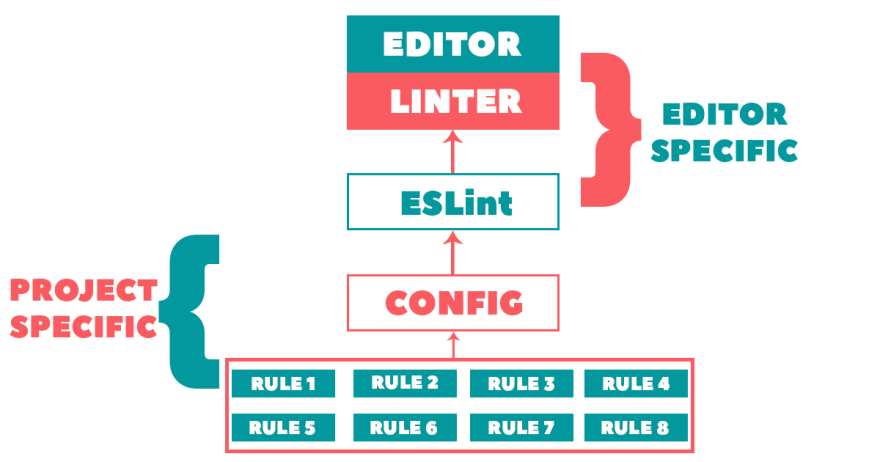 🙏 THANK YOU FOR READING!

Have a nice time!

Once suspended, devlazar will not be able to comment or publish posts until their suspension is removed.

Once unsuspended, devlazar will be able to comment and publish posts again.

Once unpublished, all posts by devlazar will become hidden and only accessible to themselves.

If devlazar is not suspended, they can still re-publish their posts from their dashboard.

Once unpublished, this post will become invisible to the public and only accessible to devlazar.

Thanks for keeping DEV Community 👩‍💻👨‍💻 safe. Here is what you can do to flag devlazar:

Unflagging devlazar will restore default visibility to their posts.