Hey! Welcome back to another interesting read of this series. We will be talking about the Layer 0/1 blockchain technologies, what they are, their mechanisms, pros and cons and finally the impact they have on the whole web 3.0 ecosystem. Grab your coffee, let's go!!!

From our last read, we talked about the transition of the web and the people. The implications and what we should be looking out for in the new ecosystem and then the technologies stack being used to propel this ecosystem. Let's refresh our mind with the web 3.0 stack diagram again before we dive in to explore the layer 0/1 technologies

BLOCKCHAINS
Blockchains! So what is a blockchain? According to Wikipedia,

“A blockchain is a growing list of records, called blocks, that are linked together using cryptography. Each block contains a cryptographic hash of the previous block, a timestamp, and transaction data (generally represented as a Merkle tree). The timestamp proves that the transaction data existed when the block was published to get into its hash. As blocks, each contain information about the block previous to it, they form a chain, with each additional block reinforcing the ones before it. Therefore, blockchains are resistant to modification of their data because once recorded, the data in any given block cannot be altered retroactively without altering all subsequent blocks.
Blockchains are typically managed by a peer-to-peer network for use as a publicly distributed ledger, where nodes collectively adhere to a protocol to communicate and validate new blocks.”

Simply put, it can be described as a decentralized, distributed, and oftentimes public, digital ledger in which blocks of data are used to record transactions across a network computers so that any involved block cannot be altered retroactively, without the alteration of all subsequent blocks. More about blockchains in depth can be found here in a blog as explained by a Principal Blockchain Engineer, where he breaks down with diagrams the underlying mechanisms of blockchains.
This article is focused on discussing the Layer 0 and Layer 1 blockchains with their architectures, the different consensus mechanisms involved and how these technologies are used in solving real world problems.
Worthy to note that this article is not geared towards comparing and contrasting blockchains. We will focus on that in future publications.

LAYER 0 BLOCKCHAINS
Think of Layer 0 as the base environment where all other layers can be built and operated on. ”Layer 0 is a network framework running beneath the blockchain. It is made up of protocols, connections, hardware, miners, and more that forms the foundation of the blockchain ecosystem.” - CoinMarketCap.
The Layer 0 protocols consist of a series of state channels that validate data based on user-defined functions. It is the ground floor for all blockchain protocols. It allows for the entire blockchain to be built on top of it and also it allows for cross-chain interoperability between blockchains built on them. This means that different blockchains can interact with each other which is a feature missing on Layer 1s blockchains. It also supports several consensus algorithms and P2P systems, such as proof-of-work, proof-of-stake, proof-of-activity, proof-of-reputable observations, directed acyclic graphs (DAG) and more to optimize network topology. Layer 0 compliments the significant pillars of blockchain which are: scalability, neutrality and interoperability.
Typical examples of Layer 0 protocols or networks are Polkadot and Cosmos network. 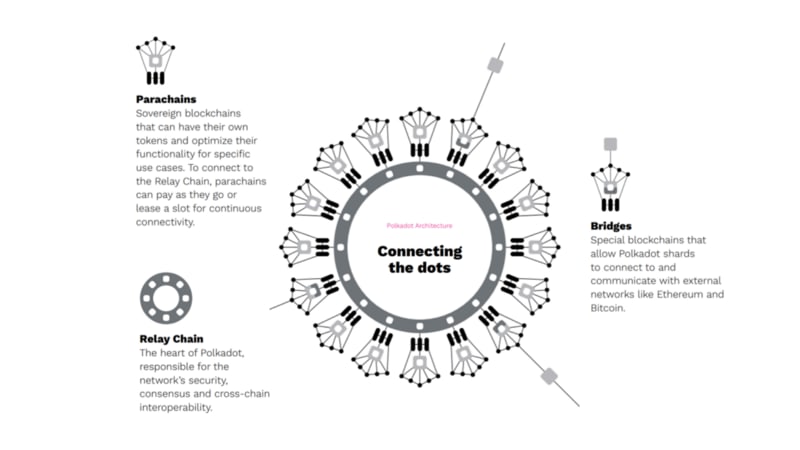 USE CASES FOR LAYER 0 BLOCKCHAINS

LAYER 1 BLOCKCHAINS
Think of Layer 1 blockchains as “a set of solutions that improve the base protocol itself to make the overall system a lot more scalable.” - CoinMarketCap.
Layer 1 represents the data layer, network layer, consensus layer and activating layer in the blockchain logical architecture. It generally requires modifying the block capacity, block generation time, consensus mechanism and other inherent properties of the blockchain to increase the trading capacity. It has a major challenge which is Scaling. Some innovations around scaling Layer 1 blockchains are: Change in consensus mechanisms, sharding, using light clients and sidechains(Layer 2).
Examples of Layer 1 blockchains are Bitcoin, Ethereum,Terra, Avalanche, Fantom, Harmony etc.

USE CASES FOR LAYER 1 BLOCKCHAINS

RELEVANCE OF BOTH LAYER TO THE WEB 3.0 STACK
Whether you are building relay chains or para-chains on top of Layer 0 blockchain or running smart contracts on EVMs on the Layer 1 network, both layers serve as a significant ground where all the blockchain innovations take place. From the block production, type of consensus mechanism at work, transactions, validations, securities etc. With the existence of any of those layers in our stack, we can start implementing other technologies in our stack either to provide more scalability, security, interoperability or other ground breaking features they have to offer us in building impactful blockchain applications.

CONCLUSIONS
One of the differentiating factors between the different layers explained in this article is their consensus mechanism. While some of them runs a proof-of-work (PoW) mechanism which is anti-scalable as it sacrifices scalability for more decentralization and security, some runs on the popular proof-of-stake (PoS) which allows scaling to be achieved without sacrificing much of security and decentralization in the network or rely on the main chain for security. Other notable consensus mechanisms are: Delegated Proof of Stake, Proof of Earn, Proof of Activity, Proof of Burn etc.

In conclusion, blockchain technology is still in its early phase and evolving. We will keep seeing innovations around the already existing solutions and new innovations too will emerge. Understanding the different base layers as seen in this article will help one understand the innovation around a particular blockchain network or entity. It will also help builders in choosing what works best for the idea they have.

In our next series, we will be looking at some of the scaling innovations to these base layers and networks such as the layer 2, lightning networks, zero knowledge syncs etc.
Feel free to leave a comment and any questions. See you soon!!!

BBC Micro:bit — a story of curiosity