So, I run the DesignCourse youtube chan which recently just passed the 500k subscriber mark. I teach UI/UX and Frontend Development. I've uploaded well over 700 videos over the last 10 years, and I thought I would create an article here to discuss some of my ideas on this topic.

For instance, there's a big demand for education in the fields I teach -- so, I stick to education. Some other YouTubers in this niche are successful by mixing education & comedy. Other people even get their hands into the drama a bit, yet they're still successful, because people find that stuff interesting.

That's the first thing to understand. If you feel you have something to offer, you have half of the battle solved.

The other half of the equation is consistency.

Consistency -- Just how consistent do I have to be?

This is the part that pretty much deflates most people. I tell anyone, regardless of niche, that if they're serious about YouTube, they should produce at least 1 video per week and have no expectations for 1-2 years.

You might get lucky and knock it out of the park and end up with 100,000 subscribers your first year. But you might also end up with less than 1,000 subscribers after 52 videos. In the end, you can't be discouraged if you had no expectations in the first place.

Building a YouTube audience takes time. Unless you're one of the exceptions (I wasn't) and creates extremely engaging content, it's going to take years of effort.

As you can see, for years the channel was slow-going. On January 1st, 2014, I set out to create a video every day. I did so for 100 days straight. As you can see, it provided an initial bump right at the end of 2013, but it really leveled out for years.

I kept consistent though. And in 2017, things really started to take off. That's the takeaway -- you have to be willing to be consistent or you will definitely sell yourself short.

Oh, God, if the previous section didn't discourage you, this part probably will.

Let's take a look at my lifetime daily earnings:

Fortunately, I didn't at all rely on this income. At that time, I was creating UI/UX and Frontend development courses for companies like the Envato network TutsPlus, Pluralsight, etc..

Here's a year to year breakdown of the ad revenue:

Did I do anything special or different between 2017 and 2018? No -- Nothing that comes to mind. While I've always tried to improve how I teach, my production value, etc.. the formula has always remained the same.

The takeaway here is that again, don't have expectations initially, especially monetarily. The light at the end of the tunnel == if you keep consistent, keep striving for improving your videos in all aspects, some day you're going to explode and begin to make a real living.

When my channel started to finally take off near the end of 2017, I was approached by a Sponsor. I charged them $800 for a video where I discussed their product/service. I told them I would give them my honest opinion -- and I did. Since then, I've never taken a sponsorship with a company that I didn't personally believe in. I knew my subscribers would eat me alive, and I would feel horrible for promoting a product I didn't feel was worth it.

In 2020 and beyond, influencer marketing is going to grow. In contrast to traditional mediums like TV advertising, it allows companies to gain exposure to a highly targeted audience for a relative fraction of the cost.

Once I really began to grow in the last couple years, these companies contacted me. I didn't have to search them out.

But if I were starting a new YouTube channel that didn't satisfy the requirements YouTube put in place for monetization -- I would contact companies in my niche and request sponsorships so that I could at least make something. I wouldn't do this until I had at least several months of videos, though.

What matters the most? Subscribers, Views, Likes, etc..??

In the end, what matters the most are views. Views from real people. Engagement too (likes, dislikes, comments, click through rates, etc..).

Too many people get hooked up on subscriber count, like it's the most important metric. It's not. There are channels with over a million subscribers who make far less than me. Your subscriber count is really just vanity; social proof. That's why I laugh when I see people buying subscribers, or trading subscriptions to each other's YouTube channels. It's a waste of time.

YouTube doesn't pay you according to your subscriber count. They pay you based on your views. And they will give you views as long as your engagement is good.

So, really, what matters the most is the content. You may have heard it before: Content is king!. It's true because the content is what drives the views and the engagement.

Stick to a niche, damnit

I made a big, big mistake early on. I got my hands into so many different topics (UI/UX, identity design, print design, 3D design, game development, web design, etc.) and while it helped grow my subscribers, it hurt my views.

It hurt my views because the interests of my subscribers were spread out so far. So, when I uploaded a video that had to do with web design, the people that subscribed to me for the other topics wouldn't watch the video.

Recent story: A local friend told me they want to get into YouTube. I asked them, Nice, what about? They responded with, Well, just my family and my life in general -- and whatever else. That's when I had to give him the reality check, while it's possible to have a successful channel about such a broad topic, it's highly unlikely. You can do it, but don't have any expectations.

Is it possible to come up with THAT much content for THAT long?

Of course it is, I've done it along with countless others. It's not easy though, after 700+ videos, I do struggle at least once a week to come up with a topic.

I have a list in google docs with over 70 ideas that I've added to over the last couple years. Sometimes some topics require a lot of research and I don't have enough time, other times they might be too outside of my niche, so I don't always end up using them.

I also have a bunch of bookmarks of sites in the industry for potential ideas or inspiration for future video topics. Codepen, speckyboy, this site are all on there and more.

In the end, you need to think about what people are searching for or what might interest them.

If you're a coder and you want to teach, you could create a crash course on JavaScript. You could create a video that addresses a common error and how to fix it. If you're a comedian and love coding, maybe you can put a "meme" sort of video together about a common frustration (these types of videos are great with engagement and don't rely on search).

If you're a UI designer, maybe you can show people how to create an SVG line animation, or how to use MS Paint to create a UI -- I kid.. Wait, actually -- that could go viral. I'll save that for myself, ty.

There's really a million ideas in every niche, but you have to think in small bite sizes and create hyper-targeted videos for the most part. Your videos need to address something specific. People generally don't like watching people randomly design, or randomly code.

Let's say you made it. You're now making enough from YouTube and maybe Sponsorships to quit your job.

Wait, what? you're thinking?

At any point, YouTube could decide that you and the other creators in your niche won't receive as many views and you could see your earnings dry up in a matter of days. (It's happened recently in the child-based creators niche with COPPA).

For whatever reason, advertisers might not want to spend as much and there goes your earnings.

There's a lot of things that could happen, and that's why you need to look at YouTube as a supplementary source of income. You need to build an email list, have your own site, sell your own courses or products/services, and whatever else. 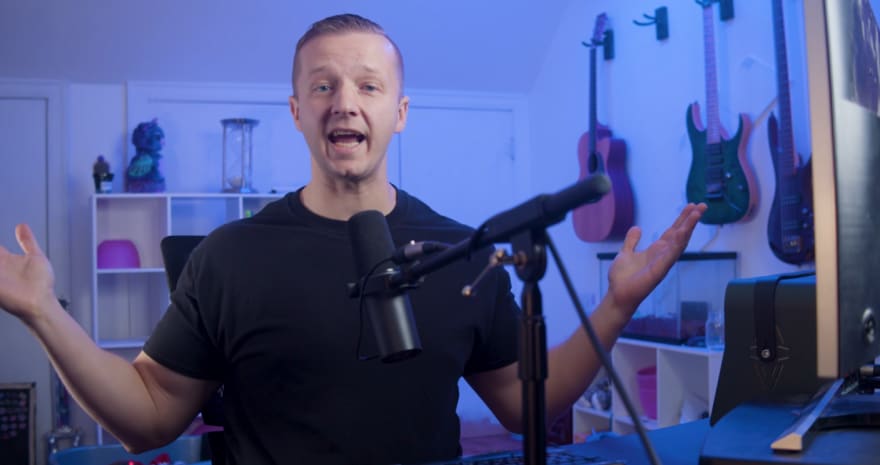 One way to guarantee people will leave your video quickly is to have crappy audio. Get a decent mic. I use a Shure SM7B (The same one Joe Rogan uses), but you can get a decent mic for a fraction of the cost.

In our niche (design / code), you will be screencasting. You don't need your face behind a camera. In fact, that annoys some people. Just make sure that your screencast footage is crisp and clear with a high enough quality.

If you are going to put your mug behind a camera, you'll need a few decent lights along with the understanding of how to light yourself. It will go along way with increasing your production value.

Here's some of my equipment that I use:

You can make it on YouTube, but it's not going to be easy. You need to have Forrest Gump Runner-level dedication. If you can stick it out, the results might be glorious. But then again, that's true for anything in life: Fitness, business, etc.

So, if you're brave enough to embark on the YouTube journey after reading this, go on young seedling, start uploading!

What can GraphQL do for your API?

Developing an Interactive Résumé with HTML and CSS

A Beginners Guide To DOM Manipulation

Trending on DEV
Charming the Python: File Handling
#python #beginners
Debugging Docker Containers
#docker #debugging #tutorial #webdev
Should I Quit My Job? Take This Quiz to--Just Kidding, You Should Quit
#career
Learn how to make a Triangle in CSS once and for all
#webdev #html #beginners #css
Personalize your Linux terminal prompt ✨
#linux #beginners
100+ Places to Find Freelance and Remote Web Developer Jobs
#career
Should you learn Git in a GUI or the command line?
#git #beginners
Learn from these Websites to Launch Your Remote Job Career
#career #productivity