Lombok is an amazing library that reduces boilerplate code in Java thanks to annotations processed at compile time. I use it heavily in my personal and professional projects.

I recently discovered a downside though: lombok generated methods are considered as "regular" code by the coverage libraries. If you have lots of them, the coverage reported by JaCoCo or SonarQube can thus be wa(aaaa)y lower than expected.

We write the following test, which is not very elegant but covers all the lines:

Using JaCoCo, the reported coverage is however as low as 33% ! 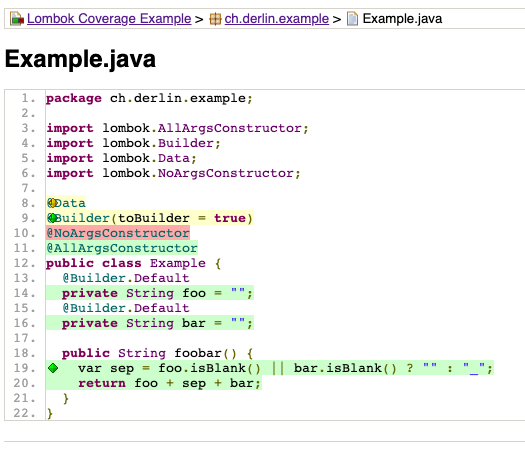 To fix this, we need a way to tell JaCoCo to ignore lombok generated code. This is possible by instructing lombok to annotate all the generated method with @lombok.generated, which JaCoCo will ignore automatically.

Create a lombok.config file with the following:

And put it either at the root of your repo, or in the src/ folder. The only requirement is that all code with lombok annotations is found below or alongside this file.

And there you have it !

OutSystems vs. Mendix: Clash Of The Low-Code Titans

Once suspended, derlin will not be able to comment or publish posts until their suspension is removed.

Once unsuspended, derlin will be able to comment and publish posts again.

Once unpublished, all posts by derlin will become hidden and only accessible to themselves.

If derlin is not suspended, they can still re-publish their posts from their dashboard.

Once unpublished, this post will become invisible to the public and only accessible to Lucy Linder.

Thanks for keeping DEV Community 👩‍💻👨‍💻 safe. Here is what you can do to flag derlin:

Unflagging derlin will restore default visibility to their posts.