The key to building Docker images quickly, across CI providers like Google Cloud Build, is to make use of the previous build's layer cache. There is the theory and best practice for creating a Dockerfile that takes advantage of layer caching by trying to get as many cache hits as possible during a build. But, in a CI environment, you need to have the layer cache available to the build for that work to pay off.

In this post, we are going to focus on how to build a Docker image as quickly as possible in Cloud Build by leveraging layer caching. We will benchmark build performance with caching using the docker executor, kaniko executor, and our own depot service.

Getting an image built inside of Cloud Build can be done with a single step inside a cloudbuild.yml file. Here is an example where we are building a Node application that has the following Dockerfile:

To build this image we add a cloudbuild.yml file to the root of the repository with the following contents:

This configuration is telling Cloud Build to build an image using the docker builder image with two different tags, one for the commit SHA and the other for latest. Then the images block tells the build to push those resulting images to artifact registry. Running the build we see the total build takes 1 minute and 40 seconds, with the image build portion taking ~78 seconds.

If you run the build a second time you will notice that the image build is again, approximately 78 seconds. Why? Because we aren't doing anything to make use of the previous builds cache. We can add that by updating our cloudbuild.yml file to the following:

This is the easiest way to leverage the build cache of a previous build in Cloud Build. Here we are pulling down the latest tag for the image we are building in the first step. We pull that tag down so that we can make use of it in the --cache-from flag in the second step. This is what allows us to utilize the build cache from the previous build because we tag all new images with the latest tag.

So, what are the results now? The first build took about 78 seconds to build the image and the second build takes ~38 seconds. A nice improvement, but if you look closely, something doesn't look right. 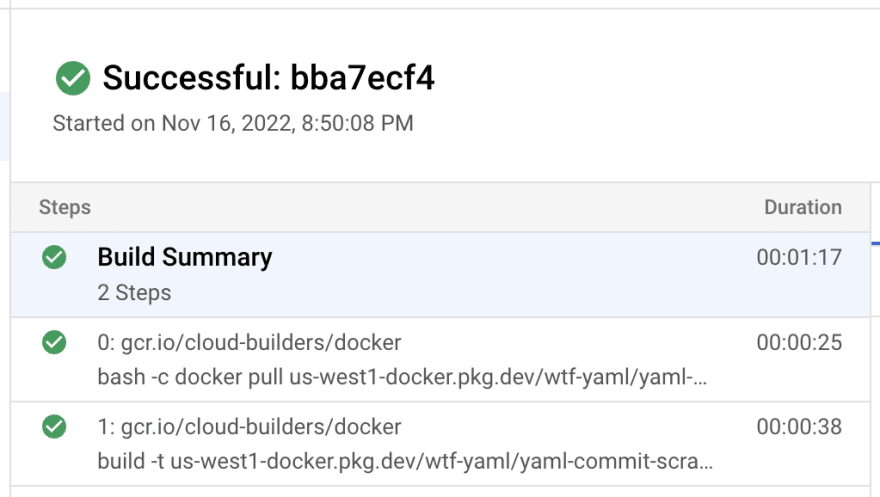 Did you spot it? We got the docker build portion down to 38 seconds, but the entire build still took ~78 seconds. Why is that? Well, it's because pulling the latest tag to use in the --cache-from takes time to transfer that image from the registry to your build so that it can be used for caching. In this case, that took 25 seconds and has negated any benefit we could have seen from using the layer cache in total build time.

We can actually change our cloudbuild.yml file to use kaniko instead of the docker builder image. With the Kaniko executor in Cloud Build, we can specify a --cache flag that allows us to store our Docker layer cache in Container Registry. Here is the updated cloudbuild.yml file:

If we run a build with this configuration, we see the following results:

The entire build took 2 minutes and 30 seconds, and the image build portion took 2 minutes and 19 seconds of that. That's not ideal, but maybe build performance will be better for the next build because we can make use of the layer cache via Kaniko. Let's run the build again and see what happens:

We've observed that using the Docker layer cache across builds speeds up build times significantly. But, as we saw, the current approach for doing that in Cloud Build can negate any performance gains because of network latency. The image build might take 38 seconds, but the entire build still takes a total of 78 seconds to complete because it takes another 25 seconds to pull down the latest tag to use for caching.

What if we could make use of the layer cache without the network penalty? That is where Depot comes in. Depot provides remote container builders on cloud VMs. They come with more resources, 4 CPUs and 8 GB memory, as well as a 50 GB persistent SSD cache. A large, fast, and persistent disk allows us to share layer cache across builds automatically, without spending any time transferring the cache for the build.

We can use Depot to build our image in Cloud Build by using the depot builder image. Here is the updated cloudbuild.yml file:

This configuration uses the depot builder image to build the image. The --project flag routes your build to your Depot project and the remote builders that back it, using the DEPOT_TOKEN environment variable to authenticate the build to your project. Note, the token used here is a project token that can be created under your project settings.

If we run our first build using this configuration, we see an output like the one seen below:

We can see that the first build is uncached and takes a total of 73 seconds to complete, with 64 seconds of that being the image build. Things are already faster when looking at total build time, than any of the other previous options. Let's run a second build that leverages the persistent SSD cache on the remote builders. We don't have to make any changes to leverage the layer cache, it's already on the remote builder.

The entire build took 28 seconds, and the image build portion was 15 seconds. Depot is over 2x faster at building Docker images inside of Google Cloud Build than any of the previous options we looked at.

In this post, we have seen the variety of different ways that you can build Docker images in Google Cloud Build. A fundamental component to making image builds fast is making use of the layer cache from previous builds.

Are you interested in trying Depot for your own projects? We offer a 14-day trial! Get started for free 🎉

Kubernetes: Whats, Whys, and Hows of Kubernetes with Demonstration

How to Design a Web Application Software Architecture

Once suspended, depot will not be able to comment or publish posts until their suspension is removed.

Once unsuspended, depot will be able to comment and publish posts again.

Once unpublished, all posts by depot will become hidden and only accessible to themselves.

If depot is not suspended, they can still re-publish their posts from their dashboard.

Once unpublished, this post will become invisible to the public and only accessible to Kyle Galbraith.

Thanks for keeping DEV Community 👩‍💻👨‍💻 safe. Here is what you can do to flag depot:

Unflagging depot will restore default visibility to their posts.