Hello friends, the second edition of my book "Full Stack Development with JHipster", co-authored with Sendil Kumar N, is published this week and I thought of dedicating it to all the Full Stack Developers out there.

In terms of web application development, the stack can be broadly classified into two areas—frontend and backend stack, also known as the client-side and server-side stack. The term frontend generally refers to the part of the code that is responsible for rendering the user interface, and the term backend refers to the part that is responsible for the business logic, database interactions, user authentication, server configuration, and so on. There is also the DevOps part of the application, which includes continuous integration, production deployment, and so on. A full-stack Java web application developer is expected to work on both frontend and backend technologies, ranging from writing HTML/JavaScript for the user interface to writing Java class files for business logic and SQL queries for database operations. They are also expected to work on DevOps, ranging from production deployments to setting up continuous integration and continuous delivery (CI/CD) as required.

With an ever-evolving software architecture landscape, the scope of technologies that a full stack web developer is expected to work with has increased dramatically. It is no longer enough that we can write HTML and JavaScript to build a user interface — we are expected to know client-side frameworks, such as Angular, React, and Vue.js. It is also not enough that we are proficient in enterprise Java and SQL — we are expected to know server-side frameworks, such as Spring, Hibernate, Play, and Quarkus.

The life of a full stack developer would be worthy of a whole book by itself, so let's leave that topic for another day. 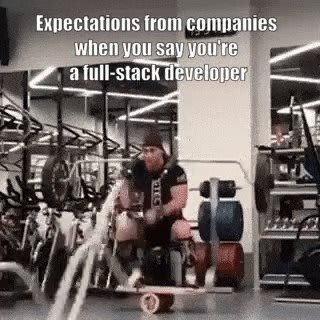 Instead, let's look at a user story from a full-stack Java web application and see what is involved.

Let's use an example of developing a user management module for a typical Java web application. Let's assume that you would be writing unit test cases for all of the code, and so we won't look at it in detail here:

As you can see, it is no easy task. The range of responsibilities spans from making stylesheet updates on the client-side to running database migration scripts on a virtual machine in the production cloud service. If you are not familiar enough with the setup, then this would be a herculean task, and you would soon be lost in the vast ocean of frameworks, technologies, and design patterns out there.

Full-stack development is not for the faint-hearted. It takes a lot of time and effort to keep yourself up to date with the various technologies and patterns in multiple disciplines of software development. The following are some of the common problems you might face as a full stack Java developer:

The most important thing of all is to make sure that all of these work well together when required. This task will need a lot of configuration, some glue code, and endless cups of coffee.

It's very easy to get lost here, and this is where technologies such as JHipster and Spring Boot step in to help. They help by providing the wiring between moving parts so that you only need to concentrate on writing business code. JHipster also helps by providing the abstractions to deploy and manage the application to various cloud providers.

A full-stack developer is one of the toughest roles in our industry these days and I think it is one that is under-appreciated a lot. If you are a full stack developer be proud as it takes some courage to be one. You may not be an expert in a single technology or framework but you are a magician of sorts. You can juggle between so many technologies and frameworks without breaking a sweat. You are the real 10x developer, what the heck, you are a 100x developer, not because you use specific keys on your keyboard more than others, its because your job used to be something that required at least four people to work together. You may not get enough credits, though you deserve it just for the effort that is required to keep up, you are awesome.

Though the satisfaction of being able to work on all aspects of application development is rewarding, It is still a shame that we are not getting the salary that is the sum paid to four people who were needed to do this work 😉

So if you are a proud full stack developer let me know in the comments and tell us how your day looks like.

If you liked this article you might like my book as well. You can get it from Packt and Amazon.

Know Not Only Your Weaknesses, But Strengths as Well

Most people want to develop self-awareness. Whether we are managers, entrepreneurs, or aspiring software engineers, the more knowledge we have of our strength and weaknesses, the easier life becomes.