This article was originally posted on Medium as an extension to my article series on NodeJS Event Loop on Medium:

In this article, I’m going to explain how NodeJS internally glue a bunch of C/C++ and JavaScript pieces all together to build an amazing server-side Javascript framework.

For you to clearly understand how it works, I have included few code snippets in this post from the NodeJS codebase. Please note that I have truncated certain parts of those for brevity and have added some comments and log lines myself. Also, I would like you to understand that NodeJS codebase is very active and is subject to frequent code refactoring. Therefore, these code snippets might be drastically different across revisions. However, the overall functionality will be almost similar. Although these snippets would be gone in future releases, understanding how they work right now could make it really easy for you to understand the entire NodeJS codebase.

In the Event Loop series, I explained to you how it works, different phases of it and the sequence. But the event loop is implemented in libuv and nowhere in its code is mentioned about process.nextTick. Now the weird question is….Where is process.nextTick callbacks are called? The only thing we know is that they are called at the start and between each phase of the event loop.

I presume you have a sound understanding of the different phases of the event loop, microtasks, process.nextTick and other terminology related to Node. If you haven’t I do appreciate if you can read the aforementioned Event Loop article series before reading this article as you might feel it difficult to follow some of the concepts mentioned here.

First of all, let’s see how process.nextTick is defined in JavaScript context so that we can call it. To come to that, let’s see how NodeJS starts up.

During the initialization of NodeJS runtime, an instance of V8 environment is created and the environment is started by calling Environment::Start method. In this method, SetupProcessObject is executed which makes some interesting C++ functions accessible from JavaScript.

I will explain how this SetupNextTick function comes into play in a while.

During the execution of startup() function, NodeJS requires the next tick module from internal/process/next_tick and executes its setup() export function.

This setup() function is exported from next_tick.js and is a reference to the function setupNextTick defined in the same file.

The golden point is….. You need to trigger **_tickCallback** JavaScript function somehow during two phases of the event loop in order to process the **nextTick** queue and the microtasks queue.

To do this, _tickCallback function should be passed somehow to C++ context.

Now if you remember I explain before, process._setupNextTick is actually a C++ function which is referred in JavaScript context upon the initialization of V8 environment. For clarity, I’ll just copy/paste the gist again (It’s time to scroll up if you don’t remember ;))

The equivalent C++ function to process._setupNextTick JS function is SetupNextTick which is defined in node.cc. 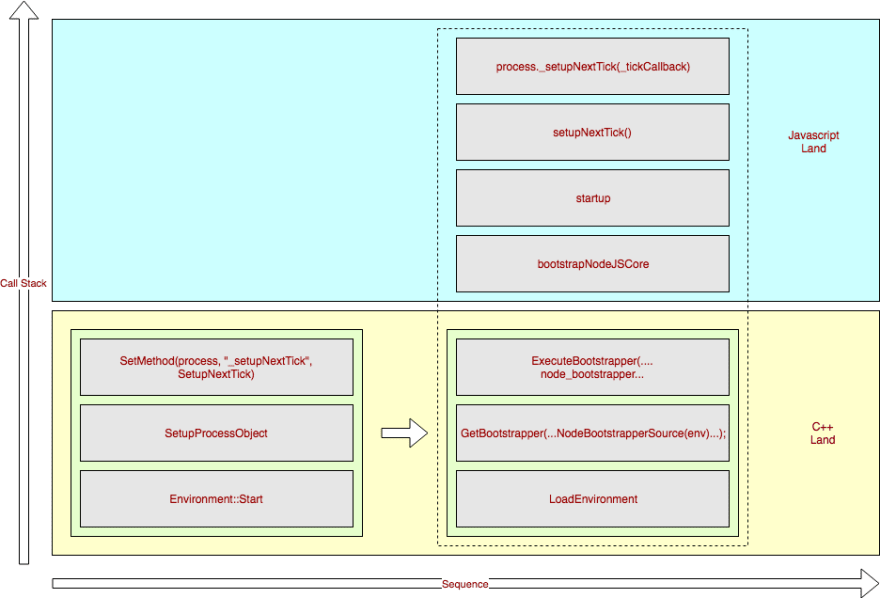 Now if you recall what I mentioned above….

The golden point is….. You need to trigger **_tickCallback** JavaScript function somehow during two phases of the event loop in order to process the **nextTick** queue and the microtasks queue.

Now we need to know where tick_callback_function is called in C++ context. Let’s go back to the event loop now.

In NodeJS, we write all our code in Javascript, which means all of our callbacks are JavaScript. So how are they triggered by C? The answer is, this binding glue is the C++ bindings for libuv. Those are the functions written in C++ who bridges C++ and JavaScript and invoke JavaScript functions when libuv asks them to. Let’s try to understand it in a clear way by an example.

When you are adding multiple timers using setTimeout, they all will be grouped together by their timeout value so that timers with the same timeout value will be in a single list. And Javascript will provide a callback function processTimers with each list to execute its callbacks. This callback function will be passed from JavaScript to C++ as OnTimeout in C++, and then C++ to libuv(C) as timer_cb attached to a handle which is invoked by libuv. Essentially, calling the timer_cb of a handle in libuv will trigger the execution of the multiple timers which were set at the same time with the same timeout value (I know you have questions now, but just keep them in mind for my next post on NodeJS timers in detail ;))

How a processTimers() JavaScript function is triggered from libuv

When OnTimeout function in C++ is called, NodeJS will cross the C++ boundary all the way to JavaScript and will execute the given JavaScript callback. When it crosses the C++/JS Boundary, an interesting function is called named MakeCallback.

Now if you search for MakeCallback, you will find multiple overloaded MakeCallback functions in node.cc and async_wrap.cc with different signatures:

At the time of this writing:

Each of them is written for very distinct purpose but if you look closely, you’ll see that they all eventually calls the InternalMakeCallback function defined in node.cc.

This **callback** is the almighty who processes a single phase of the event loop.

Then comes the most important part. You’ll see that after calling the provided callback, scope.Close() function is called.

Let’s look at the definition of scope.Close() function defined in node.cc.

Within this function, it executes the tick_callback_function in V8 environment.

Do you remember what tick_callback_function is? It’s the same _tickCallback JavaScript function which is referred in the C++ context which indicates that every time InternalMakeCallback is called from C++ _tickCallback function is called at the end. Therefore, at the end of each phase, nextTick queue and the microtask queue are processed.

But, If you read my Event Loop article series or if you have personally experienced process.nextTick callbacks and the microtasks are run even before the timers phase start. How is this happen?

I suppose you now know how the mysterious process.nextTick works. If you have any questions regarding anything I’ve mentioned or if you like to add something please feel free to comment. Thanks.

How to use custom fonts in React-Native.