Redux took the front-end world by storm, elegantly solving the problem of synchronous state changes. Yet it left developers mostly on their own when it came to async.

Today I'll discuss two libraries: a Redux middleware called Redux Observable, and a non-Redux library called polyrhythm, and compare and explain how they both fill that gap, and why you might choose one or the other.

In the spirit of transparency, I am the author of polyrhythm, but I freely cite Redux Observable as an influence and wouldn't discourage you from choosing it- but I would welcome you to give polyrhythm, and its many examples a look!

The Need For Asynchrony

Consider how we work with money in the real world. There are events (transactions) that result in instantaneous settlement, and then there are those that take time. On the one hand, if you pay with a $20 bill for a latte that costs $3.60, you get your $16.40 change instantanteously. Synchronously. On the other hand, when you initiate a wire transfer, it will settle, but some time later that business day or another day. Asynchronously, like a Promise.

The core of the async problem is that JavaScript, like most current languages, is based entirely on synchronous data. You can't use if-else with an asynchronous value- even the language's control structures don't work on async data. The Promise is only officially 5 years old, and the language had 15 years of evolution and use before. So basically, asynchrony is still an afterthought, resulting in a hodgepodge of solutions.

Some folks believe that Promises are enough if you only want a single value (see this thread). But I think a single value has never been enough for the Web. A value from a remote server is stale right away—unless it includes all future updates in the form of a stream. And if you want single-value delivery to have nice things like progress notifications, or start/(end|error) events, you've left the single-value paradigm.

The bottom line is that the fundamental data type of a stream, defined in the TC39 Observable proposal, and implemented primarily by RxJS, is a useful everyday value type in web development.

Since Redux Observable and polyrhythm both agree with that premise, let's use an example to compare!

Example: From a Job, A Stream of Payments

Our example, is a happy one, celebrating a recent event in my life. In it, you get a job (by dispatching a job/start action), and thus can happily consume a stream of job/paycheck actions in return!

For an Observable of paychecks (let's use 30ms as a stand-in for 30 days), we define a stream called payActions.

We can now look at how each of these frameworks would dispatch events from payActions in response to a job/start action. So let's start!

First we import some operators, and define an epic. From the R/O docs:

The salary epic takes as input all of the actions that the store ever sees (action$), filters them down to those with type job/start using ofType, and then produces (and returns) a stream that automatically dispatches job/paycheck events every 30 units mergeMap. This resulting stream is automatically sent back (dispatch-ed) through the store. (mergeMap would allow you to have multiple jobs at once, but we'll discuss that further when we talk about Concurrency.)

The setup involves modifying your Redux store to include the Redux Observable middleware, and bringing our epic into the middleware:

Now that we've identified the parts of that solution, let's see how those parts correspond to those in polyrhythm.

Polyrhythm looks a lot like event handlers from the JQuery days. It lets you do anything in handler functions, not just dispatch events. So first we set up the event bus to send every event through the store.

The imports we use are listen and trigger— listen takes the event pattern to match as its 1st argument, and trigger takes the event to put back on the bus. The setup we need is to send every event (or some subset) into the Redux store, like this:

At this point, we've subscribed the store to all actions/events, because the criteria true matches all events. Now, trigger(event), or trigger(type, payload) will send an event through the Redux store. Thus all we need to do is call trigger for every payAction upon a job/start event.

Now the shape of the code actually follows its intent, for those familiar with RxJS' subscribe:

Listen for job/start events, on each one, trigger a paycheck for every pay action.

But can we get that one call to subscribe out of the code so it's easier to read and explain?

I'm always compelled to simplify code. My goal is that each constituent part intentionally serves a single purpose.

But what if the Observable you're turning into actions isn't written for Redux?

Polyrhythm V.2 - Use a non-Redux Observable

Consider how the payActions Observable is coupled to the names of the dispatched actions. Polyrhythm can decouple the payloads from the types by letting you return Observables of raw values, and assigning types separately.

First, let's suppose we have a Redux-unaware Observable paycheckValues, which incorporates only pay-related values-over-time like this:

We could use the 3rd argument to the listen function to both subscribe to these values, and trigger them as job/paycheck events!

How cool is that! We get to completely drop the tap operator, the pipe, and just rely on what's in polyrhythm and our value-only Observables. Our code now reads:

When you get a job/start event, take the paycheckValues stream and trigger each as job/paycheck.

Now let's see how polyrhythm takes one of RxJS strength - timing control - and allows you to make it even more configurable.

One of the big questions of async is - when an async operation is ongoing, do you start a new one, enqueue it, or what? In our job example - can you work multiple jobs at once?

Recall, that with Redux Observable, we use standard RxJS operators in order to control how Observables are combined. A couple of issues with this are:

For example, the Redux Observable diff that takes this from a multi-job example to a single-job-at-a-time looks like this:

If you know RxJS you know why this works - but how confusing is it to read?! Not only that, must the concurrency behavior be baked-in to the Observable or can it be decoupled from it for easier testability/changeability?

Polyrhythm's 3rd argument has just a spot for controlling concurrency:

Now we are really close the business language:

When you get a job/start event, trigger a paycheck with the specified values (as job/paycheck), and end the previous job's paycheck stream, replacing it with the new paycheck stream!

A DSL for concurrency

In my experience, async concurrency matters a great deal to UX! Downloaders should be serial, autocompletes should replace old results, etc. But these behaviors are often not specified along with the requirements of a feature. To help you, the developer, tease out the desired behavior when you get a new feature request- this graphic can help you prompt "Which mode is this feature supposed to operate in?" (My PM/Designer Jase learned to tolerate, if not love getting questions like these from me :) ) 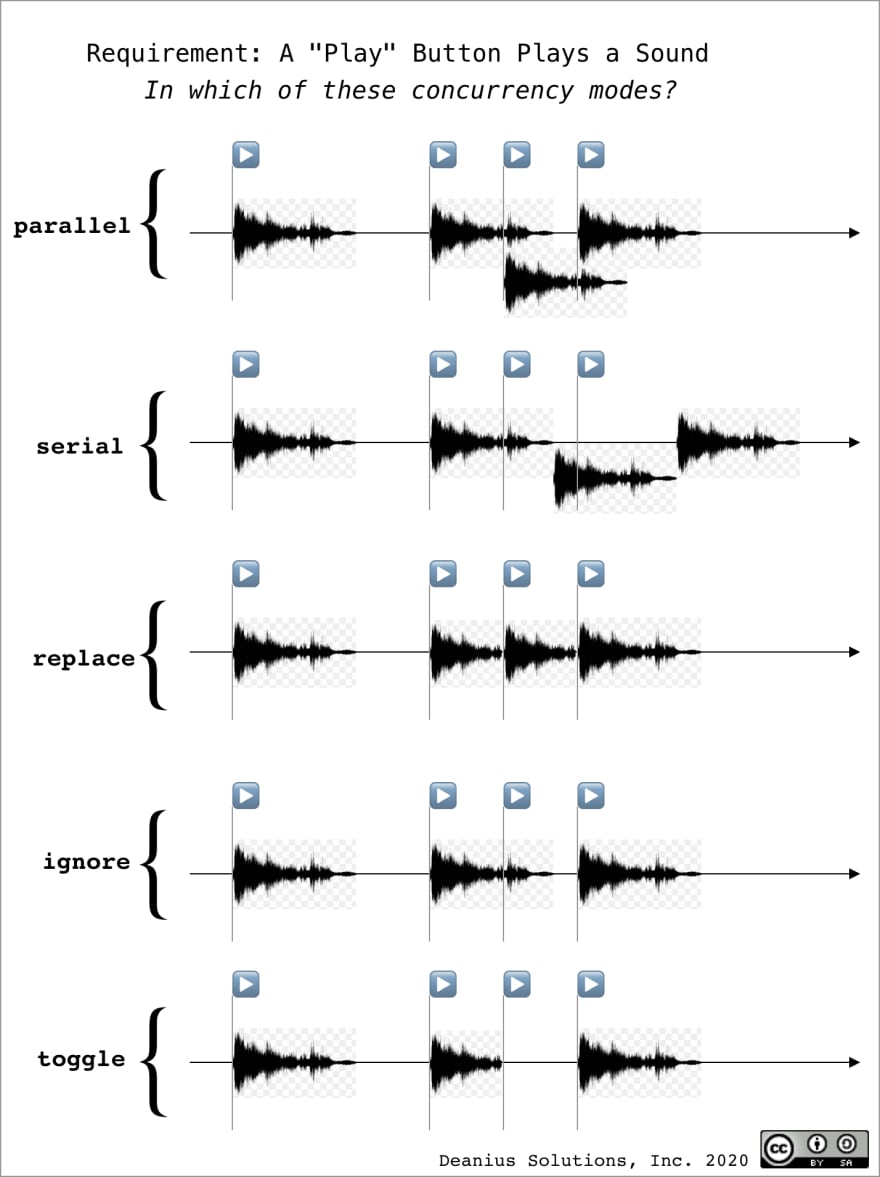 These are built upon the RxJS operators, but named according to what they do, and including a mode 'toggle' for completeness:

Basically, whenever I could remove boilerplate, decouple, or otherwise improve DX (Developer Experience), I tried to do so.

Respect to Prior Art

One brilliant aspect about Redux Observable is its insight that each new piece of functionality can be implemented in a function which creates a stream of new actions/events in response to existing events, showing such a safe, and pure-functional way to grow an app. Polyrhythm, while essentially the same architecture, but outside of Redux, exists to get all those benefits, yet still have code that is as readable, and jargon-free as possible.

I hope you'll enjoy giving polyrhythm a try. Check out its repository. It's more than a proof of concept - used in production and highly tested - but use whichever one helps.

Thanks to the Redux Observable team (special mention to Jay Phelps) for inspiration and a hugely helpful Gitter channel.