Once upon a time, a junior developer asked himself: "What is this dependency injection thing that all the seniors are talking about?" He know how to use it, but he was not familiar with the principles behind it, nor he fully understood why all of them are using it.

Once, I've been this developer, but now I'm one of the seniors who believe that dependency injection (DI) is a very important and useful concept we all should be familiar with. Then I sometimes thought how hard could it be to create a DI framework myself? How hard could it be to create some instances of classes which are registered first? It's not magic, neither is it hard. I'd like to show you now how to do it - and maybe it will help you understand it better.

Obviously, we do not implement DI as an end in itself. There is a problem we can solve with DI and it's solution is called Dependency Inversion Principle (the D of SOLID, DIP abbreviated).

The problem here is the creation dependency (the new keyword) to PeopleRepository.

We don't want this due to various reasons. First of all, it's bad for code quality, as the quality attributes testability and changeability cannot be met.

Furthermore, we cannot provide a mock instance to the PeopleService in order to write a unit test for it. The solution to this problem is to pull the creation dependency (the new) up to the consumer of the PeopleService. 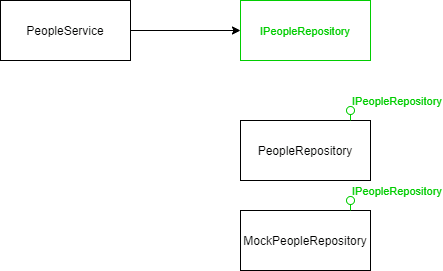 The dependency is now inversed, it's the responsibility of whoever wants to use the PeopleService to pass an instance of IPeopleRepository

It's now his responsibility to supply a correct instance of IPeopleRepository to the PeopleService.

As you can infer from the naming, we'll use an interface type here as dependency, in order to allow also supplying other implementations (e.g. for testing) to PeopleService to rely on. It is also more clear which other classes are required for the PeopleService to work correctly.

Imagine you apply the Dependency Inversion Principle everywhere across your app. At some point, all the instances of your classes have to be instantiated and passed to the dependent classes. 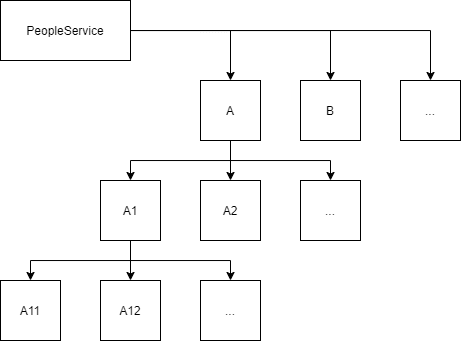 You need A and B to create a PeopleService, but in order to create A you need A1 and A2, and so on. As you can see in the above graphic, a dependency tree arises. Therefore, you have to start at the bottom where no dependencies are required (A11 and A12 here) and work your way up, until you got a PeopleService.

If something is added, removed or moved around inside this tree, you have to adjust it yourself. Especially for large-scale applications with hundreds of classes this soon gets impractical and unmaintainable (again, a quality attribute).

This is where dependency injection comes to the rescue. It's a technique which creates these instances for you and copes with all it's dependencies. The only thing you'd like to do is to have a small library which you can call: I'd like to have an instance of PeopleService, could you give me some?

Still assuming we use interfaces as constructor parameters (to be more flexible, you remember) we have to tell the DI framework which concrete implementations will be behind them. We have to register in the first place which implementation should be used for which interface, because there can be different implementations for different scenarios.

This will result in a table-like structure with a mapping from the interface-type to the implementation-type.

There are two different use-cases for a DI framework to cover:

I'll call my dependency injection framework ServiceLibrary. Only a single class will be used, since it does not get too much code. In consequence all the code snippets below reside in the ServiceLibrary class.

We'll start off with the easy part. As you can see below, the basic implementation is very simple.

Of course additional checks can be added to this snippet, for example:

When you'd like to retrieve an instance of a specific interface type, a lookup based on the _mappings has to be made. Depending on the concrete implementation type, all the dependencies for it also have to be evaluated and built. The above explanation is summarized in the following graphic:

How the service resolve works with interfaces and mappings

This is possible by using reflection, since all dependencies are listed inside the constructor and C# allows us to scan the constructor definition of any type. How this works in code is shown below.

The below snippet shows how the creation of the instances is done. It's implemented in a recursive manner because of the tree-structure which may result depending on which types you register upfront.

I left out some null-handling and edge-cases here, but basically that's it. We can now add an generic method to make the library more easy to use:

The implementation is now done, it's time to use it. We'll use the generic methods we created, since this is easier in my opinion. We just have to register all our interface-implementation type mappings first, and afterwards we are able to resolve an interface from it.

I haven't thought implementing a fully functional DI framework would be so straightforward upfront. However the more I thought about it, the easier it got. Nevertheless there are more use-cases which can be covered with DI, for example service lifetime management (singletons) just to name one.

I hope the concept of dependency injection is clear to you now. Feel free to look up the final code on GitHub as I worked a little bit on it for improvements and also tested it for the various use-cases.

Stubs vs Mocks in JS

Advanced Git Concepts You Should Know