AI has changed our world, intelligent systems are part of our everyday life, and they are disrupting industries in all sectors.

Nowadays, cars can see how busy a crossroad is, it’s possible to have pleasant conversations with imaginary philosophers, or we can simply have fun watching AIs destroying our favourite pro gamers. Until we have enough data to train models, the only limit is imagination.

In very broad terms, the data we use to train Deep Learning models belongs to two main domains:

In applied AI, Deep Learning models work very well with Euclidean data, but they struggle when dealing with non-Euclidean data. This is a huge problem because it's common to find data of this nature in all the scientific fields!

Why is geometry so important?

Since the Greeks era, Euclidean Geometry has been the only discipline for studying geometric properties. Even now, Euclidean Geometry is a powerful tool to describe many of the phenomena around us. As we saw before, it follows simple principles and is straightforward to understand: e.g. the distance between 2 points is a straight line, or all the right angles are congruent.

However, during the 19th century, many mathematicians derived alternative geometries by changing Euclid's postulates. They also realized that these new geometries were very good at explaining how objects interact in different spaces. Examples include the hyperbolic geometry of Lobachevsky or the Elliptic geometry of Riemann.

Unfortunately, all these different geometries diverged in multiple independent fields. A legit question at the time was: which is the True One?

Luckily in 1872, professor Felix Klein solved this intricate puzzle with his work called Erlangen Program. He proposed a framework to unify all the geometries by using the concepts of Invariance and Symmetry. 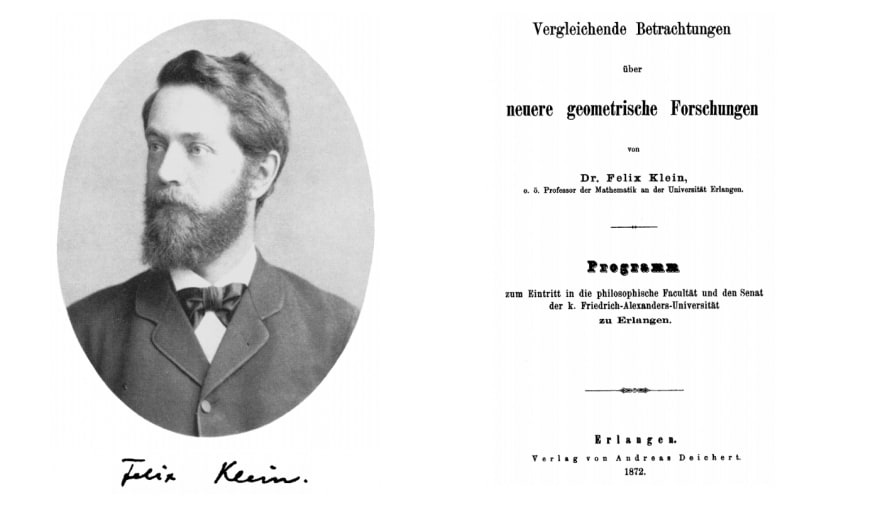 This idea led to a blueprint for defining a geometry by just specifying the domain where the data lives and what symmetries that data must respect.

The Erlangen Program had a significant influence on all the scientific fields, particularly in Physics, Chemistry and Math.

Deep Learning researchers are exceptional. Every day more than 100 ML articles are published on Arxiv.&text=That%20is%20about%2033%2C000%20papers%20per%20year.)! We are flooded with new models that promise to solve problems better than the others, but we don't have unifying rules to define AI architectures able to generalize their properties on all the possible data domains. 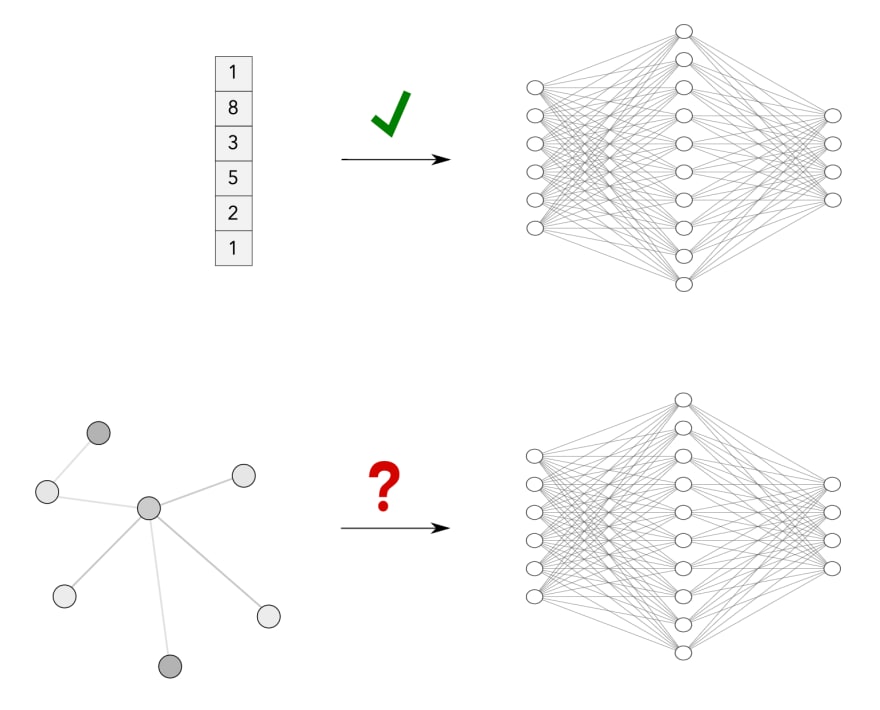 Convolutional Neural Networks (CNNs) are one of the most important algorithms in Machine Learning. CNNs can acquire high level information from images, videos or other visual inputs. For this reason they have been widely used to solve Computer Vision problems.

The term Convolution refers to a very simple operation: slide a little matrix (usually called filter) over an image and perform an element-wise multiplication followed by a sum to produce another matrix (see gif below). With this operation is possible to extract low level features from the input image like edges, shapes or bright spots.

Convolutions work because we represent images using a 2-D data structure. In this way it’s possible to share the network weights using convolutional filters, and extract information regardless of shifts or distortions of the input images (the same filter is applied through all the image). This has been the first example of problem simplification by using the geometry of the input data.

How can we formalize and extend this idea for other domains? Maybe applying geometric principles can help us as it happened in the past.

Why is learning on non-Euclidean data complicated?

Unfortunately, non-Euclidean data suffers from dimensionality curse! To explain it better, let's consider one of the main ML applications: Supervised Learning. Its primary goal is to learn to solve a task by approximating a function using training data. (Functions are the result of DNNs training, we'll use the word function in the following section)

Thanks to the universal approximation theorem, we know that we can use even a simple Neural Network to reproduce any continuous function (to any desired accuracy).

Neural Networks are universal approximators: with just one hidden layer, they can represent combinations of step functions, allowing to approximate any continuous function with arbitrary precision. [Source]

Unfortunately, things get complicated in high dimensions: we need an exponential number of samples to approximate even the most straightforward multidimensional function.

Approximation of a continuous function in multiple dimensions. [source]

A common fix for this issue is to project high dimensional data to a low dimensional space (for example reducing dimension using the PCA algorithm) However, this is not always possible because we may discard important information.

With PCA it is possible to reduce dimensions, but is it always what we want? [source]

To overcome this problem, we can use the geometric structure of input data. This structure is formally called Geometric prior and it is useful to formalize how we should process the input data.

For example, considering an image as a 2-D structure instead that a d-dimensional vector of pixels is a Geometric prior. Priors are important because by using them, it's possible to restrict the number of functions that we can fit with the input data and make the high-dimensional problem tractable.

For example by considering geometric priors, it is possible to identify functions that: 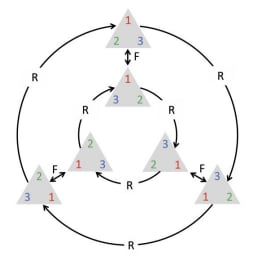 Rotation is a function that respects Symmetry in the equilateral triangles domain. [source] 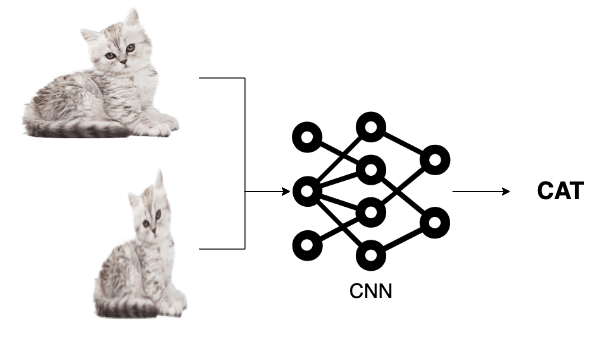 CNNs are robust to data deformation.

These two principles are not theoretical definitions but they are derived from the most successful Deep Learning architecture (like CNNs, Deep Set and Transformers).

The Geometric Deep Learning priors give us the blueprint to define Deep Learning architectures that can learn from any data. If the class of functions we define respect these properties we can tackle any data domain.

Graphs are the most flexible data representation. Objects in the real world usually have relationships or connections with other objects, representing them as graphs is the most straightforward approach.

Graph representation of the Serotonin molecule ( the happiest 🥳 ). [source]

We can see graphs like a collection of entities (N odes ) and the relationships between them ( Edges ). If there is a directional relationship between nodes the graph is called Directed , otherwise is called Undirected. 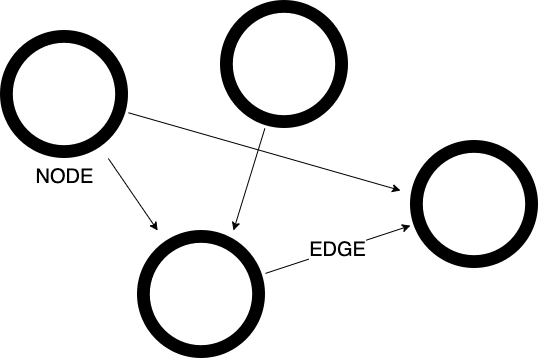 Mathematically we can define a graph with: $$G = (V, E)$$ Where V is the set of nodes, and E are the edges between them.

To simplify the notation, a graph can be also represented with an adjacency matrix (A ), the elements of the matrix indicate whether pairs of nodes are adjacent or not in the graph. 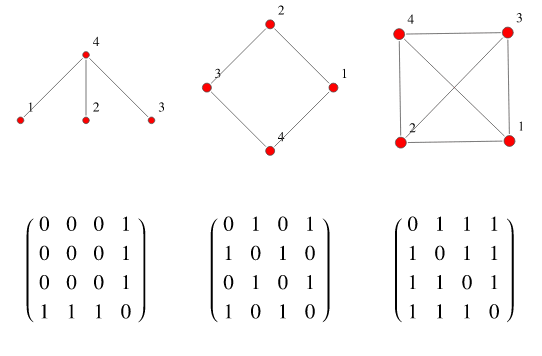 3 graphs and their adjacency matrix. [source]

However, by doing this we are specifying a node ordering! This can cause a lot of problems because we need to process graph data independently of isomorphism. For example the following graphs are the same but they are arranged differently:

Example of permutation that changes the second row with the third.

Given these definitions we can identify two main properties our function must respect:

These two properties are directly correlated to the first Geometric Prior defined above. As we discussed before, we solved a similar problem in Convolutional Neural Networks (it doesn't matter if pixels are translated) by using Convolutions on pixels neighbours (more formally: using local equivariant processing layers).

It turned out that is possible to build the same permutation Invariant and Equivariant layers in GNNs considering node’s neighbourhoods! Convolutions at the end are multiplications followed by a sum, we can define similar operations introducing a function able to process groups of nodes neighbours.

Let’s visualize how these mathematical definitions translate in graph processing. By considering the local neighbourhood of the node ( x_b ) is possible to create an hidden representation ( h_b ) using the aggregation function ( g(x_b, XN_b) ).

Deep Graph Neural Networks are built by stacking multiple of these layers! 🥳

Using this blueprint is possible to train GNNs able to solve the following tasks:

Defining how we compute the latent representations, using the aggregation function ( g ) (aka the hidden layers) we can have different flavours of GNNs:

But wait! ... This is only an introduction on GNNs. We will go in more detail in one of the following articles! Don't forget to check our blog regularly 🥳

The main takeaway here can be summarized with this quote (which I couldn't find the original author):

Data has shape, and shape has a meaning

In traditional ML shape is usually lost in data representation, Geometric Deep learning tells us that we can leverage the power of DL models by considering the geometrical properties of the input data domain.

In this small article we saw that it is possible to generalize modern Deep Learning architectures to learn in all possible data domains by considering the underlying data Geometric Structure.

We saw how Geometric Deep Learning can help formalize the properties our Neural Network must follow in order to exploit the geometry of input data.

A big thanks to professor Michael M. Bronstein and his team.

Why AWS Is Beneficial To Your Business

How to get a High paying MERN Job

get in touch
Song of the Machines (1): Sampling musical sections Weather Nowcasting - Model compression 🍔 Burgers & Drinks - Get to know Dataroots!