I wanted to share a few GitHub workflows I use for NPM projects, and I want to make it clear from the start that this are not the best workflows (and if you have suggestions are more than welcome), but they work very well for me.

Note
I'm going to assume that you already know a few concepts, like creating a Pull Request, or a Release version in GitHub.

What are GitHub Actions?

If you landed here but not sure what GitHub Actions are, in a few words, it’s a simple way to create your CI/CD workflow, that allows you to run specific workflows, like to run tests, linting, etc… when some specific events are triggered, like creating a Pull Request or merging a branch into another.
This is very similar to other popular solution for CI/CD like JenkinsCI, CircleCI, TravisCI, etc… But instead of using an external agent, everything is right in GitHub, where you code lives!

These workflows will work for an NPM package, and will perform the following events:

When we create a PR, or we merge into the main branch, we want to do a few things:

When I think my code is good to go, as it’s tested and code is properly formatted, I use GitHub releases to publish the package to the NPM repository.
This is helpful because we define what changes on every release, and we have a proper version history on GitHub.
When the release is done, a workflow will be triggered to perform the following actions:

So now that we have a plan, let’s see how this is translated into code.

To enable GitHub Actions, you will need to create a .github folder in your root directory.
In this directory I also normally add the CODEOWNERS file and a PR template.
In here you will have to create a workflows subfolder, and then create the various workflows you want to create, which they will be YAML files.
The naming of folders is important, but not how you call the configuration files, as long they are all .yml.
In my case I’ll have something like this:

Where the workflows will be the following:

First thing to add, is the name, which will be shown in the actions page:

Now we need to define when this workflow will be triggered:

In this case we want to intercept when a user pushes code into the main branch, of course you can add as many branches you want, but in our case we just want to listen for one.

Now that we gave a name and when to run a job, we need to define the job itself:

The code above will do the following:

Once you glue all the above together, you will have a file like this:

When you create a PR, you want to execute all the above instructions, the only difference between the main.yml and pr.yml file, is when the event is triggered, so our only changes in the code is the name and the on event:

I separate the two workflows mostly to have a clear naming when executing the workflows, and sometimes I add some differences on the jobs itself, but if you want, you can keep everything in one file, and add the events trigger in the same file.

Before we go to the next step, we need to save our NPM Token as a secret in GitHub, so we can use later when we need to deploy it.

Where is the NPM Token?

Well, the first question you should ask is: “Do I have a NPM account?”.
If no, go create one and come back here once done.
Once you have an account, you simply need to run npm login, enter your authentication credentials, and once logged in, the token will be available in your home folder (on Mac OS/Linux), and you will see a file called .npmrc, which it will contain something like this:

Add it as a secret

You can add secrets in multiple places, either on the repository itself, under Settings -> Security -> Secrets -> Actions, or you can add it to an organisation level if you have one, or you can save it as environment secret, and the only difference is where your secret is available. 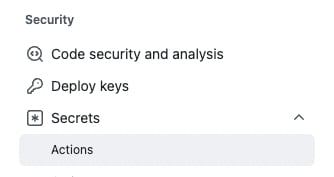 To keep it simple we’ll use the repository settings and use a Repository Secrets, but just know that you have options.

Once in the Secrets/Actions section, just click New repository secret, give it a name of NPM_TOKEN (or whatever it’s clear for you) and paste the token in it, and that’s it!

Now, the release workflow will be triggered when you create a new release version, and essentially what you want to do is the following:

The name and event will be the following:

So it will be run only once, when you create the release.

And the job will be the following:

Again, you want to be sure that you just use one version of Node, if we used a matrix as before, the action will try to publish a package for each version, which will succeed once, and fail the others.
With this code:

We tell to the action to use the token we stored in the secrets to authenticate, and our project is publicly accessible on npmjs.org repository by default.

We are all set!

Now you just need to push the workflows to your repository, and you are ready to go!
If everything goes to plan, you might see something like this
every time you have a successful release:

After I wrote this post I found out a slightly simpler way, straight from the official GitHub documentation, to publish packages that doesn't rely on an github action maintained by a third party, but essentially what it changed on the release.yml file is the following changes at the very end:

You need the flag npm publish --access public only if your package is scoped, otherwise it's not needed.

Once suspended, darkmavis1980 will not be able to comment or publish posts until their suspension is removed.

Once unsuspended, darkmavis1980 will be able to comment and publish posts again.

Once unpublished, all posts by darkmavis1980 will become hidden and only accessible to themselves.

If darkmavis1980 is not suspended, they can still re-publish their posts from their dashboard.

Once unpublished, this post will become invisible to the public and only accessible to Alessio Michelini.

Thanks for keeping DEV Community 👩‍💻👨‍💻 safe. Here is what you can do to flag darkmavis1980:

Unflagging darkmavis1980 will restore default visibility to their posts.