Is it a recipe? Sure. Is it advice on how to NOT make spaghetti? Also, yes. Does the article belong into Software development category? Of course, what is wrong with you? Are you interested? Great, then read more.

Okay, now it is time to explain what the hell am I talking about. Onion architecture is an approach to design layers of an application. Spaghetti or also the spaghetti code is the code, that is harshly separable, tangled and passes through multiple layers of an application. Such code is hard to maintain and hard to extend with any new features. So, Onion architecture is some kind of recipe telling you how to NOT make spaghetti.

As we know, it is simple to detach layers from an onion as well as attach them back again Alright, I guess nobody is attaching onion layers back to an onion, but it can work well as an example for our imagination. Architecture of an onion consist of core and layers. What should be the core in a software application?

Should it be a Database? Let's think about it. In a database, we can find information. What information about an onion we know? Onion can have a different colour, kind, taste or look. If information can have different values, they are variable. If something is variable, we can't rely on it. We don't have a solid core. So, the database cannot be a core either.

What or who is forming software applications? Developer? I don't think so. Simply said, the developer is translating tasks from human language to the language of the computer. So, the software applications are shaped from tasks by humans? Yes! And what are those tasks? Tasks are a list of criteria that the application should do. In software engineering, we have a name for one criterium on the list and it is the Business rule. So, the result of our brainstorm is:

Core of application is defined by tasks or Bussiness rules, which application should fulfil. 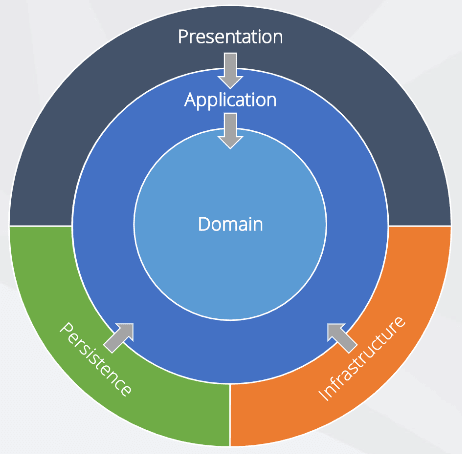 In onion architecture, core consists of two layers; The Domain layer and its wrapper, the Application layer.

How can we even implement "Save customer" task without a possibility of invoking methods of class in Persistence layer? Persistence layer in Onion architecture can be pictured as a Plugin for the Application layer. What do we need to plug in the plugin? Interface. Where will be an Interface? Well, in the core of the application. We will hold our interface in the Application layer and its concrete implementation will be implemented in the layer of the plugin, in our case, in the Persistence layer. This approach is called Dependency inversion principle. By implementing such an approach, we are achieving database technology independence. Database becomes an implementation detail and our core is completely separated from possible external influences caused by the database.

By using Onion architecture, we can reach the separation of vital rules from the outer world's technologies. If we don't tangle into our business rules outer technologies, we can manage the change of technologies more easily. Architecture brings easier use of modern development approaches like Domain-Driven Design and Test-Driven Development.

Clean Architecture for frontend in Action

40 maps that explain the internet