In this blog post, I explain when you should avoid Array.prototype.includes() and what you can use instead.

🚀 Not rocket science, or is it?

I ran into a performance issue on a recent project. After some debugging, I came across the following: There was an Array with a large amount of data. To check if a certain value is included Array.prototype.includes() was used. All this is not rocket science - or is it?

Let's start with a simple measurement. An array with a million entries and we check if certain values are included in the array.

The value 1000000 is not included in the array - the runtime is already 1 second. Optimizing this is probably still considered micro-optimization. If you use Array.prototype.filter() in combination with Array.prototype.includes() for large data sets, the snail will overtake you!

I found the following article that explains the Big O notation well: 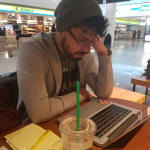 🐇 Almost always as fast as a rabbit

Let's take a look at Set.prototype.has() and compare the performance with Array.prototype.includes().

It makes no sense to replace Array.prototype.includes() with Set.prototype.has() everywhere, because it is not always faster. It's important to use functions with loops carefully. 😉

I performed a few benchmarks for this purpose, which you can see in the following table:

Deploying a Telegram Bot to AWS ECS with AWS Copilot. [Step by step] for absolut beginners.