The code for this tutorial can be found here

In this tutorial you'll learn how to build full stack dapps on Arweave with Smarweave, Warp, and Next.js.

The application we'll be building is a full stack blog, meaning that you will have an open, public, and composable back end that can be transferred and reused anywhere (not only in this app).

Unlike most blockchain applications working with large or arbitrary amounts of data, Smartweave enables all of the state for this app to be stored directly on-chain.

I think this is a good example as it's not too basic as to be boring, but not too complex as to be confusing. It shows how to do most of the basic things you'll need and want to understand in order to build more complex and sophisticated applications going forward.

Arweave is a web3 protocol that allows developers to permanently store files like images, videos, and pdfs as well as single page web applications.

Arweave introduced the idea of the permaweb - a permanent, global, community-owned web that anyone can contribute to or get paid to maintain.

When you publish a Smartweave contract, the program’s source code and its initial state is stored in an Arweave transaction.

When a user writes an update to a SmartWeave program, they write their inputs as a new Arweave transaction.

To calculate the state of the contract, a SmartWeave client uses the contract source code to execute the history of inputs sequentially. Invalid transactions are ignored.

In doing so, SmartWeave pushes the responsibility of validating transactions onto the users.

Warp (https://warp.cc/) is a protocol built on top of Arweave meant to facilitate a better DX/UX for Smartweave application development.

Now that we know a little bit about the underlying technology, let's start building.

To be successful in this tutorial, you should have Node.js 16.17.0 or greater installed on your machine.

I recommend using either nvm or fnm to manage Node.js versions.

Creating and configuring the project

To get started, let's first create the Next.js application, configure it, and install the dependencies.

Change into the new directory and install the following dependencies:

Then update next.config.js to use ES Modules to export the nextConfig:

This will enable the Next.js app to use ES Modules.

Next, add the following to the .gitignore file:

Never push wallet information to any public place like GitHub. In this tutorial we'll only be working with testnet, but we'll have the code available for you to push to mainnet. Just in case, we're adding wallet.json to .gitignore.

Next, let's create and test out the smart contracts.

1. An initial state for the application is defined as a JSON object.

Some basic initial state might look something like this for a counter application that increments and decrements a number:

2. The logic of a Smartweave contract is written in a function named handle.

This function defines different actions that can be called on the contract, which manipulate the state. Actions are similar to functions in a normal smart contract or program. Each action will update the state in some way.

In this handler, there are two actions - increment or decrement. The logic here is pretty straightforward.

3. To update the state of the contract, we can call writeInteraction from the Warp SDK.

Here's a basic example of how this might look when calling this function on the server:

Then, we can read the state at any time:

Now that we have a basic understanding of how contracts work, let's start writing some code.

In the root of the project, create a new folder named warp.

In this folder, create a new file named contract.js:

This is the contract for our blogging app.

We have functions to create, update, and delete a post (CRUD). We also have an initialize function which adds a basic authorization rule that only allows the blog owner to call any of these functions by setting the contract deployer as the owner.

Next, create a file in the warp directory named state.json and add the following JSON:

Here, we have an initial state of posts set to an empty object, and author set to null.

We're done with our contract, now let's write the code to deploy, update, and read the state of the contract.

Next, create a new file named configureWarpServer.js in the warp directory.

In this file we're configuring warp server based on whether we're in a testing or mainnet (production) environment.

We then have a function that configures the wallet we'll be using to deploy the contract. If we're testing, we can just spin up a test wallet automatically using generateWallet. If we're in production, we have the option of importing a wallet locally.

Now that we have the ability to configure a wallet and a Warp server, let's create the function for deploying the contracts.

Create a new file named deploy.js in the warp directory with the following code:

The deploy function will deploy the contract to Arweave and write the transaction id to the local file system.

Next, let's create a file named read.js with the following code:

The last function we'll write is for creating a new post.

In the warp directory, create a new file named createPost.js with the following code:

Now we can test everything out.

To deploy the contract, run the following command from the warp directory:

This should deploy the contract to testnet. 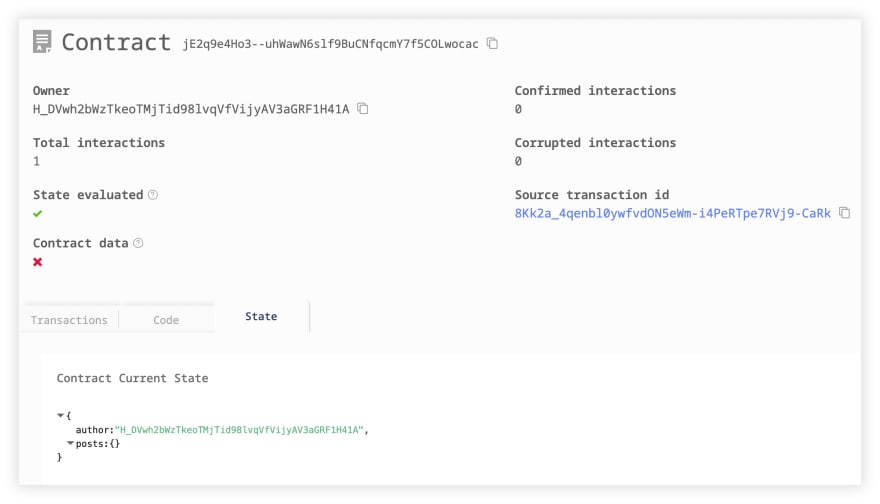 Next, let's read the current state:

The returned state of the contract should look something like this:

Building out the web app

Now that we understand how to deploy and test out a Smartweave contract with Warp, let's build out a front-end application that will interact with it and use it.

Since the application we're building is a blog, we'll need to create two basic views:

We'll also need a file to hold a function we'll be using to configure warp for the client (similar to how we configured warp for the server previously).

Create a new file named configureWarpClient.js in the root of the app and add the following code:

Next, in the pages directory create a new file named create-post.js and add the following code:

Next, update pages/index.js with the following code:

Now let's run the app and test it out:

When the app loads, the post created on the server should be rendered in the UI.

If you'd like to dive deeper and learn more about Warp, Smartweave, and Arweave, check out Warp Academy

How to get current date in JavaScript

How to replace the API Key with Private Apps in Hubspot

Once suspended, dabit3 will not be able to comment or publish posts until their suspension is removed.

Once unsuspended, dabit3 will be able to comment and publish posts again.

Once unpublished, all posts by dabit3 will become hidden and only accessible to themselves.

If dabit3 is not suspended, they can still re-publish their posts from their dashboard.

Thanks for keeping DEV Community 👩‍💻👨‍💻 safe. Here is what you can do to flag dabit3:

Unflagging dabit3 will restore default visibility to their posts.