Working with localhost and multiple repos can be tedious - Apple has a way to automate opening multiple terminal windows and tabs, navigating to the directories that you need, and starting up those services. This is a tutorial to show you how to set up that process.

For me, automation is just about speeding up the process. An example of my work flow looks like:

It may not seem like a whole lot, but it becomes a pain whenever I have to restart my computer and have to restart each of those services needed to run the application. When I discovered that it could be automated, it changed everything.

Applescript came in for the save!

Start with the Basics

Let's start with a simple script to get the hang of the syntax. 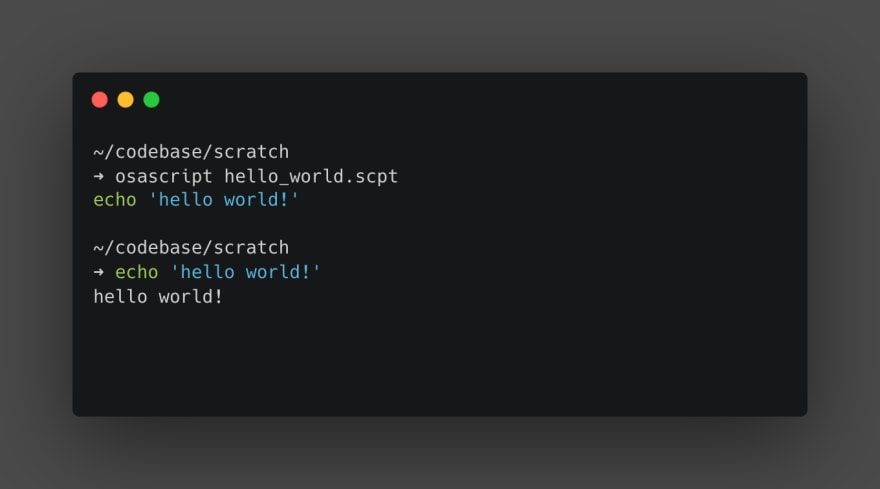 Why does it appear twice? Echoing added the command to the terminal history. If you hit up in the terminal, echo 'hello world! will appear as the last command.

If you hit up again, you'll get your first command, osascript hello_world.scpt.

Now for the workflow automation.

Let's break it down:

Adding to the Script

Here's where the automation fun happens. With each write text, we can pass in the commands that we need. For me, cdkwhub is an alias that cd's into my codebase directory.

In the next tell block, we reference the new tab that was created and write a command to that window.

Continuing to add to the script,

One thing you can do to make your tabs more organized is to set a tab to them. To set a name, use set name to "name". You can do that like so:

Inside of each tell statement you can set a name.

Open the Terminal in Fullscreen

Another thing you can automate with this script is having it open your window in fullscreen. You can do that by adding the following to the top of the script:

Add as a .zsh alias

You can really put your automation in overdrive by creating an alias to run your new script. Using an alias can simplify your command into one single word. An example of my use looks like this:

When you open a terminal window, entering startrepos followed by enter will fire off the automation script.

christa
Music Monday — What are you listening to? (Rock Edition 🤘)
#watercooler #music #discuss
What was your win this week?
#discuss #weeklyretro
Should developers study 20 hours a week after work?
#career

Once suspended, cweave_ will not be able to comment or publish posts until their suspension is removed.

Once unsuspended, cweave_ will be able to comment and publish posts again.

Once unpublished, all posts by cweave_ will become hidden and only accessible to themselves.

If cweave_ is not suspended, they can still re-publish their posts from their dashboard.

Once unpublished, this post will become invisible to the public and only accessible to christa.

Thanks for keeping DEV Community 👩‍💻👨‍💻 safe. Here is what you can do to flag cweave_:

Unflagging cweave_ will restore default visibility to their posts.