Last year we asked developers around the world how happy they were. With that data, we found that developers in Germany are the eighth happiest in the world. We know money can’t buy happiness, but when it comes to your career, salary rates are important. You want to know that you’re earning a fair amount, or maybe you want to be sure you’re not underselling yourself in negotiations.

Luckily we have a lot of data on developer salaries. Because a person’s salary has a huge array of influencing factors, we broke the data down into a number of categories including experiences, role, location, and more. 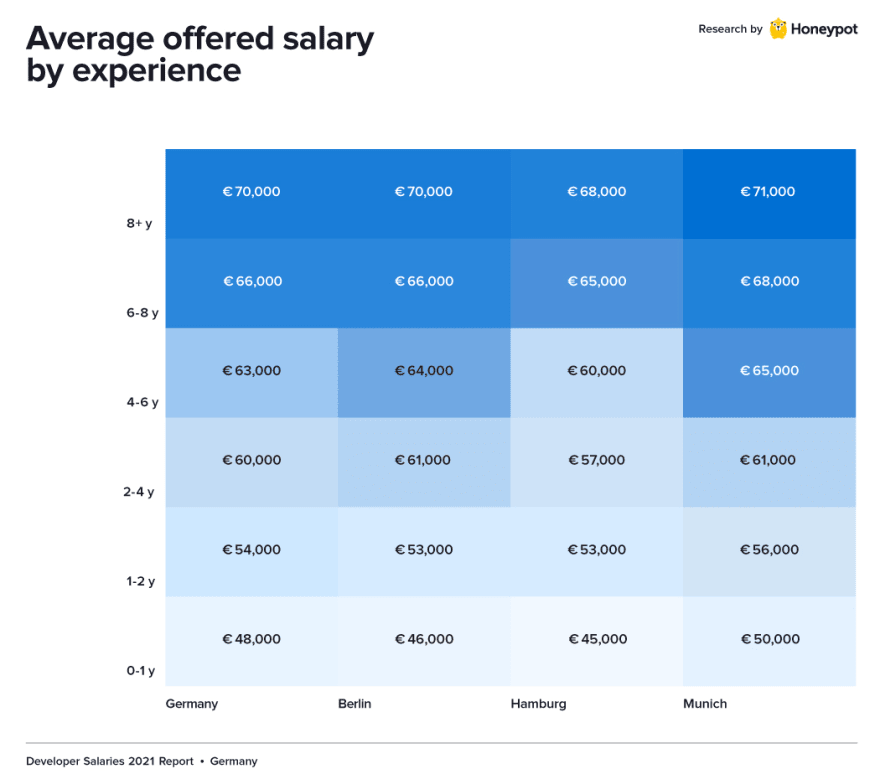 These are the highlights:
-COVID-19 did decrease the number of interview invites that developers received in the past year but it did not make a noticeable impact on salary.

-The average offered salary for developers in Germany has grown steadily from 2016 to 2020, up from roughly €50k to €60k. Compared to neighboring countries like Austria and the Netherlands, this is a pretty healthy amount of growth.

-Berlin offers developers the biggest bang for their buck, with high offered salaries and a low cost of living. 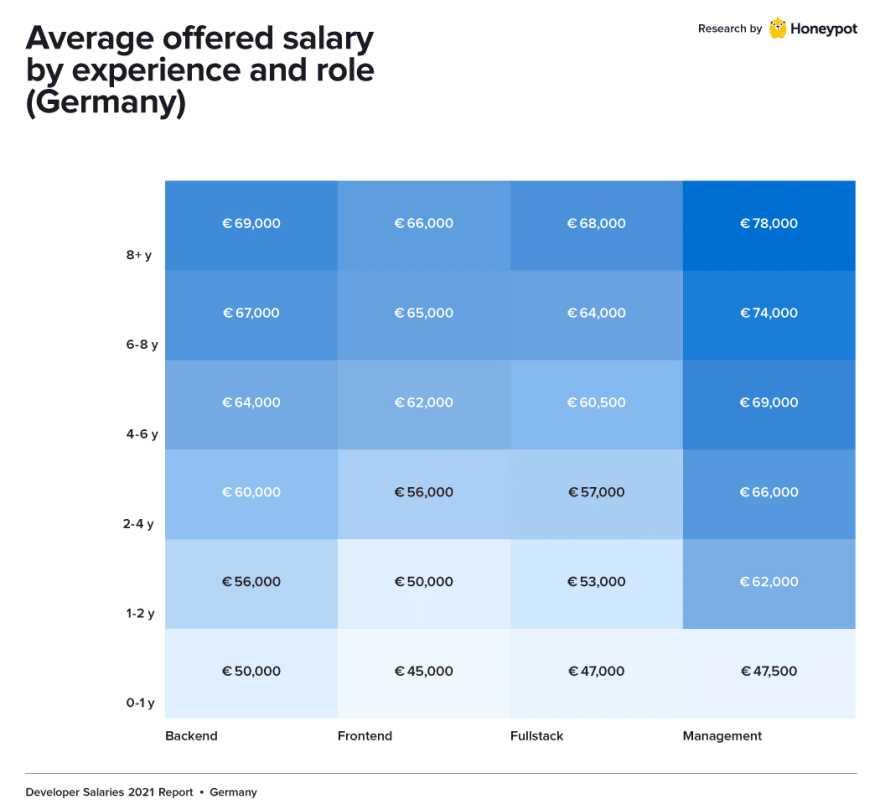 The real money is, not surprisingly, made in management. We found this to be true in other countries as well and not just Germany. When comparing individual contributors, backend developers earn more than their frontend and fullstack counterparts. Overall, backend, frontend, and fullstack developers in Germany are offered an average of €62k while developers in managerial positions are offered around €75k. 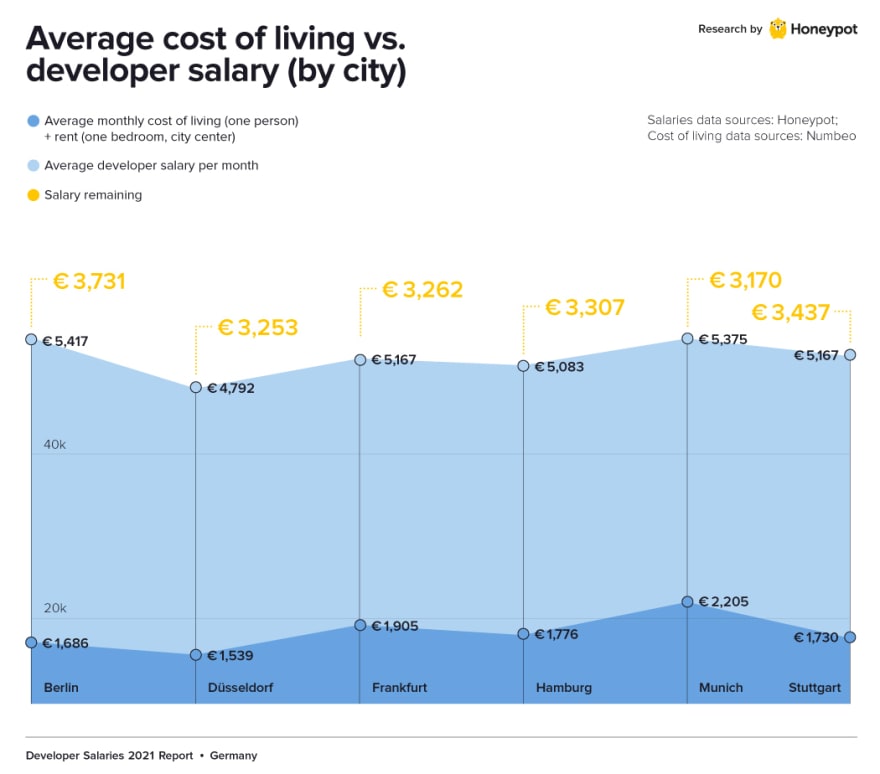 Berlin offers developers the biggest bang for their buck

Everyone knows Berlin is poor but sexy… at least, it used to be. Things are changing in the city and it’s now exploding with tech and innovation. For developers, it’s not just a city that offers a number of job opportunities — it also offers a good salary. 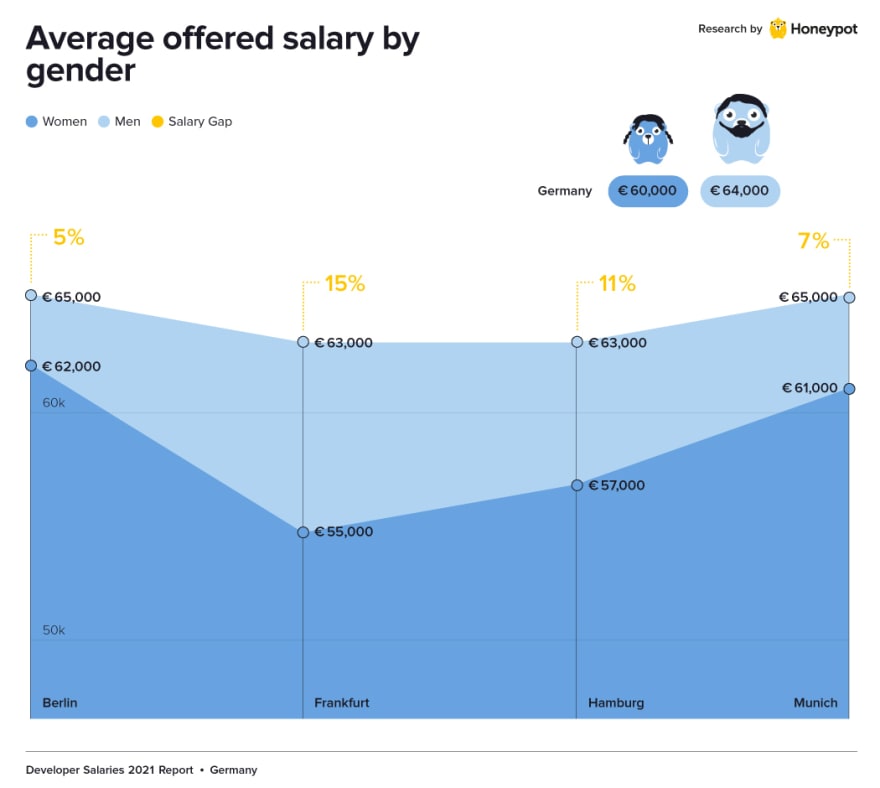 We found that women are consistently offered lower salaries than their male counterparts. On average, female developers in Germany earn €60k and male developers earn €64k. Frankfurt is the biggest offender where men 15% more. Berlin, on the other hand, has the most equal rates, with men earning 5% more.

My first 4 years as a professional developer in a dream company. And why I left.

What is cloud computing? A beginner’s guide

Tips on how to pass interviews process in tech companies.