A few years ago, when I was working at Despegar I wrote a little python script that helped me a lot observing and identifying issues related to CPU usage.

A tiny command line tool that provides a dynamic real-time view of the active threads for a given process with stats of CPU, disk and scheduling.

It's a user-friendly command-line interface that provides a dynamic real-time view of the active threads for a given process with stats of CPU, disk and scheduling.

The metrics make it really powerful is those related to scheduling: time spent on the cpu / on the runqueue.

In some cases it's interesting to know how much time the threads spend trying to get onto CPU, instead of being on CPU. This type of information can be easily obtained with tracing tools like perf and BCC, but these tools require root privilege, something that is often not available in production servers, so you can't use them for troubleshooting.

I ended up developing a script in Python that allows me to visualize in real-time the run queue latency per task by reading the /proc/{pid}/schedstat file.

In fact, it shows some extra stats:

It only works in Linux since it uses /proc/{pid}/schedstat to get scheduling stats.

I kept the code in a single file, so it's as easy as downloading the script:

Some things to keep in mind:

What is a good use case for this tool?

I often use this script when I have to analyze a performance problem at thread level and I want to inspect the dynamic usage of CPU or Disk.

Some questions this tool helps me to answer: 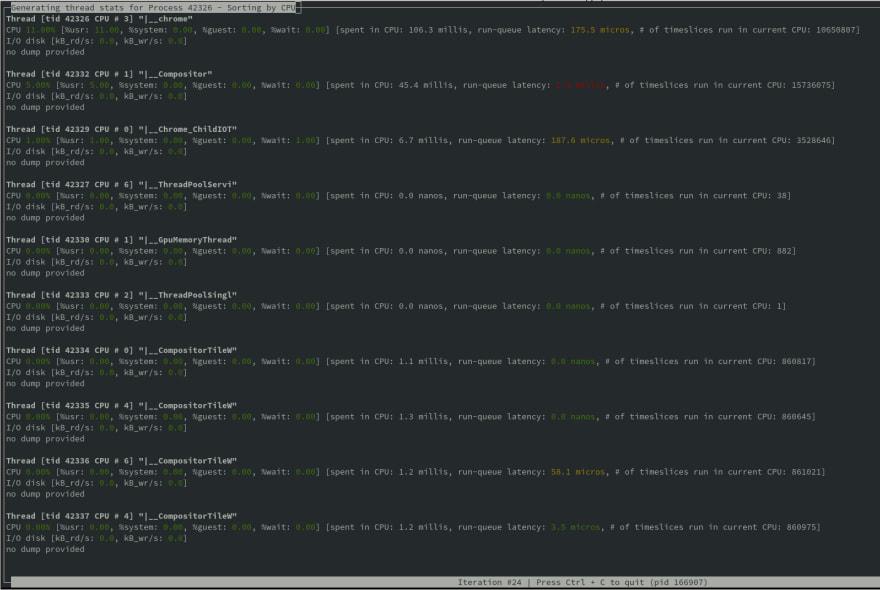 How to configure your WSL resources?