What is Infrastructure as Code?

You can use many declarative infrastructure deployment technologies with Azure. These fall into two main categories.

Hashicorp Terraform is an open-source tool for provisioning and managing cloud infrastructure. It codifies infrastructure in configuration files that describe the topology of cloud resources. These resources include virtual machines, storage accounts, and networking interfaces. The Terraform CLI provides a simple mechanism to deploy and version the configuration files to Azure.

Infrastructure as Code with Terraform has become pervasive for provisioning cloud infrastructure. Azure engineering has invested in Terraform AzureRM provider as a first-party control plane, of equal importance to Azure-Cli and PowerShell, for Azure. As companies mature in their use of Terraform, there is an increasing need to apply DevOps practices to their IaC development to increase velocity and reduce Mean-Time-To-Recover from failures.

Project Lucidity allows you to deploy infrastructure to Azure using Terraform easily. It addresses some of the challenges from above:

Azure Bicep is an abstraction built on top of Azure ARM Templates and Azure Resource Manager that offers a cleaner code syntax with better support for modularity and code reuse. Azure Bicep moves away from the JSON syntax used by ARM Templates and is much easier to read and write Infrastructure as Code (IaC) in Azure.

What is Azure Bicep?

The security of IaC definitions, deployments, and operational workloads are critically important due to the high level of permissions required to implement an IaC solution effectively. This chapter attempts to outline key best practices that contribute to secure IaC strategies.

Use directory services for authentication

Directory services enable you to safeguard user and system credentials by enforcing strong authentication and conditional access policies. These technologies allow you to manage your identities by ensuring that the right services have the right access to the right resources. 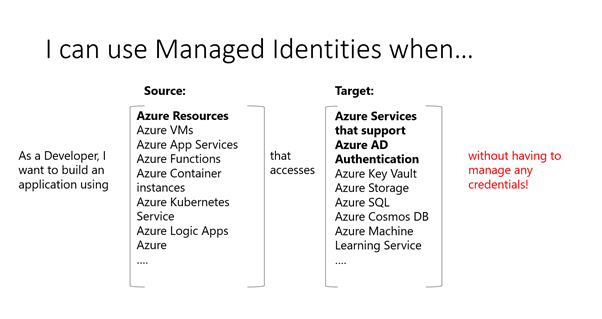 Credential rotation refers to the changing/resetting of a credential(s). Limiting a credential's lifespan reduces the risk from and effectiveness of credential-based attacks and exploits by condensing the window of time during which a stolen credential may be valid.

Apply the principle of least privilege

The principle of least privilege (PoLP), also known as the principle of minimal privilege or the principle of least authority, requires that in a particular abstraction layer of a computing environment, every module (such as a process, a user, or a program, depending on the subject) must be able to access only the information and resources that are necessary for its legitimate purpose. Limiting the access of a computing-environment reduces the risk from and effectiveness of credential-based attacks and exploits by minimizing the blast radius of a leaked credential.

Secure secrets management is essential to protect data in the cloud and can be used to store sensitive information like passwords and certificates securely. Managed secret stores often provide the ability to protect sensitive information using strong encryption while avoiding the need to keep secrets in a repository or as a plain text environment variable.

CI/CD pipelines are at the core of daily operations for many businesses today. When set up correctly, these processes help keep the delivery process consistent by automating many manual tasks and providing visibility into how the software is being worked on.

Branch policies are an essential part of the Git workflow and enable you to: Isolate work in progress from the completed work in your master branch. Guarantee changes build before they get to Main. Limit who can contribute to specific branches.

Use gated approvals in automated releases

Approvals and gates give you additional control over the start and completion of the deployment pipeline. Each stage in a release pipeline can be configured with pre-deployment and post-deployment conditions, including waiting for users to manually approve or reject deployments and checking with other automated systems until specific conditions are verified. 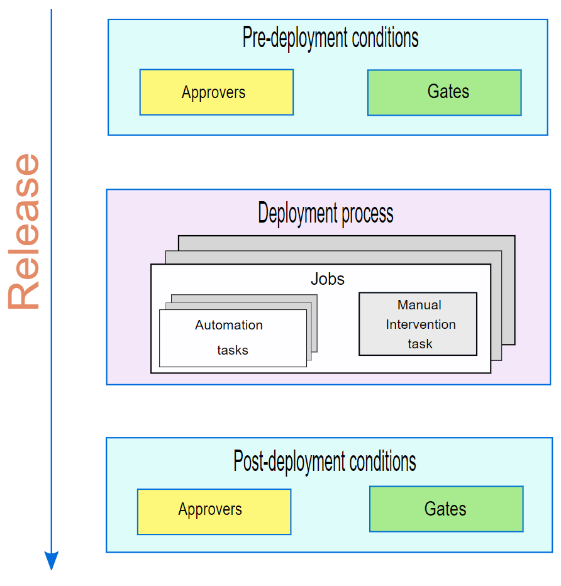 Just as a blueprint allows an engineer or an architect to sketch a project's design parameters, Azure Blueprints enables cloud architects and central information technology groups to define a repeatable set of Azure resources that implements and adheres to an organization's standards, patterns, and requirements. Azure Blueprints makes it possible for development teams to rapidly build and stand-up new environments with trust they're building within organizational compliance with a set of built-in components, such as networking, to speed up development and delivery.

Blueprints are a declarative way to orchestrate the deployment of various resource templates and other artifacts such as:

How it's different from ARM templates

The service is designed to help with environment setup. This setup often consists of a set of resource groups, policies, role assignments, and ARM template deployments. A blueprint is a package to bring each of these artifact types together and allow you to compose and version that package, including through continuous integration and continuous delivery (CI/CD) pipeline. Ultimately, each is assigned to a subscription in a single operation that can be audited and tracked.

Nearly everything that you want to include for deployment in Azure Blueprints can be accomplished with an ARM template. However, an ARM template is a document that doesn't exist natively in Azure – each is stored either locally or in source control. The template gets used for deployments of one or more Azure resources, but once those resources deploy there's no active connection or relationship to the template.

A blueprint is a package or container for composing focus-specific sets of standards, patterns, and requirements related to the implementation of Azure cloud services, security, and design that can be reused to maintain consistency and compliance.

A policy is a default allow and explicit deny system focused on resource properties during deployment and for already existing resources. It supports cloud governance by validating that resources within a subscription adhere to requirements and standards.

Including a policy in a blueprint enables the creation of the right pattern or design during assignment of the blueprint. The policy inclusion makes sure that only approved or expected changes can be made to the environment to protect ongoing compliance to the intent of the blueprint.

A policy can be included as one of many artifacts in a blueprint definition. Blueprints also support using parameters with policies and initiatives.

Using the Blueprints in the Azure Portal is a great way to get started with Blueprints or to use Blueprints on a small-ish scale, but often you'll want to manage your Blueprints-as-Code for a variety of reasons, such as:

Compliance-as-Code can be summarized as the organizational capability to automate the implementation, verification, remediation, monitoring, and compliance status reporting. This automation comes in the form of code and is integrated into the code repositories used by Devs and Engineers. It becomes "just another piece of code." I have written an entire blog post about Compliance-as-Code here.

What are policies and how do you use them with CloudQuery?

Serverless on AWS with CDK #1: App Runner with VPC Integration