So, I updated my system recently. For those new to Linux, there's an incredibly big difference between using Linux in a DevOps context (for deployment of web app infra), vs running it as a desktop OS. In fact, I think that the use case is dramatically different enough that, if you do only one of those things, then the majority of that knowledge may not be particularly relevant to the other. I do highly, highly recommend daily-driving Linux, however. And after I did it long enough, I wound up overwriting my Windows drive so I could install more Steam Play games... 😹

So, it'd only been about a week since I last ran an update, I'd estimate. The update was unusually large, so I figured it merited a post to share things I've observed, for other Arch users, and also, others considering switching to Arch (or an Arch-derivative), but are hesitant to Switch To Arch for some reason. 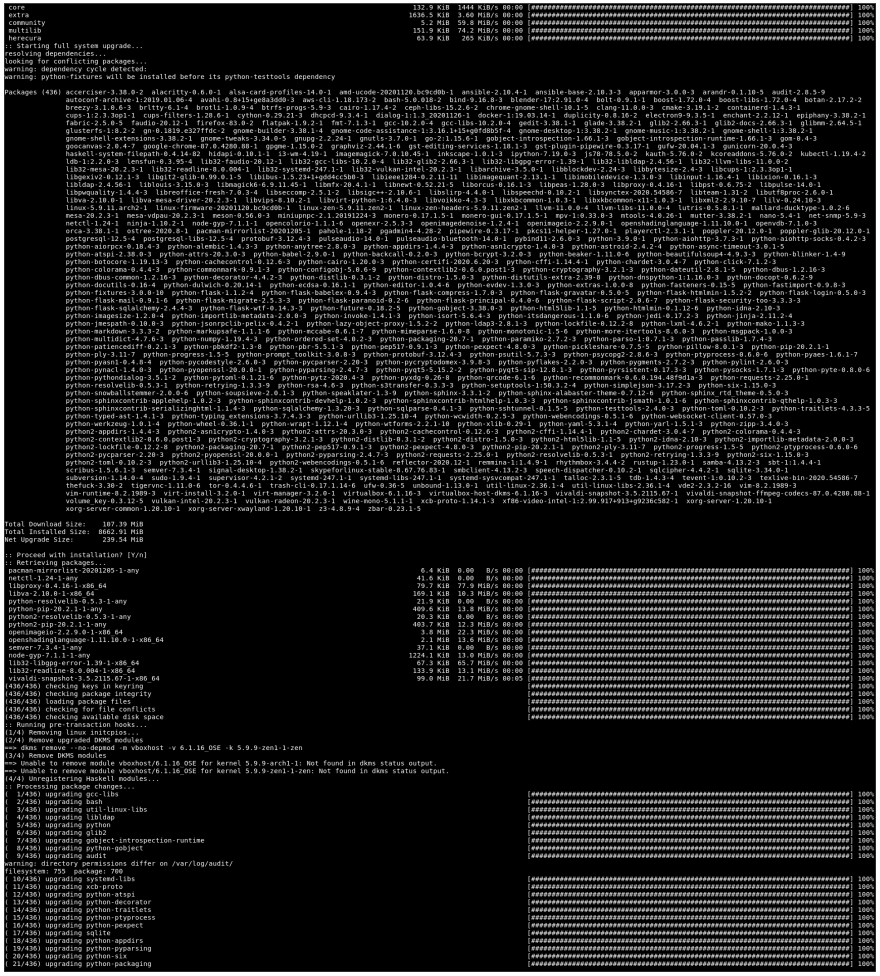 So, first, it looks like a lot of python got installed for whatever reason, and something big happened there (ah yes, Python 3.9 was released back in October, congrats guys, how's that python2 switch going, and also, why is it still so hard to install and build Python projects from scratch... I kid, I kid, but kindly, kindly get your act together - thx, a Rust user). Regardless, it took me longer to read through what updated than it took to do the update, reboot, AND install the updates for all my AUR programs. I usually take the time to read through the updates while I'm updating.

Speaking of the AUR, if you're not using yay, you should consider it. I haven't used other AUR package managers, but I haven't really needed or wanted to. Though, sometimes my keychain gets borked, and although I suspect yay could probably fix that for me, it sometimes doesn't. That usually results in me doing a search for the error, and then I'll usually find the command I need to run to fix it.

I don't usually do automated updates, since updates don't usually break things, but they break the system sometimes, and I don't want to wake up to a broken system, nor do I wish to reboot every night (why else would I want 64GB of RAM?), which is what I usually do, but only when the kernel is updated, otherwise, that's usually unnecessary. further, sometimes the update doesn't work (this happens somewhat more frequently than things breaking). I've also never seen an update hose the box or cause it to become unable to boot, cross my fingers. Regardless, Arch is not for people who don't care to learn how to also Fix Their Linux. It's not that hard, though, since the ArchWiki is plenty adequate, if not always on par with Gentoo's wiki efforts, I suppose.

Fixing Your Linux usually just requires a quick DuckDuckGo search, of course (anything but Google, they hate their users, and will probably kill Google Search too some day), or just looking in journalctl, which is surprisingly helpful. Sometimes when things break, I can usually fix them (at least temporariily) just by looking in there and trying the usual things, such as, oh, I dunno, Reading The Error (often surprisingly helpful!), and usually results in you having to delete something and re-running the thing that didn't work.

So, if you are a frequent reader of Phoronix, and you don't want to wait six months to use the latest thing you like, and you're beginning to suspect that it's more trouble than it's worth to hammer in new stuff to your distro without the direct consent of your package manager (I'm looking at you, apt) all the time, then I recommend Switching To Arch.

Also, don't let Windows users fool you. Steam games often work just as good (and sometimes better, in the case of Stellaris), and that's not even including the ones you can install with Lutris and GOG. And if you're still using macOS, I've got incredibly good news! Linux gaming is in a much better state, since Proton doesn't work on macOS, and... may take a while longer... So, I suggest you Switch To Arch. Oh, and enjoy less of the frustrating stuff Apple does to hold your system, and other unsurprising mothership shenanigans. Believe me, this is coming from a former MacBook 2019 daily driver. The machine I used cost $4000. My current one cost much less to build, and is better in every way, if not as small or... portable. Not as hot, or loud, due to all 140mm fluid bearing fans, though!

Switch To Arch. Unless, for some reason, you're using Gentoo or NixOS, at which point, I'd still suggest thinking of Arch, since it does have benefits over either, but I don't see it as unequivocally superior as it is to other mediocre desktop distros like Debian/Ubuntu or Fedora/CentOS.

Install Tmux on Git for Windows

How to run shell scripts in Java