Welcome to my blog post; this is Giacomini Federico. I work as a Front-end Developer for the AnyLogi team. Today I would like to introduce you to Nx, a “Smart, Extensible Build Framework” for building your Web Applications.

1. A Quick introduction to Nx and Monorepos

Nx is a framework that allows you to architect, test, and build your project at any scale with the most popular modern Front-end frameworks like React and Angular and Back-end ones like NestJs or Express. To make this possible, Nx comes shipped with a large toolset that simplifies your Monorepo management. If you are unfamiliar with Monorepo, it is basically a version-controlled code repository that holds many projects and libraries. The Monorepo approach has several benefits over a common one. Here are a few:

But why use Nx and not just create a simple angular or react workspace? What sets Nx apart is the extensive toolset that it brings to the table, helping you across all the facets of building your Monorepo. Here are some of the valuable features of Nx :

2. Why did we choose Nx for AnyLogi

Anylogi is a Logistics Management Platform connecting brands with WMSs, warehouses, and delivery companies worldwide. The Front end is built in Angular, with a NestJs application serving as a gateway to our Back-end. Since the application requires connection to multiple WMS with different guidelines and requirements, we decided to make the logic decoupled as much as possible. This would also come in handy since our app consists of various user types with different permissions and functionality.

In previous projects I worked on, the basic approach to handle such cases was to create an Angular directive hiding or showing some UI elements, with conditions in code for calling or not some API. But such an approach makes scalability very difficult. The more User Roles added, the more conditions and logic were added to the FE, making it hard to maintain and test the multiple cases. Another issue we faced was when creating customized user roles functionality and experiences. In some cases, we wanted error messages for the admins to be more detailed than for users. In other, we would show advanced steps or fields for admins while simplifying the same process to users. All those changes would add additional conditions and fragment our application in parts that were not working together in harmony.

With Anylogi, we decided to follow the Monorepo approach. Instead of having a single project with a hard-to-grasp logic and conditions all over the place, or multiple repositories that would need to work as one, we built a single Monorepo with Nx to handle our various projects and libraries. It makes things quicker and easier when sharing common logic, modules, and features across our workspace while maintaining the ability to easily customize the experience of a specific user type.

We created three projects based on our user roles requirements and desired experience. We separated some common components used in those three projects (like the headers, logins pages, etc.) in UI libraries used across all projects. Finally, We separated our feature logic into various feature libraries, that way, it would be simple to add or remove functionality when needed. 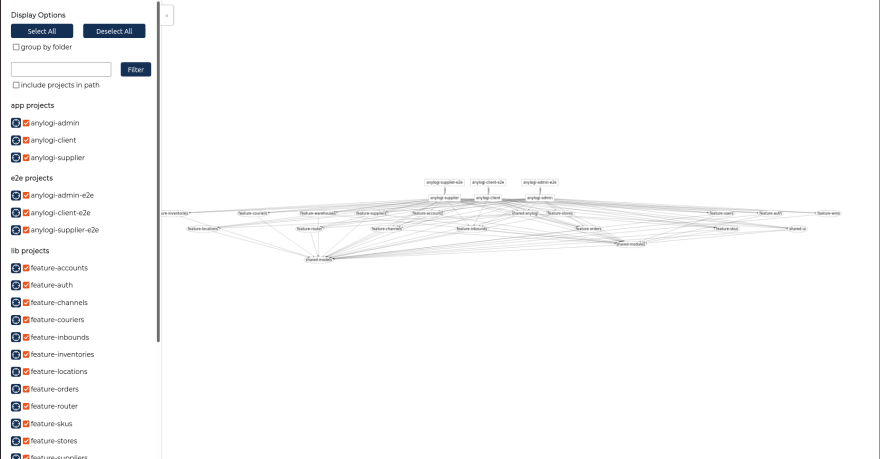 Thanks to Nx cached operations, we can modify a single Front-end app and deploy it independently of the others, or modify a library, rebuild the dependencies and deploy only that library-affected apps.

One thing we missed and might add later is the addition of our NestJS gateway to this mono repository. Right now, our Back-end Gateway exists on a different repository, which creates some code duplication, but it would work all the same, if not better, if we added it in our Monorepo.

In this last part, we will create a simple Nx Monorepo with a project depending on a library. We are going to use angular, but you are free to set up React or View.
Be sure to replace by what you want the content between bracket { }.

Let’s start by creating our workspace.

You will have to choose the workspace's name, what to create in it, and additional options based on what you selected. I chose angular for this example, but you can use whatever you want or add new projects and libraries later. You will also be prompted to use Nx Cloud, I will not go over it in this blog, but you can find more information on the Nx website Nx Cloud

You can test the project by navigating in the workspace and launch the project (those names are the ones you set previously) :

you should see on http://localhost:4200/ the default Nx start page: 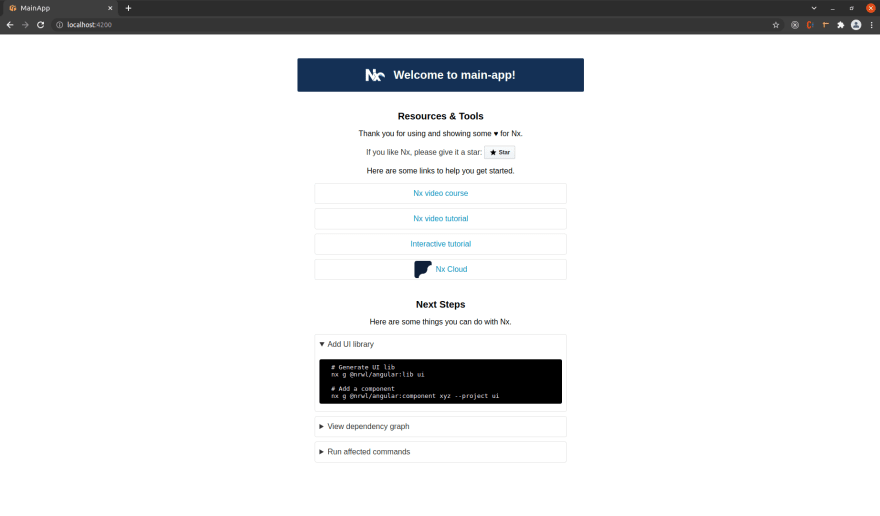 This will generate a new folder under libs named like your library and will contain the code defining your library. By default, this will result in an angular module named like the library. But Nx will also add additional configuration in your workspace, the most crucial part being the following.

If you go to the tsconfig.base.ts at the root of the project, you will see a new line added that should look like (with the name you selected) :

This absolute import path points to your library definition. Anything exported in this file will be sharable across your workspace. 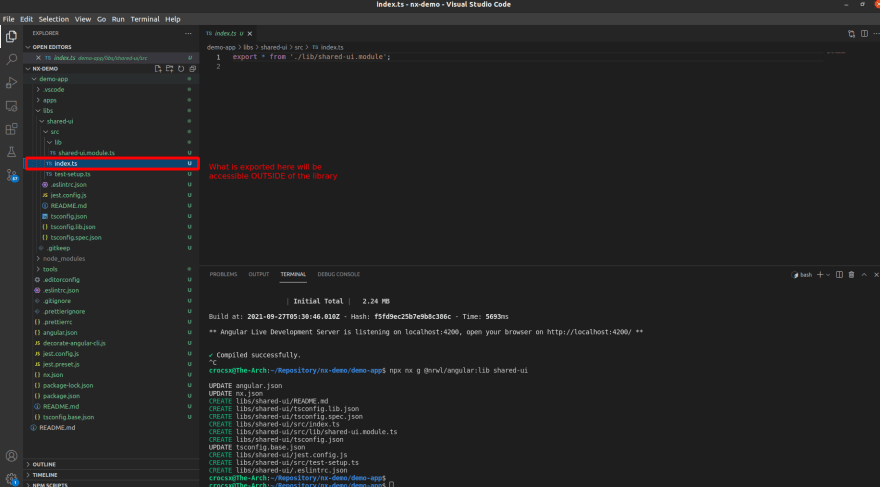 For Nx to work correctly and your project to be clean, ANYTHING that you want to export from the library should be present in this file. Additionally, EVERY project that uses this library must ONLY import and use what is defined in this file.

Let's add a component to this library. We will use the Nx CLI to generate the boilerplate the same way Angular CLI does it. I usually use Atomic Design to organize my components, but for the sake of simplicity, let’s add it at the root of the library.

Voila! We created a component the same way we usually do, and it is already declared in the library module. Let's add some code to this component at the top of the Nx demo page. I will create a simple text header.

in the .css (or whatever per-processor you chose)

Double-check if the component is correctly added to the library module using the name you have previously chosen for your library and component. In my case, it looks like this :

Check also that the module is exported in the library entry point (index.ts). If yes, let's import our library into our main project. 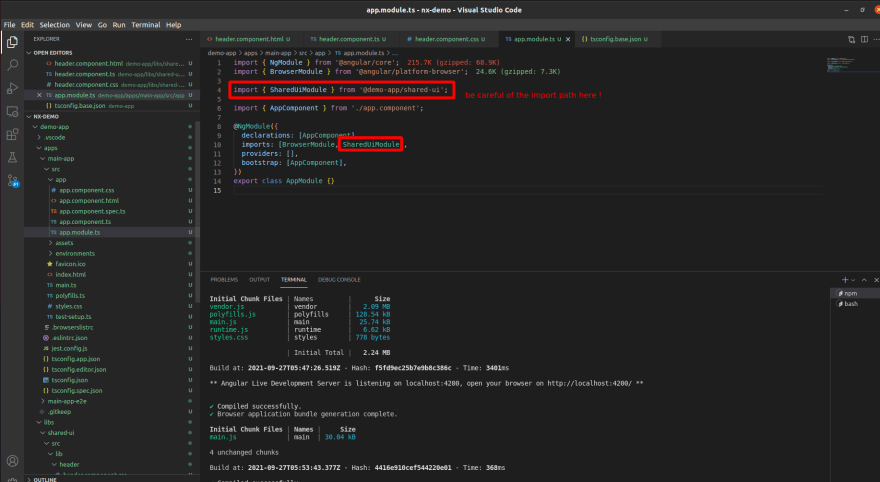 Now add our component in our project app.component.html, and you should see it appear : 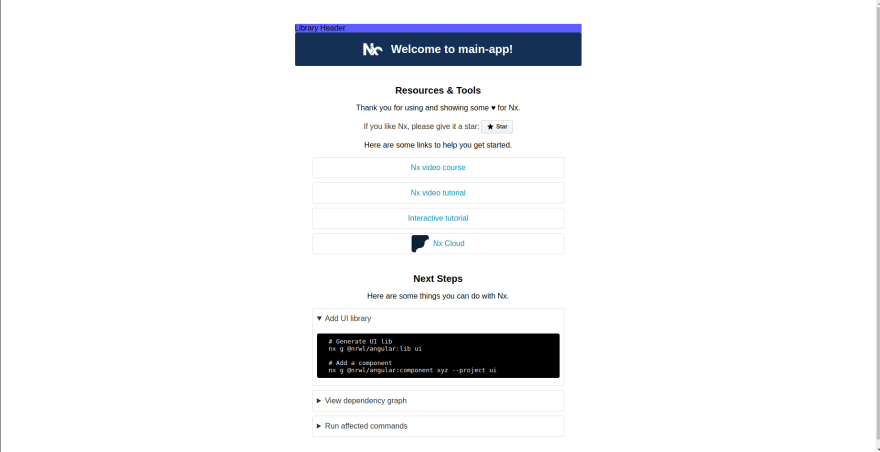 You can now also use

to generate the simple dependency graph of our project : 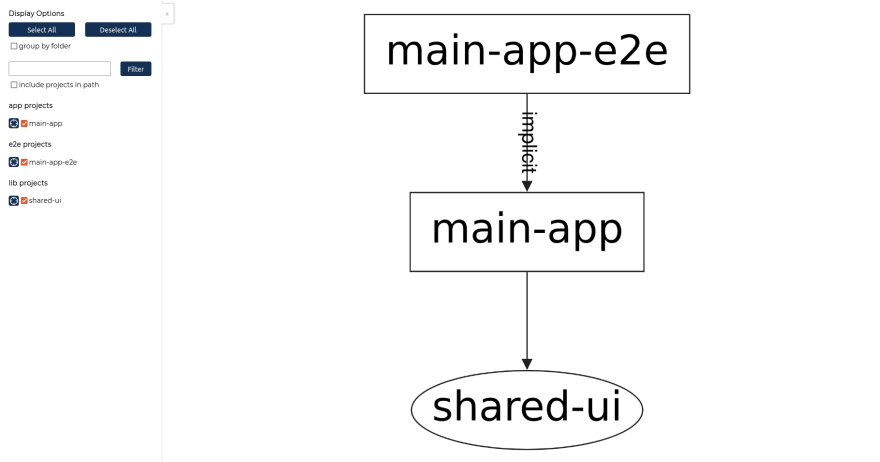 You can find this very simple Monorepo here https://github.com/Crocsx

There is a lot more you can set up on NX to make your project easier to manage, and we only scratched the surface. I hope this short blog post gives you enough information to understand the basics and the possible applications of such a tool for your future project. I hope to go more in detail in a future blog post and showcase much more functionality. Until then, have a great one!