A co-worker wrote a web app to solve Wordle puzzles, and I thought it would be fun to port it to Scittle. It works, but not super well (as you shall see). Use his app instead.

I used the following tools for static site development

Everything worked well, but Scittle seemed laggy. The lag might be attributable to a mistake that triggers too many redraws of some components. Readers are welcome to submit a PR to fix it.

Rather than steal Vincent's algorithm, I wrote my solver from scratch. I cannot say the same for the window-dressing: I have blatantly stolen his CSS. 😄 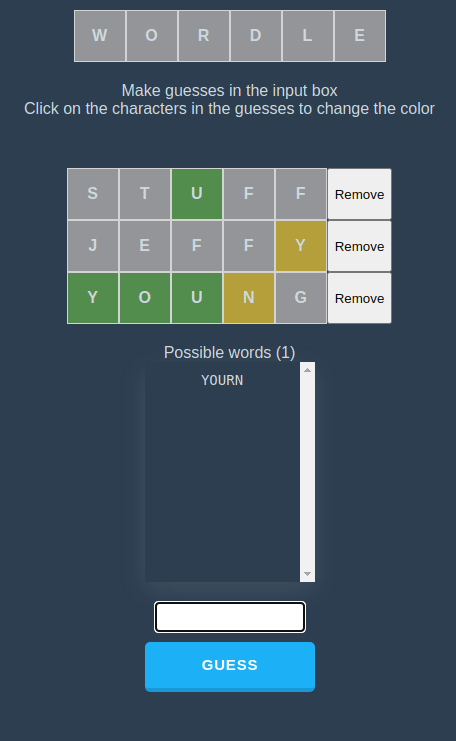 The algorithm is a fancy filter/remove predicate at bottom.

An excellent first step would be determining which letters are possible at a given index. A letter is allowable if it's

These possibilities are mutually exclusive.

I have modeled the individual lists to facilitate this function.

unfit-word? can now be written:

This code represents most of the work required, but there's an important piece missing. If a letter is in the yellow list, then it must be part of the word. But, unfortunately, we haven't guaranteed that.

If we could transform a word into a set containing only the letters that aren't in a given set of indices, then it would be possible to perform this check.

I will define a function called index-yellow-letters.

This get's pretty close to what we want.

Next, let's define a function called unfit-subword?, where 'subword' refers to a set of letters, e.g. #{\b \o \t} in the previous example. This function will encapsulate the rest of the logic we worked through earlier.

Using Selmer & Hiccup for static site construction (and Babashka's task runner for running it) worked so marvelously that I want to use them to write a fully featured static site generator.

Shout-out to miniserve. I didn't need it for this project because I wanted to generate a single file. If I had generated multiple output files, Miniserve would have been very useful for testing. 😄

If I want to write a "general use" static site generator, I will likely need to add many tags. yogthos/selmver#278 for reference.

Scittle is super cool but under-performing in its current state. You probably noticed some lag when toggling colors.

As you can imagine, a color toggle alters all three of these "ratoms." This behavior means that, unless there is some debouncing under the covers, color toggling triggers more redraws than necessary. I will happily accept a PR if you think this is the problem.