In recent times, React.js has seen itself rise in popularity and become one of the most loved front-end frameworks of all time. We will be looking at these 5 boilerplates for React today: 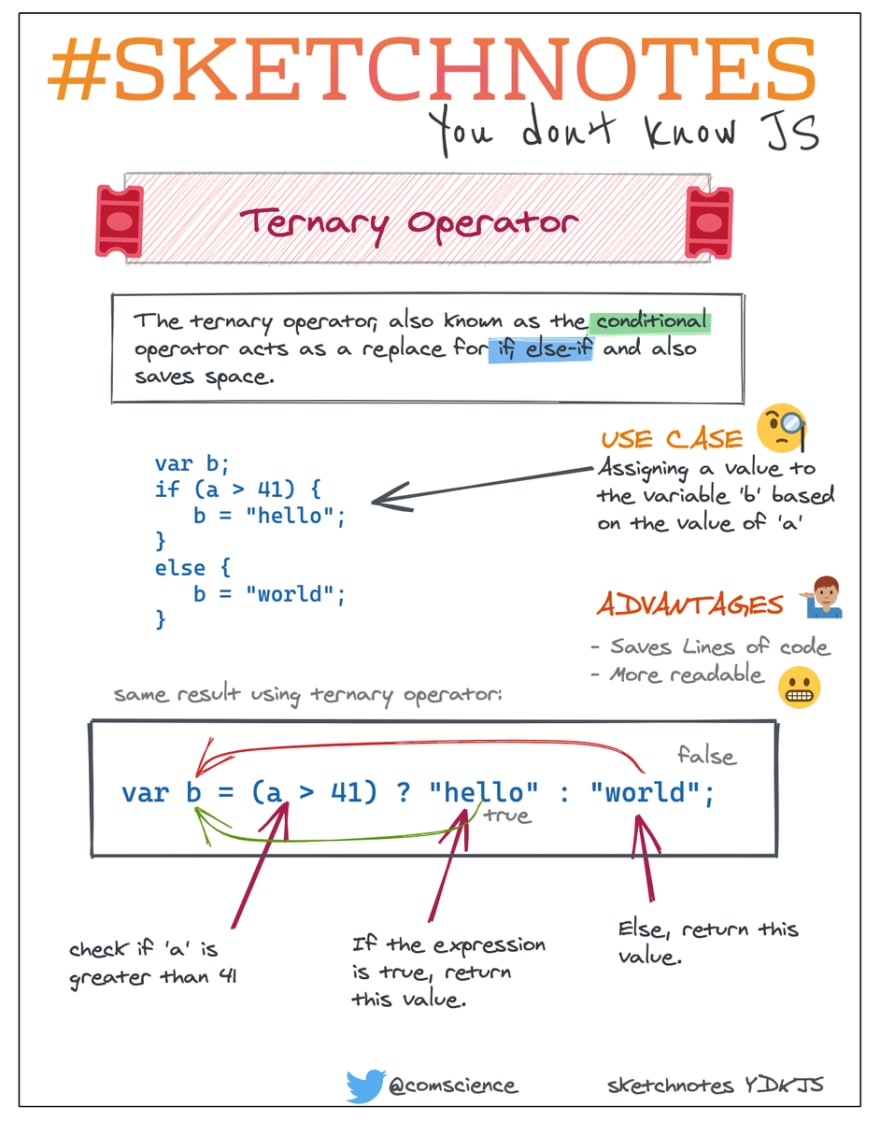 Today's #sketchnotes are about #ternary #operators in #javascript

I'm creating #sketchnotes for #javascript concepts from the book: 'You don't know JS(@YDKJS)' by @getify using @excalidraw by @vjeux

Create React App is a comfortable environment for learning React, and is the best way to start building a new single-page application in React.

In order to set up a new app using create-react-app, we run the command

The npx command being used here is different from the npm commands. npx stands for Node package execute which gets automatically installed onto the system while installing npm version 5.2.0 or higher. The specialty of the npx command being that it can execute any package from the npm repository without the need for installing the package beforehand.

That command creates a new folder called my-app in the current directory and sets up a react project inside that folder. In order to run a development server and work on the app, we use the command: 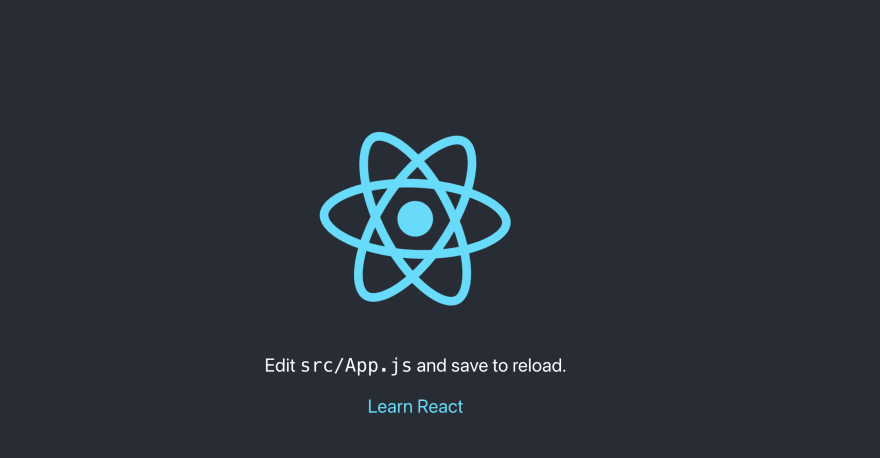 And when satisfied with the code changes, we can use:

Which generates an optimized build folder that can be deployed wherever we want to host our app.

While the simplicity that create-react-app brings to the table is much appreciated, there are some scenarios wherein we need additional control over our codebase and its features. To handle such scenarios, create-react-app provides us with an option to customize the build tool or other configurations by running the script:

This is a one-way operation that removes the single react-scripts dependency that did all the heavy lifting behind the scenes, and bring back all the dependencies and transitive dependencies like webpack, babel etc back into the package.json where the user can have full control over them.
dependencies before ejecting:

It is usually not that common to eject from create-react-app but it is good to have that option if you know what you are doing.

So in case you are looking for a tried and tested way to get started with react development without the hassle of doing things yourself, then create-react-app is the tool to use.

In order to get generate the boilerplate, we just need to run the command:

Thereafter, we answer the questionnaire and at the end of it, a Next.js code repo is set up for us. There is also a provision to bootstrap an app based on any example from the official documentation page by using the -e or the --example flag.

In order to start a dev server, we run:

This brings up the home page of the dev server: 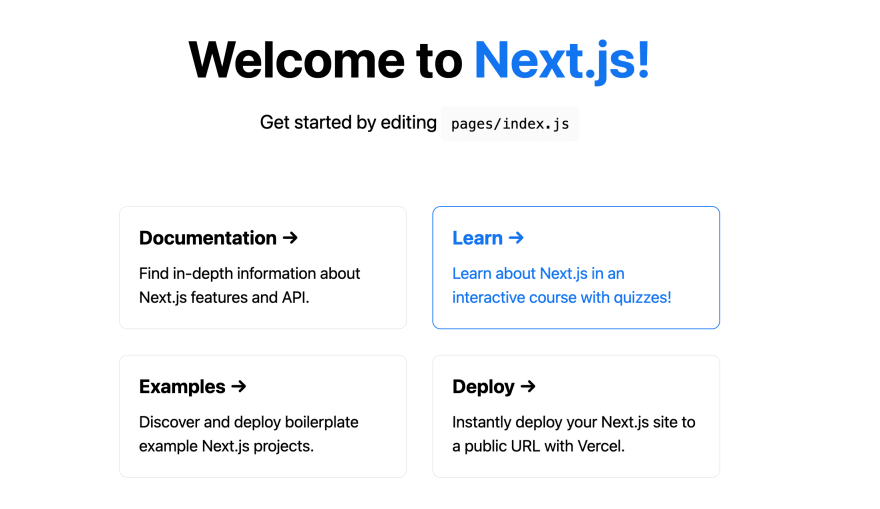 In the code repo, create-next-app creates a folder structure that looks something like this: 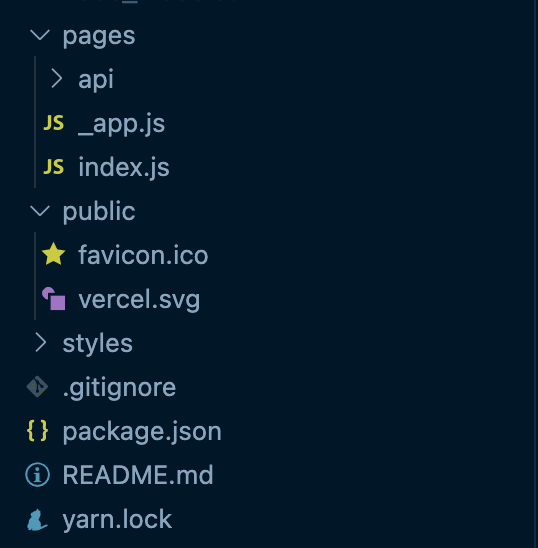 Any JavaScript files that are created in the pages directory create routes in the Next.js app with the same name as that of the file. Any assets (like images) required are to be placed inside of the public folder. CSS and LESS are supported by default.

If your requirement is that of a rather static site, and you are looking for a solid react framework that is way ahead of others in terms of Server-side rendering and Static-site generation, definitely go ahead with Next.js and you will not be disappointed.

Vite is a relatively new candidate in the frontend framework tooling space that is created/maintained by Evan You of Vue.JS fame. Vite is a universal solution that can be used to bootstrap projects from several tech stacks using templates, which at the present, support Vue, React, Preact, etc.:

For the scope of this article, we will explore the creation of React projects. In order to initiate the repo creation, we run

which brings up this selection menu:

Selecting the react option creates a react project in the directory. What is interesting to note is that it takes roughly a second to set up the repo as opposed to other tools which take a few seconds for the entire process. After the repo is setup, we need to move into that directory and install the vite package as a dev dependency.

Then, we can run the dev script as:

Which brings up the default UI at localhost:3000. 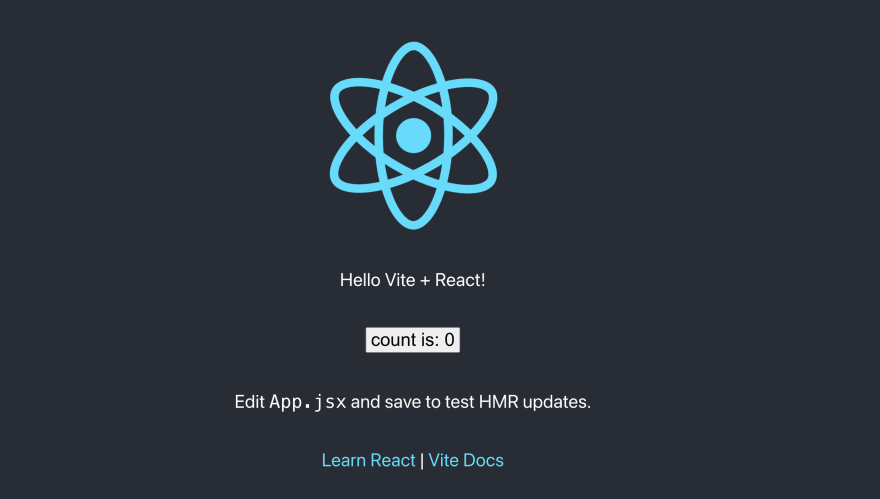 Do note that in order for the dev script to run properly, we need to be on the latest build version of Node that supports worker_threads, else, we get this error while trying to run the dev script:

The latest version of npm can be installed and the several versions installed on your system can be managed by using nvm.

Vite is different from the other boilerplate tools in this list as it was built from the ground up keeping the Developer Experience (DX) in mind. Quoting from Vite's official documentation page:

Vite (the French word for "fast", pronounced /vit/) is a new breed of frontend build tool that significantly improves the frontend development experience.

Even though vite supports an exhaustive set of feature list, the main problem that Vite set out to solve was the issue that most bundling tools (think webpack, parcel) face at scale: Whenever the code base grows to a decent size, the bundler takes up several minutes to spin up a local instance of a dev server. Also, with respect to updating code and getting a live preview, even with the optimizations like Hot module replacement (HMR) in place, it still takes several seconds for a code change to reflect onto the UI in case a critical file is modified.
Vite solves these problems by:

While the development server does not bundle code, the production scripts still build a bundle using Rollup which is highly optimized.

Hence, if you are looking for something that is on the bleeding edge as far as developer experience, future-proofing, & performance enhancements are concerned, react-vite is your tool.

While the basic premise based on which the library is built is the same as that of others, the steps to set up a new code repository are slightly different. Firstly, we need to clone the setup repo:

Next, we need to move into the cloned repository and run the setup script:

And then the start script to kick-off the dev server:

This brings up this home page: 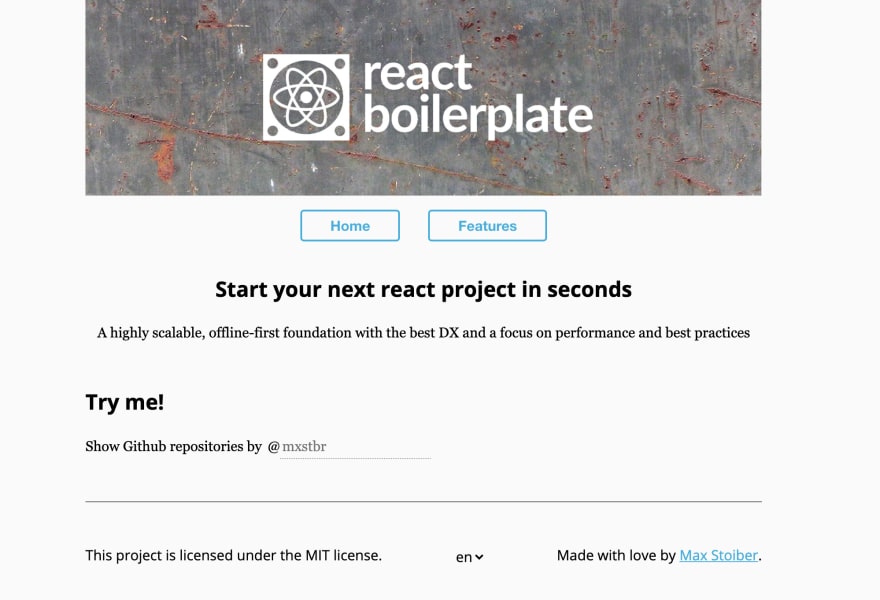 The main difference between other tools on this list and react-boilerplate is that, post setup, we get a highly opinionated, yet highly feature-rich development setup with feature support for react-router for routing, redux for state management, redux-saga for enhancing redux, reselect for optimization, immer for immutability and styled components for fast-tracking development. Even the project structure is highly opinionated with separation between containers (connected to redux store) and components that are pure components.

With that in mind, if you need to get started with react development needing all the bells and whistles associated with a react project right from the beginning and don't mind being tied up with an x technology to achieve y outcome approach that is pre-decided by the library creators, then react-boilerplate is a strong candidate.

Lastly, let's take a look at react-starter-kit which describes itself as an **isomorphic* web app boilerplate*. The home page also mentions that react-starter-kit is highly opinionated which means that it has already selected the tech stack for us which comprises of Node.js, Express, GraphQL, etc. In a way it takes the load away from the users of the boilerplate by making the decision for us while also making sure that we follow the current best practices in the industry.

In order to get started with the boilerplate, we need to clone the latest repository and use that as the starting point:

Then, move into the created folder and install the dependencies:

And start the dev server as follows:

That brings up the boilerplate home page: 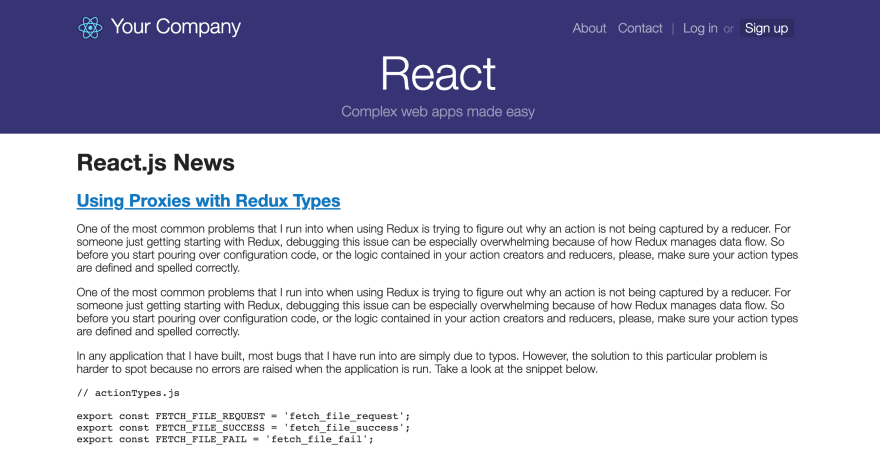 The main feature of this boilerplate is that it is highly feature-packed, yet highly customizable. In addition to the exhaustive file structure that we get at repo setup:

And the number of scripts that we get out of the box:

The library also makes sure that it provides several recipes which are like official guides that explain how to accomplish X? while working with react-bootstrap which makes it super handy.

With those features that react-boilerplate is willing to offer and the customizations that it provides, it is worth giving a shot if we are looking for an Isomorphic boilerplate that is different from create-next-app.

With that, we wrap up the roundup for Top React boilerplates in 2021. As we can see, each one of them comes with its own set of Things it does best and Things it is not so good at. This means it all comes down to the use case at hand. It also means the choice that we make will vary greatly based on the nature of the end result we are aiming at but at least the good thing is, that we are not short of choices.