chuck is a small app you can use as a training tool for deployingShiny applications.

In late December the ThinkR team followed a three day workshop onKubernetes, which was the opportunity for us to receive a propertraining on how to deploy apps to Kube. One challenging thing for thistraining was to find an app that was useful for toying around: the OldFaithful Geyser Data app is nice when you start Shiny, but it lackswhat you’d expect a production Shiny app to have. For example, itdoesn’t have any external inputs, it isn’t plugged into any db, and ofcourse you don’t have any feedback about the context of the application(server information, R session info, etc.)

chuck is a small, relatively funny Shiny app that contains somefeatures that can be used to train your skills when it comes todeploying Shiny apps with Docker and Kubernetes. 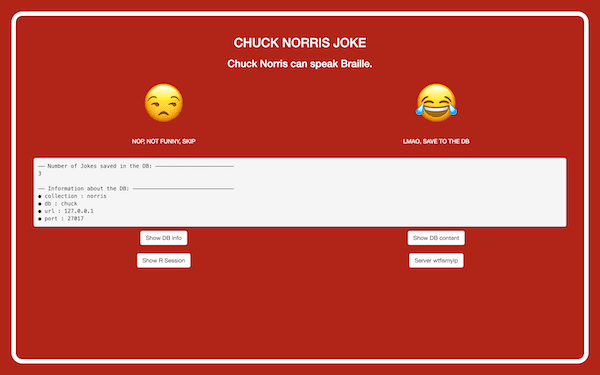 Let me describe the infrastructure of this app: 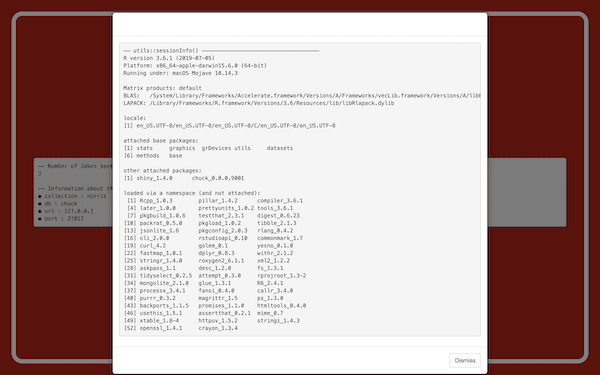 You can find chuck on my GitHub at: https://github.com/ColinFay/chuck

You’ll find the app in the chuck/ folder. It’s a rather basic ShinyApp built with {golem} so nothing fancy here.

The Dockerfile at the root of the project is the one used to build thecontainer for https://hub.docker.com/repository/docker/colinfay/chuck.As you can see, it contains a series of environment variables which areused inside the Shiny App to connect to mongo. It defaults to serving onport 3838 but that can also be set by an env variable.

If you don’t want to go into too much trouble, you can simply run:

In the kube/ folder, you’ll find the YAMLs used during the training todeploy the app with minikube. If you’re in minikube right now, you’llprobably just have to git clone and kubectl apply -f chuck/ to getthis running. This folder contains three yaml files for the mongodatabase: one for the deployment, one for the persistent volume claim,and one for the service.

The shiny app has more files: one for the deployment and one for theservice (classical), and also a configMap and a secret, which are mainlyused as an example for practicing these features. The ingress was thereto help exposing the app to the world during the training, but you mightwant to use other configs for your platform (for example, I had to useanother method for Google Cloud Engine).

The main goal is to have something to exercise your skills, so maybeyou’d want to write your own Dockerfile & kube YAMLs.

No statement can catch the ChuckNorrisException.

Artificial Intelligence: Something about monkeys, editors and glorious words.

How to use zlib in Termux

Once suspended, colinfay will not be able to comment or publish posts until their suspension is removed.

Once unsuspended, colinfay will be able to comment and publish posts again.

Once unpublished, all posts by colinfay will become hidden and only accessible to themselves.

If colinfay is not suspended, they can still re-publish their posts from their dashboard.