This article was written by our CEO and developer Tiago Duarte

Howdy dear reader 🖖🏽, hope you are safe and healthy during these troubled times.
During the past 3 years, we have developed a few projects using the Phoenix Framework for Elixir. And as soon as LiveView was announced, we could not wait to use it!

We have been building a platform where using LiveView made a lot of sense, since we wanted some of our features to use an interface that could be updated in real-time. For example, we wanted administrators of the platform to be able to see, on a map, the sightings that the users of the app were reporting on certain places, as they happen. Let’s call it a live map.

Before digging into the problem, let’s take a look at the technologies we are using. We are assuming that you are familiar with Elixir and Phoenix.

LiveView provides rich, real-time user experiences with server-rendered HTML.
The LiveView programming model is declarative: instead of saying “once event X happens, change Y on the page”, events in LiveView are regular messages which may cause changes to its state.
Once the state changes, LiveView will re-render the relevant parts of its HTML template and push it to the browser, (…) LiveView does the hard work of tracking changes and sending the relevant diffs to the browser.

Once again according to the documentation:

The Maps JavaScript API lets you customise maps with your own content and imagery for display on web pages and mobile devices.

For you to get up and running, and have a page that displays a map centered in Sydney, you just need to do the following:

In our live map, we will need a bit more than just showing a static map. We will need the map to also show markers, indicating where the users are reporting the sightings.

Also, the markers need to show up as soon as users report them 🤯. You might be thinking: “well we have LiveView so it should be easy”. Let’s try it out and see for ourselves.

We have prepared a repository that you can use and jump to specific parts of the article, to avoid doing the boilerplate for yourself.

The initial setup contains the LiveView automatically generated project.
We opted to use the --no-ecto option when generating the project as we won’t be needing Ecto.

b) Adding the map to a LiveView page

We simply added the HTML+ CSS+JS code described in the section above for the Google Map to show up.

Please don’t forget to add here your Google Maps API key to the project if you want to see it working.

If you now run the project (mix phx.server), you will see that the map shows for a brief moment, disappearing right after. Where did the map go? 🤔

c) Keeping the map on the LiveView page

A LiveView begins as a regular HTTP request and HTML response, and then upgrades to a stateful view on client connect, guaranteeing a regular HTML page even if JavaScript is disabled. Any time a stateful view changes or updates its socket assigns, it is automatically re-rendered and the updates are pushed to the client.
(…)
After rendering the static page, LiveView connects from the client to the server where stateful views are spawned to push rendered updates to the browser, and receive client events via phx- bindings. Just like the first rendering, mount/3 is invoked with params, session, and socket state, where mount assigns values for rendering.

If you want to go deeper into the topic, this video explains very well how the inners of LiveView works.

In our case, what is happening is that:

The good part is that the creators of LiveView thought about these cases and give you the possibility to control the patching mechanism:

A container can be marked with phx-update, allowing the DOM patch operations to avoid updating or removing portions of the LiveView, or to append or prepend the updates rather than replacing the existing contents. This is useful for client-side interop with existing libraries that do their own DOM operations.
(…)
The “ignore” behaviour is frequently used when you need to integrate with another JS library.

In practical terms, we only need to add a phx-update="ignore" to the map container, to inform LiveView that the contents of that container are controlled by us.
You should now see the following result: 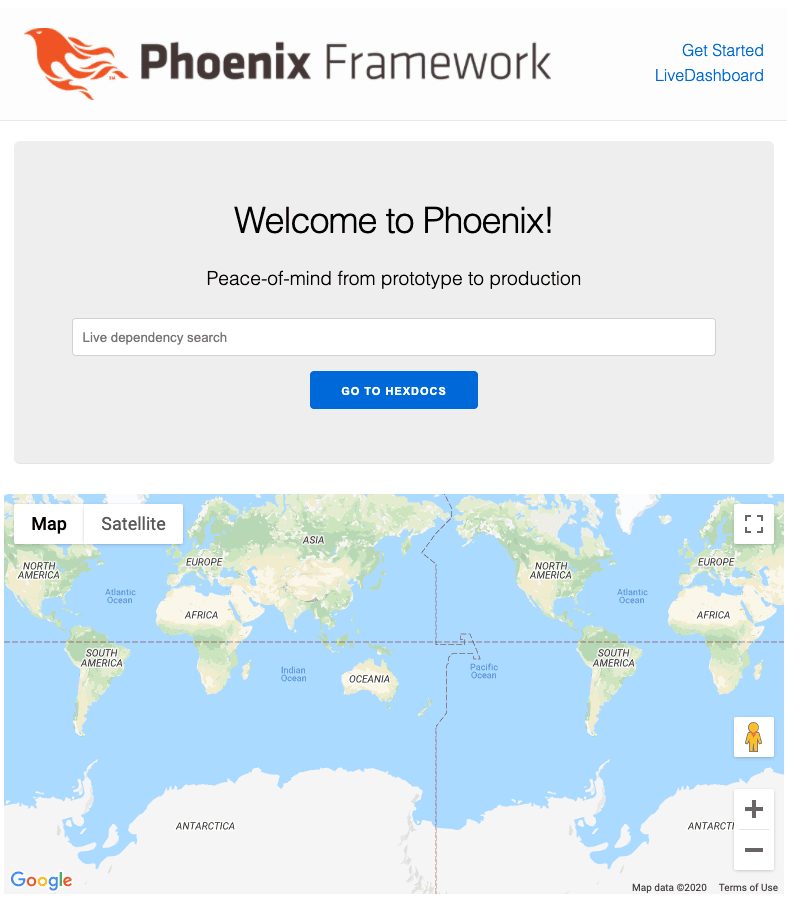 Only the last step is missing: sightings need to show up as soon as users report them.

In order to simulate a sighting being reported by a user, stored in the database and then broadcasted to other users, we added a button to randomly generate one. This button sends an event to the server as if a user actually reported a sighting. The LiveView then takes care of informing the browser that we have a new sighting.

To sum up the important parts, what we did was:

We are making use of the newly added handleEvent / pushEvent feature of hooks. This method is available since LiveView version 0.14:

The hook can push events to the LiveView by using the pushEvent function and receive a reply from the server via a {:reply, map, socket} return value. The reply payload will be passed to the optional pushEvent response callback.
Communication with the hook from the server can be done by reading data attributes on the hook element, or by using push_event on the server and handleEvent on the client.

d.2) Use the javascript hook on the map markup

In order to use / attach the newly created hook we just had to do the following:

As soon as the element is mounted and the LiveView Genserver pushes an event with the name new_sighting , the handleEvent callback is triggered and a map marker is added.

d.3) Update the LiveView Genserver to push the events / sightings

The server part that actually receives orders to create a random sighting, via an event sent by a phx-click=”add_random_sighting” on a button for the sake of simulation, and pushes the event to the browser’s socket:

If you apply all the changes and run the code you should now be able to randomly create markers on your map.

We had to cut some corners for the sake of keeping the article focused on topic.
There are a few points that we will probably address in another article:

How to display on the map the already stored sightings?

One might think “this seems very easy, on the first mount we could send / schedule a pushEvent !”.

The problem here is that the Google Map script might be rendered before or after we call that pushEvent. Meaning that if the script is loaded after, the handleEvent function that creates markers won’t have access to the map and as such it will fail and won’t render the markers!

We only handle sightings additions and we don’t even store them on a database nor broadcast it to all users.

How would one receive a new sighting, store it in a database and then broadcast this information to all users?

How to better structure the code?

In order to keep the article focused, once again we decided to go for the shortest solution and focus on the technology itself.

For instance, we are exposing the map object to the hook by adding it directly to the window. Please don’t do this in production!

Feel free to tackle the problems mentioned and do pull requests with your suggested solutions. We will be very happy to learn from you as well! 👩🏾‍🎓

We are very happy with the solutions and results we are achieving with LiveView. Please keep in mind that, as with any other tool, it has its own use cases and you should first understand the problem you have at hand before committing to it.

The biggest downside we still have with LiveView is the code structuring / organisation. We haven’t yet found a structure that we feel 100% confident with, so we are continuing to iterate until we get there.

The community is already working on solutions for this, and there are already libraries like surface that address this issue. Surface is on our “test / research / learning” list and we will certainly give it a try.

Also LiveView is still in an alpha stage. We have to keep upgrading the dependency quite often, as new releases with breaking changes are made available. The bright side of this is that it keeps getting better with every new release! 🥇

How we built open source Kahoot! alternative with Elixir and GraphQL

Elixir in the eyes of Node.js developer

Once suspended, coletiv will not be able to comment or publish posts until their suspension is removed.

Once unsuspended, coletiv will be able to comment and publish posts again.

Once unpublished, all posts by coletiv will become hidden and only accessible to themselves.

If coletiv is not suspended, they can still re-publish their posts from their dashboard.

Once unpublished, this post will become invisible to the public and only accessible to Coletiv.

Thanks for keeping DEV Community 👩‍💻👨‍💻 safe. Here is what you can do to flag coletiv:

Unflagging coletiv will restore default visibility to their posts.