When I can't fully explain something I try to go back and understand it better and often create notes. These are my notes from trying to further explain both JavaScript's execution context and lexical scope.

When your code initially runs, JavaScript creates what is called a Global Execution Context.

This context gives us access to two things right off the bat.

In the above image I have opened a web page that only has html. There is a single paragraph element.
Yet, in the console I can type in both this and window and see that they are available to me.
The other thing to note is that currently they are the same thing.

In JavaScript(JS), if we create a variable like var aNewVariable = "Hello world"

this variable will now be globally available.
Let's look at the variable in the console.

Inside my JS panel I add the new variable. 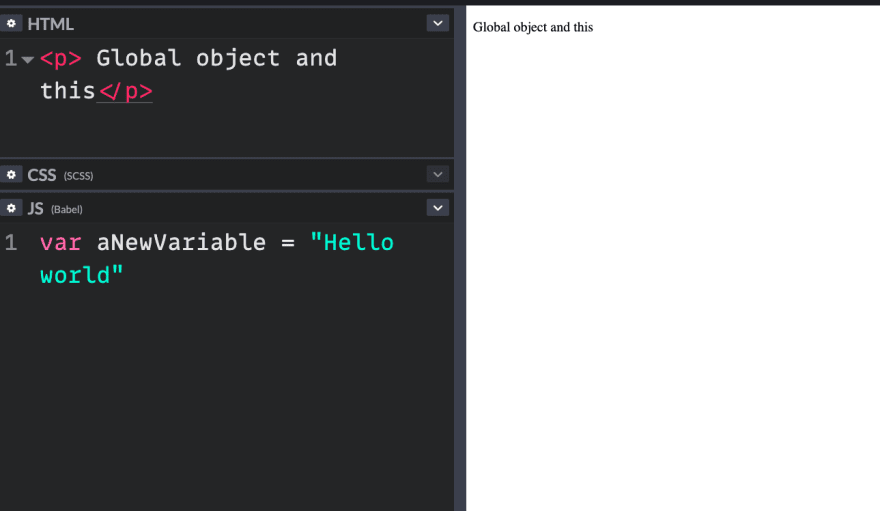 In the console I can call that variable by its name or with the global window object.
If we type in window and open that up we will also see our new variable.

We are now getting in to what is referred as the Lexical Environment or Lexical Scope.

Right now our variable is scoped to the global window object. If we created extra functions or variables those would also be scoped to our global object.

The lexical scope refers to where the code is written.

Let's look at an example of where a function would not be globally scoped.

This function is scoped to the myName() function and is not available on the global object.

myName() is available on the global window object and when we type in myName() we now can see our firstName function and what myName returns.

In this case firstName is executed inside our myName function and returns "Christina" .

More on function execution context in a bit.

"Hoisting is a JavaScript mechanism where variables and function declarations are moved to the top of their scope before code execution." - Mabishi Wakio

If you have a variable declared with var or a function declaration, JavaScript will hoist it or allocate memory for it after the first run through of your code.

What would you expect to see in the console?

In the console we get undefined and Colonel Brandon.

What is going on here?

When the JS engine had a first pass at our code it looked for all of the var variables and functions and allocated memory to them.

So in the case of perfectMatch when the code runs the first time it stores our variable perfectMatch as undefined. We do not actually define the variable until later on in the code but we do store the actual variable in memory.

Our function is also hoisted or stored in memory but because it is a complete function we can execute the code inside even if austenCharacter(); is called before the function is defined in our code.

Because it has been hoisted JavaScript has kept this function in memory and wherever we then place the function call austenCharacter(); no longer matters.

Another type of execution context happens within functions.

When a function is called a new execution context is created.

After looking at scope and hoisting a bit what do you think will happen when this code is run?

What we actually get is similar to what happened in our previous example.

First we get undefined and then we get

"Colonel Brandon is the perfect match".

When our function is called it is looking inside itself for its variables.

So within the function JavaScript looks for the var variables and then runs the console.logs.

It allocates perfectMatch to undefined initially so when we run the first
console.log(perfectMatch + " is the perfect match")

We then define it with var perfectMatch = "Colonel Brandon"

And can then see "Colonel Brandon is the perfect match" with the second console.log.

A representation of our code after hoisting:

How To Create Pop Up Login Form Using HTML and CSS