Each day I solve several coding challenges and puzzles from Codr's ranked mode. The goal is to reach genius rank, along the way I explain how I solve them. You do not need any programming background to get started, and you will learn a ton of new and interesting things as you go.

We finally made it to the superior rank, yay!

That's quite a lot of code, but at a first glance the bugs are pretty easy to fix.

The first one ☃️ should be the assignment operator =.
The second bug 🐼 is a variable name declaration, so we have to look for a variable that's being used but hasn't been declared yet: carry.
The final bug 💚 should be x because the y version below it looks exactly the same, so we can safely assume they should be similar. 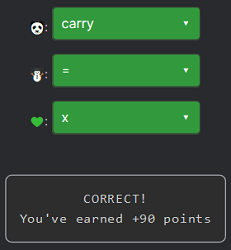 By solving these challenges you train yourself to be a better programmer. You'll learn newer and better ways of analyzing, debugging and improving code. As a result you'll be more productive and valuable in business. Get started and become a certified Codr today at https://nevolin.be/codr/