Opensea has officially announced that Solana will begin operations on April 1st.

To be honest, Solana has been increasing steadily over the last year. It was able to compete with ethereum's ecosystem for a brief period of time in terms of search.

The pricing and how creators are adapting to it can indicate how rapidly it has grown.

That is almost past 400% in less than two years. That is quite stunning, I must say.

Why do creators prefer Solana?

It has to be gas fees for sure.

We've witnessed a significant influx of artists and collectors to Solana in the last year as a result of the outrageous gas rates and overloaded network on etherum.

A transaction can be executed for pennies on the Solana blockchain compared to Ethereum blockchain, whereas the etherum network costs around $30.

Solana achieved this high transaction per second with the use of a hybrid protocol based on proof of stake and proof of history.

What is proof of history?

The blockchain's proof of history enables it to operate quickly while retaining security and decentralization.

As an analogy, if an illustration of pigmentation diffusion were scrambled, you would know how to restore order to the resulting images due to the rules of entropy as a function of time.

Proof of history hashes incoming events and transactions using a recursive verifiable delay function. Each event is uniquely hashed and counted through the data structure in real time.

This information serves as a cryptographic time stamp, providing us with a verifiable order of occurrences as a function of time.

Each note is equipped with a cryptographic clock that enables the network to agree on the timing and sequencing of events without relying on communication from other nodes.

In comparison to slower traditional blockchains, which are frequently throttled by various consensus processes,

Solana asserts that it has addressed scalability concerns while avoiding sharing overlaps. It claims to be capable of processing up to 65000 transactions per second, much above Ethereum's 15tps.

Another feature that has played a role in the spike of Solana is NFTs.

NFTs have aided in the expansion of the ecosystem and increased the value of Solana.

SolSea and solanart are the two largest Solana NFT marketplaces. However they can’t still compare to Opensea.

Opensea and Ethereum have been in this space for a longer period of time.

There is a market prediction being that Solana will reach $1000. Possible yes, but I'm rather certain it will not happen this year.

A $1000 Solana would have a market cap of approximately 325 billion dollars, which is roughly 20% less than Ethereum's current market size.

300 billion is certainly possible in a couple of years, although other than Bitcoin and Ethereum, no other project has achieved this level of market capitalization.

A bull run will be needed for that market cap to be achievable. Right now Solana is still more than 50% below its all-time high. 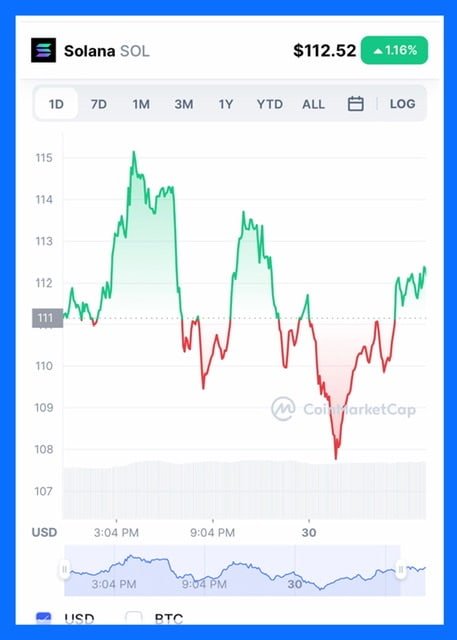 If you're unfamiliar with the term "on chain governance," it refers to a process for modifying the blockchain. Changes are suggested by developers and voted on by the community.

Now, a strong governance protocol should make judgments in the community's best interests, rather than those of a single entity, implying that the community determines changes and developments.

The issue with Solana is that it takes the number of tokens in a node into account, which means that if a node has a high concentration of Solana, it will have a greater voting power, which simply means that votes may be manipulated.

Solana claims to be unstoppable and decentralized.

However, the number of times their network has been down in the past months leaves dismay to say the least.

At one point, the troubles were caused by a DDoS attack, and another due to a bottleneck by failed transactions not being properly cashed out.

If it expects to kill the outperforming Ethereum, Solana has to do better.

Ethereum 2.0 will create significant difficulties not only for Solana, but also for the other layer 1 purchases.

So as much as Solana will be on OpenSea if it doesn’t work on these concerns, it will be a long ride still before it can reach the level of Bitcoin and Ethereum.

If ethereum entirely switches from proof of work to proof of stake, resolves the problem it’s having with scalability, eliminates excessive gas fees, and achieves 100, 000 transaction-per-second as they promise, then developers will just stick to Ethereum I bet and the shift we are seeing to Solana will subside.

I mean why would developers leave an already larger Ethereum’s user base to go to Solana?

How do you think Solana will mitigate the risks associated with it as it makes an entry into mthe world's largest NFT market?

Should I start an Open-Source on my profile or my organization profile?

Once suspended, codingcaro will not be able to comment or publish posts until their suspension is removed.

Once unsuspended, codingcaro will be able to comment and publish posts again.

Once unpublished, all posts by codingcaro will become hidden and only accessible to themselves.

If codingcaro is not suspended, they can still re-publish their posts from their dashboard.

Once unpublished, this post will become invisible to the public and only accessible to Caroline.