In December, JetBrains announced general availability of Space, an all-in-one solution that aims to replace an array of tools for the whole organization, from Slack to GitHub, Jira to CircleCI, and everything in between. It’s an ambitious project reminiscent of discontinued integrated environments that faded over time, such as Lotus Symphony – I know, I am dating myself – as single-purpose tools such as Word and Excel emerged as the preferred solution for knowledge workers.

The Microsoft Office Suite (a collection of single-purpose tools) never evolved into a single integrated environment and went on to dominate the office space. Google took a similar approach to the Google Suite. In software development, the most widely used tools today are VS Code (Microsoft), GitHub (Microsoft), Jira (Atlassian), and Slack (soon, Salesforce), as reported in the 2020 Stack Overflow survey. Still, many other companies have significant market share in their niche. JetBrains is well-entrenched as a provider of text editors or IDEs. GitLab offers a powerful code host along with DevOps tools. CircleCI is a market leader in Continuous Integration. And the list goes on. Even the mighty Microsoft has not been able to own every segment of the software development lifecycle, though it keeps trying.

According to a post in Techcrunch, the ultimate goal for Space is to provide a unified company-wide platform expanded to a wider range of creative teams, including designers, marketers, sales, accounting, and more. Seems like a tall order. The problem JetBrains is trying to address is that the array of tools “...leaves people switching tools and tabs, manually copying information, and generally losing time and creative flow” according to CEO Maxim Shafirov. At CodeStream we share his view that it’s a big problem development teams need to address, but our solution is quite different.

First, we are focused exclusively on developers, because they are drastically underserved when it comes to integrated solutions, and in particular, have unique needs when it comes to communication tools that are code aware. This point is fundamental when it comes to reducing context switching. Second, we aim to deliver a seamless solution by integrating the tools developers already use into the IDE of their choice, rather than adding yet another separate app into the mix. CodeStream supports 14 different IDEs, including all of JetBrains’ and Microsoft’s. It integrates with over a dozen issue trackers from Asana to Jira, to Azure DevOps, six code hosts including GitHub and GitLab, both cloud and on-prem, Slack, Microsoft Teams, and e-mail.

Here is a table that summarizes the main differences between JetBrains Space and CodeStream: 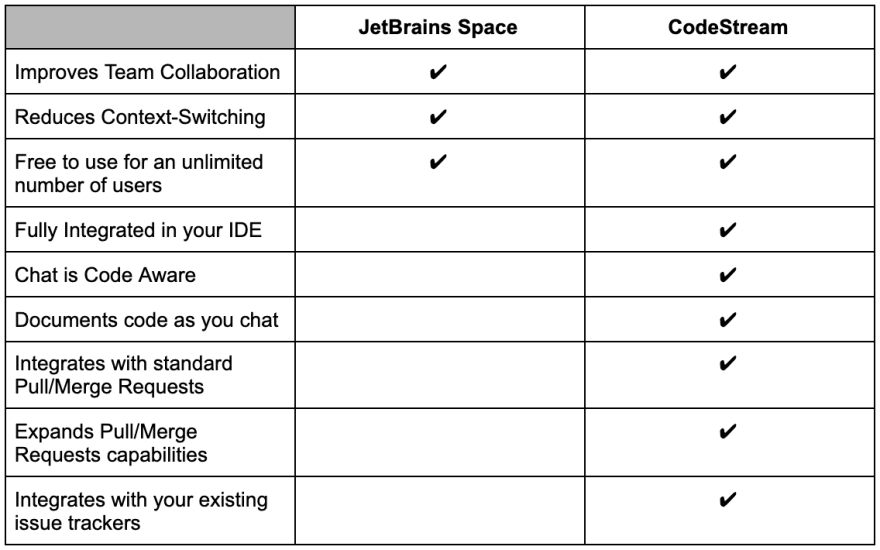 If you envision moving all of your collaboration to a single app that replaces your existing tools and workflows, then JetBrains Space looks like a good solution. If you would rather find a way to reduce context-switching, improve collaboration and boost productivity while still retaining the tools and workflows you are currently using, then CodeStream might be right for you.

Best E-Scooter Apps – Features And Cost To Develop An App