You are on the JS asteroid in the space. You see stars⭐️, planets🪐 and asteroids ☄️ floating in space 🌌.

to know the type of value we can use typeof operator.
typeof _value will give us the type of the value as string.

The types can be,
Primitive

In JS, primitives are immutable. For example

Even though string appears to be similar to an array, which is not a primitive we might have an intuition that we can mutate or change it. But in practice, we can't since the strings are primitive. This also applies to all the primitives.

Since the addition of a property is also a kind of mutation, this too is not allowed on Primitives.

Variables are like wires. We can connect the variables to values. In order to connect a variable wire to a value, we use assignment statements.

Now the variable wire x is connected to string value Shihab. The RHS of an assignment is always an expression.

Since we are asking JS, what is 'Hello '+world it is an expression which resolves to a value 'Hello World'.

The RHS of let x='Shihab' is also an expression, since it also resolves to a value 'Shihab'. We call it literlas since we write down the exact value.

This is because we pass the value of arr which is [10,20]. Since arrays are mutable, we were able to mutate the value. And the function cannot change the value arr was wired to, thus we get [30,20] when trying to print arr. 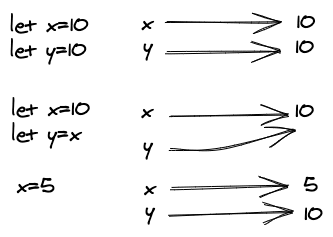 We should always think, values as having a precise count.

Undefined ----> Undefined [1]
null -----> null
Boolean -----> true or false [2]
Number ----> 18 quintillion [...]
BigInit ---> Use for arbitrary precision and no round-off. Mainly used in financial calculations.
String ---> A string for each conceivable string that exists in the universe. A string has properties but it is not as same as other objects. Since the string is primitive it is immutable.
Symbols ---> recently new
Objects ---> Each time it creates a brand new Object
Function ---> Each function expressions are distinct. Like any other things in JS, functions are expressions too. When it is called with () [Call expression] JS resolves it to the return value of it. If not, it resolves to function expression or body. Function are also Objects, but special objects. Whatever you can do with Objects can be done with functions too. But what makes function different is, the can be invoked.

In this we way, we have can better place and point our variables to values. In our model, there should be only two booleans, and one undefined and null. All the time, when a primitive is being referred, JS actually summons them. But in the case of Objects {} and functions (), it creates a brand new value for us. 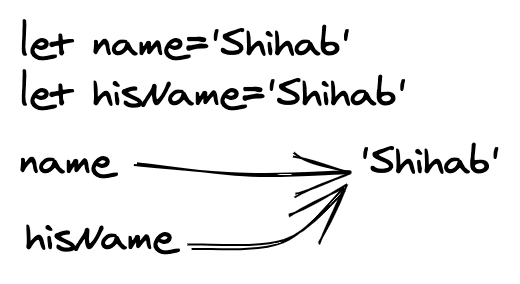 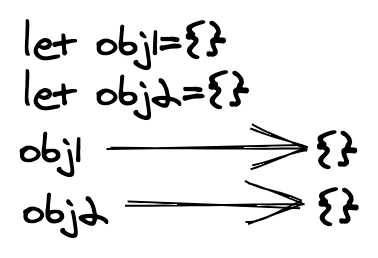 In JS there are mainly 3 types of equalities

Same value returns true is we are pointing to the same values.

It is same as Object.is() expect for

It just compares the sameness of values.

Properties are similar to variables. They also point to values, but they start from an Object and they belong to it.

Even though it seems like a single object is being created there are actually two distinct objects here. An object can never reside inside another object, even though it might seem nested from code.

Rules of reading a property

Properties will have names, which are strings basically. They must be unique within an object,i.e. an object cannot have two keys with the same name. The names are case sensitive too.

a. If it exists, answer with the value this property points to.

b. If it doesn’t exist, answer with the undefined value.

If a property is missing, we get an undefined. But it doesn't mean that we have that property on the object pointing to undefined. It is more like, we are asking JS for the value (expression) and it is replying us that it is not defined, undefined.

Assigning to a property

Suppose we have the following

Now we want to change john.

But we observe we could see sherlock.address.city has also changed to Malibu from London. This is because both sherlock.address and john.address pointed to the same Object.

So because of this, the mutation can be dangerous. It might unintentionally change the values at all the places where it is being referred.

In order to avoid mutation, we could have done the following: 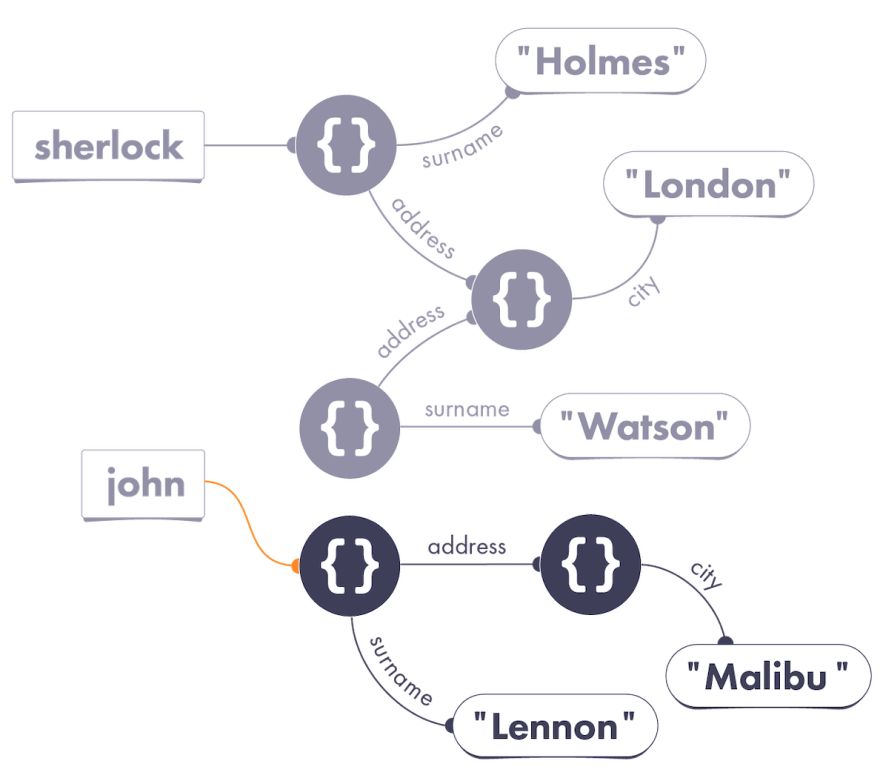 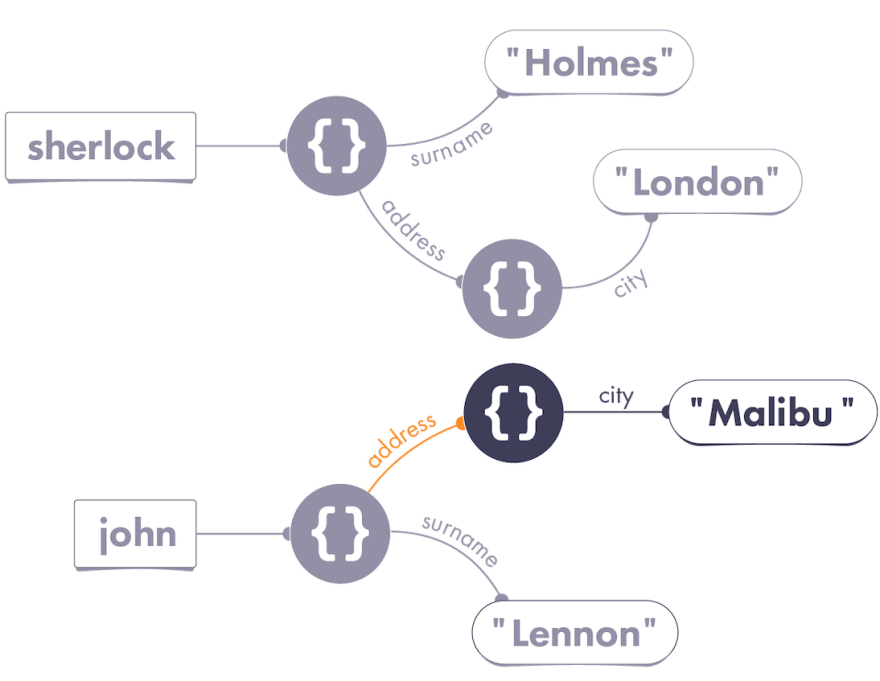 Is Mutation that Bad?

The mutation is not bad at all, but we should pay closer attention to it. The bliss with the mutation is, it helps us update or change a value realtime at multiple places. If think the other way, that is misery with it too.

Even though you declare an Object with const it will not presentation mutation to the Object. It will only prevent the reassignments. 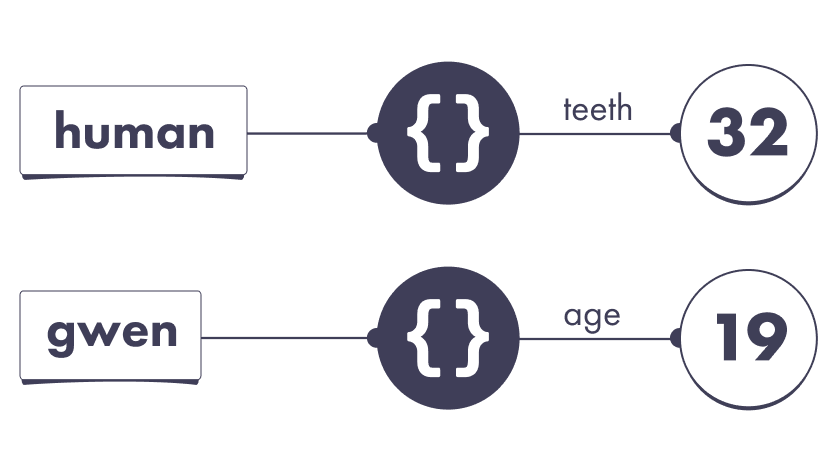 But we can access teeth property of human in gwen by,

With adding __proto__ we instruct JS, to continue searching for teeth in __proto__ too.

As you can see, so this is kind of a chain that is getting created when we as JS to look for a property on an Object. This is being referred to as prototype chain. 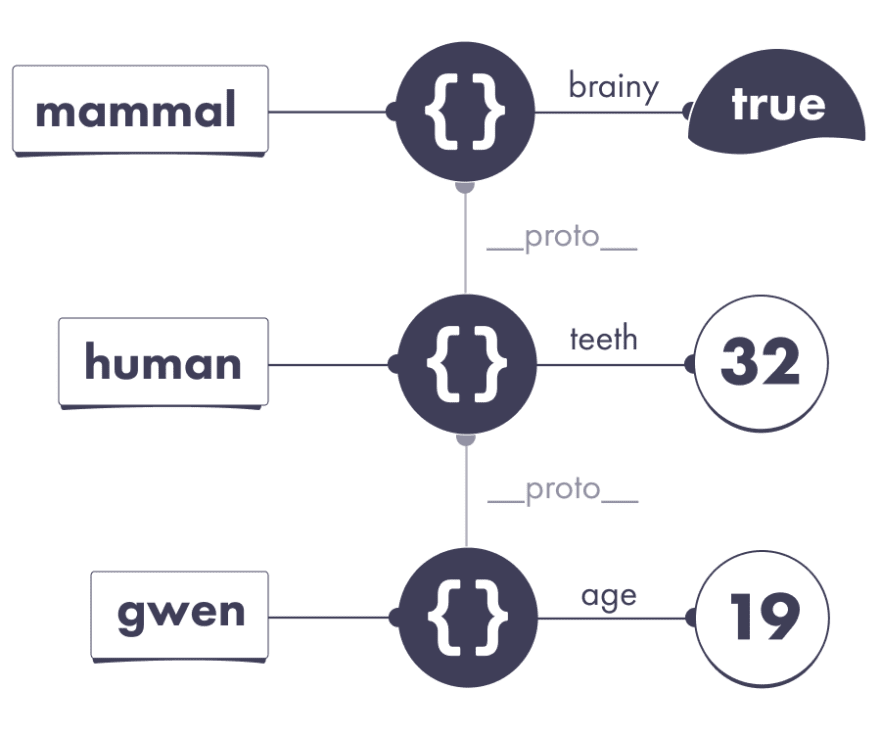 When an Object has the same property on it and as well as inside the __proto__, the own shadows the value on __proto__. This is called Shadowing. 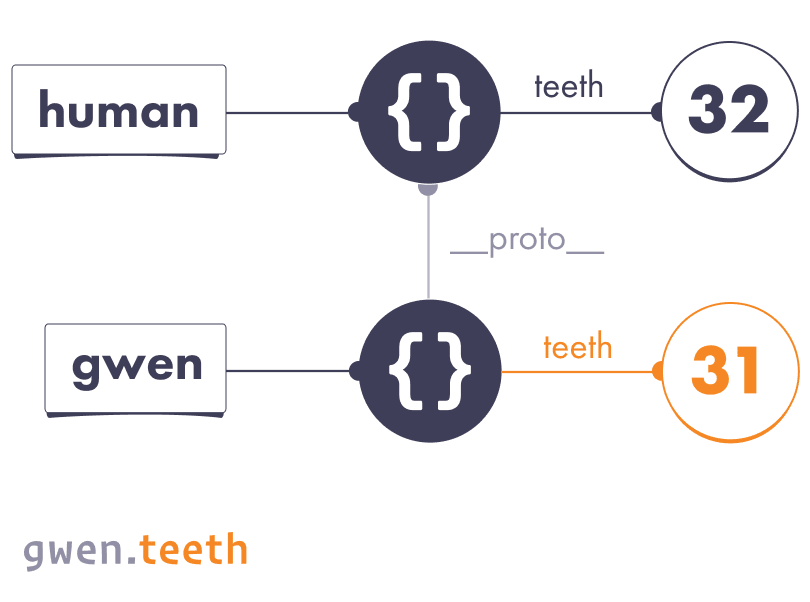 The property assignments directly happen on the Object and not on the __proto__. 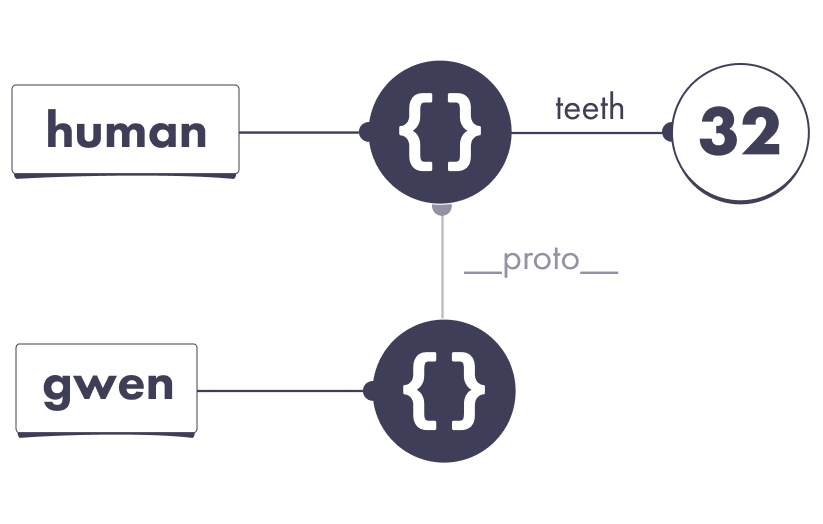 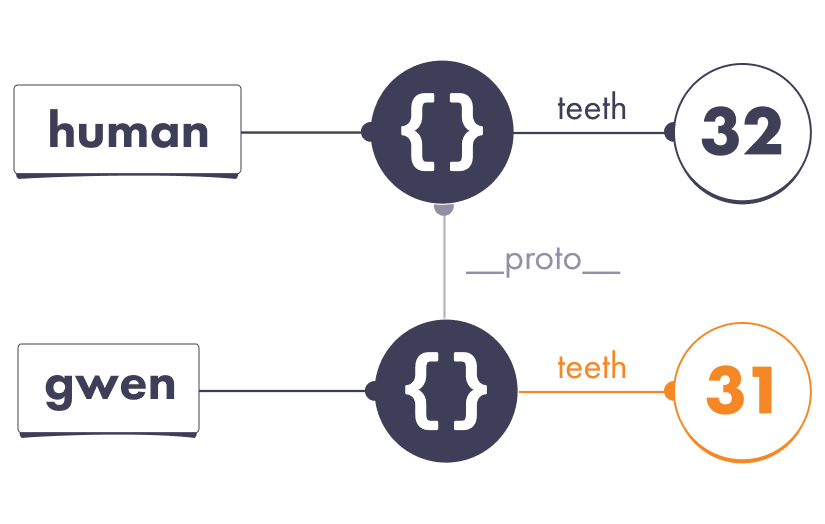 To check if the property belongs to an Object or its __proto__, we have a method called hasOwnProperty on Object.

If the prop is a property on ObjectName, it will return true if not false.

When we create a new Object, there is a __proto__ that gets added by default. It is the prototype of the Object. 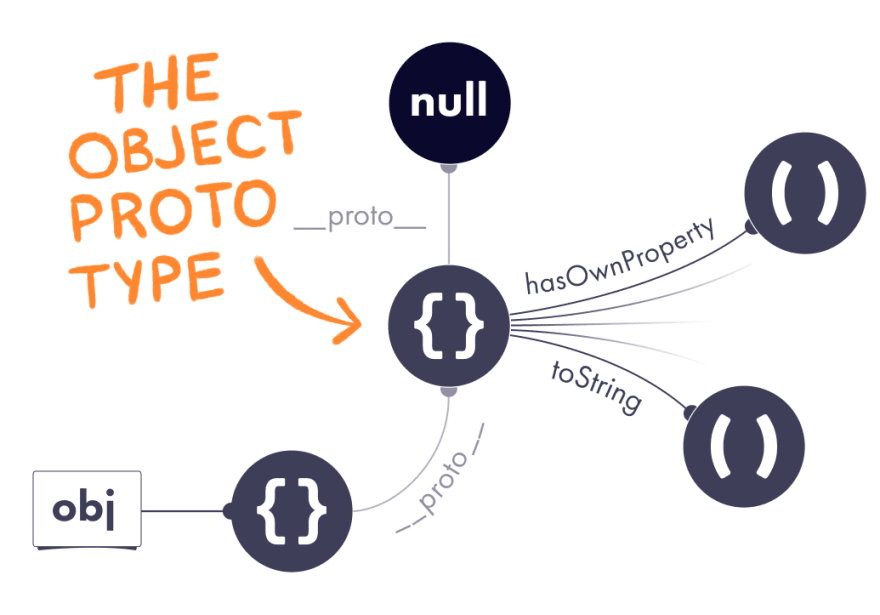 To terminate the prototype chain of any Object we can just assign null to its __proto__.

All the in-built methods and properties of Objects, Arrays and Strings are defined in the __proto__ of their base. In this way, these get shared among all the values, that are being created out of it. 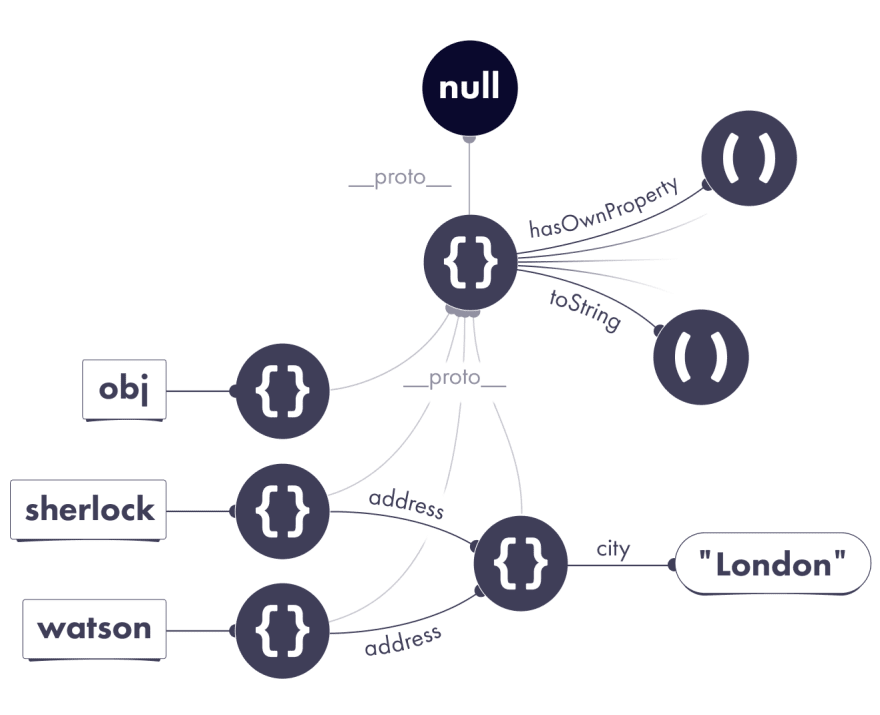 But this practice of sharing is highly discouraged. 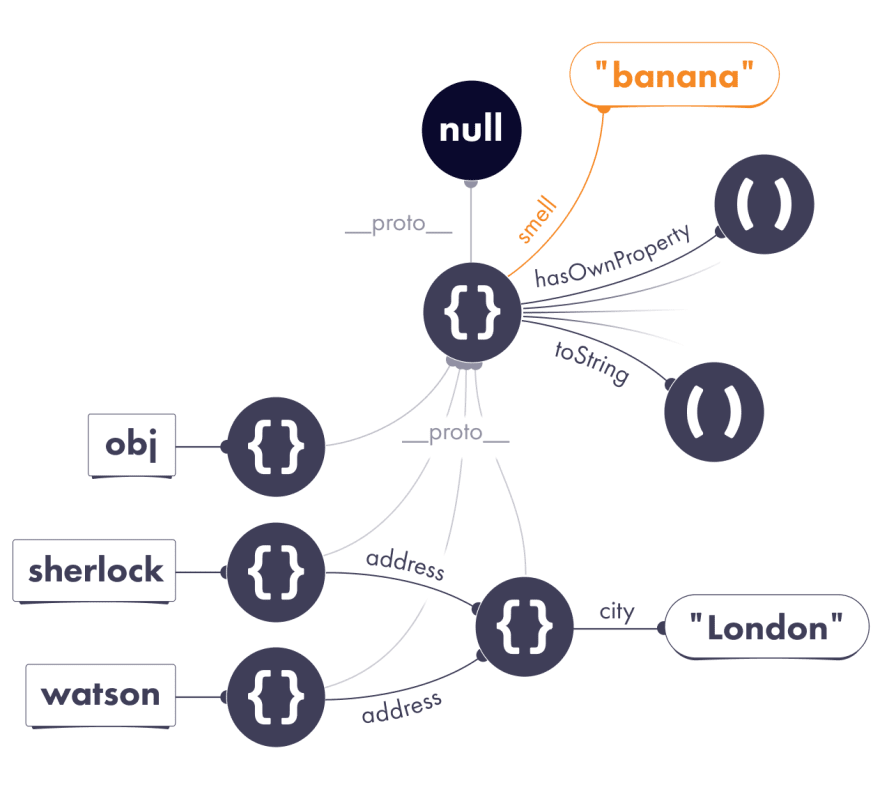 But the sharing of methods and properties via the prototype chain is the base of classes and all other features. But the direct usage of polluting prototype is not recommended.

You might be wondering: what in the world is the prototype property?

The story around this is confusing. Before JavaScript added classes, it was common to write them as functions that produce objects, for example:

You’d want all donuts to share a prototype with some shared methods. However, manually adding __proto__ to every object looks gross:

As a shortcut, adding .prototype on the function itself and adding new before your function calls would automatically attach the __proto__:

Now this pattern has mostly fallen into obscurity, but you can still see prototype property on the built-in functions and even on classes. To conclude, a function’s prototype specifies the __proto__ of the objects created by calling that function with a new keyword.

Analysis of Building a Web Component