After two weeks of moving CodingCatDev from Kinsta to WPEngine to Flywheel, and AWS we are back on Kinsta.

I am still not sure if we will need the Business 1 Plan but looking at the options and the fact I was hosting other sites I decided to consolidate. I then moved one site with the free migration offering and another old, simple site I moved myself.

The great thing is that Kinsta Business also has 3 Premium migration credits as well, which will allow me to bring on two additional hosting sites. I have a couple in the pipeline so hopefully that will come soon enough and then we can push towards the next tier.

One of the biggest reasons that I chose Business 1 was that it was the first plan that allows for 4 php workers, which I think is the reason for such great performance while running our new BuddyBoss based LearnDash site.

Initially I thought I could get better performance at a lower cost and I thought I might utilize Genesis Framework which is included to see some real gains on the site. What I found was without a tailored LearnDash and BBPress explicit theme this became very difficult. While I liked what I was experiencing I wasn’t getting the gains that I had hoped for and I found their admin interface difficult to use.

After digging in some more I read that WP Engine acquired Flywheel and that they were offering some amazing pricing for their tiny plan. When I first looked into this I thought this would be great to do some initial testing. Flywheel has really competitive base plans that I think would work really well for a static WordPress site that just needs some solid SEO and fast CDN, but CodingCatDev is a very dynamic site that needs a lot of CPU, memory and PHP workers.

What irritated me the most about the Flywheel is that the seemed to hide aspects of their infrastructure from me, they placed arbitrary limits on something that should be so simple. As you can see here they too are hosted on Google Cloud Platform and based on this diagram I was given should have a compelling and solid solution. Unfortunately after requesting logs to be emailed to myself for the 10th time I ultimately gave up on this hosting dream. 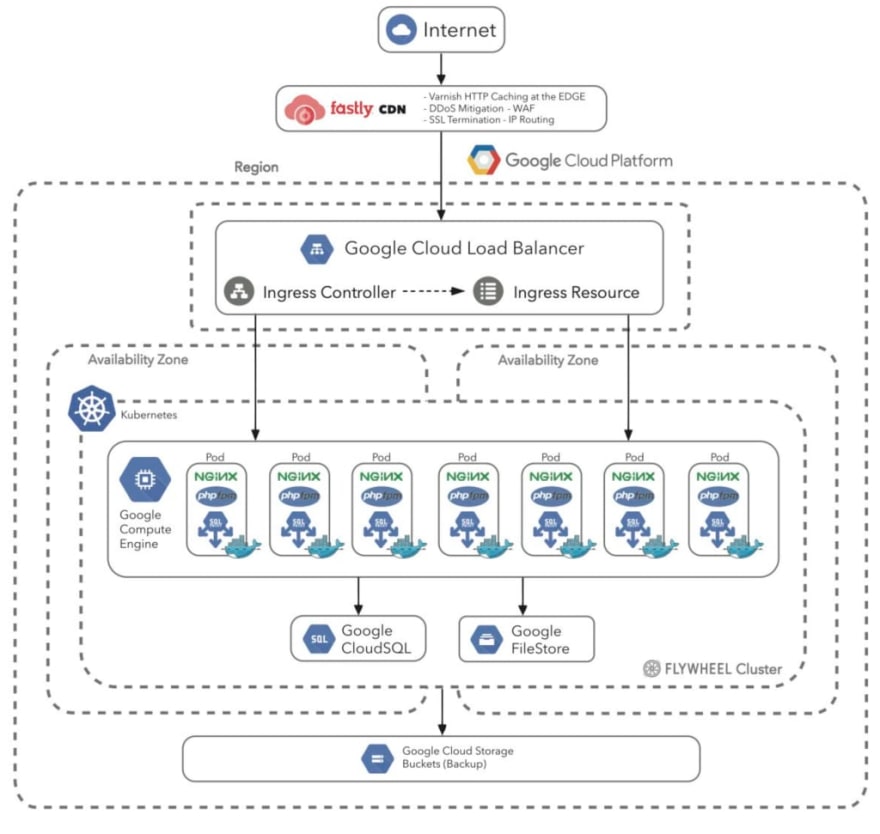 The entire goal of running CodingCatDev on WordPress was to simplify all of this for other Authors (Instructors) to start coming to the site and allowing them to build their own Courses to sell. So I left AWS pretty far down my list as I don’t want to spend my time with maintaining all of this Infrastructure. I already have a day job that keeps me busy enough with AWS Amplify and serverless framework.

However, after I read this Dev blog on Best Practices for Running WordPress on AWS using CDK. I had to at least give it a try and see how much it would cost each month. Mike Ng has a pretty awesome solution laid out using AWS CDK and provides a Github repo.

Although I think this is an amazing solution and I think if I spent enough time on it, this would be a great turnkey solution for any client of mine. I hit a roadblock early on with CloudFormation and decided this is why I want managed hosting digging through the 187 resource this creates and making sure I have Route 53 and all the security setup correctly is still a waste of our time, again we need content and Authors!

Here is what I now know, if you have a solution that is working for a decent price, stick with it and it will pay off in the end! This in no way shape or form makes any of the other solutions bad, just not the right one for CodingCatDev.

How to install an SSL certificate on a Bitnami stack hosted on Amazon Lightsail?

Alex Patterson
Hi I am the Founder of CodingCat.dev, a web development community. I love all things Web! I am also a Developer Advocate at Builder.io
1.11 - Moving from WordPress to Jamstack
#podcast #webdev #jamstack #wordpress
Wordpress Performance Plea
#help #wordpress #performance #learndash
Excited for move to WordPress
#learndash #wordpress #cloudinary

Once suspended, codercatdev will not be able to comment or publish posts until their suspension is removed.

Once unsuspended, codercatdev will be able to comment and publish posts again.

Once unpublished, all posts by codercatdev will become hidden and only accessible to themselves.

If codercatdev is not suspended, they can still re-publish their posts from their dashboard.

Thanks for keeping DEV Community safe. Here is what you can do to flag codercatdev:

Unflagging codercatdev will restore default visibility to their posts.