Blockchain is the backbone of cryptocurrency which redefines the way we communicate over the internet. It creates a decentralized, token-based system where contributors become the owner of the asset rather than guests.

Smart Contracts play a vital role in Blockchain popularity as it makes transactions safer and organized.

Ethereum is an open-source platform that allows anyone to build and run dapps on a blockchain. It allows users to create Smart Contracts, which can be deployed and executed by the Ethereum Virtual Machine (EVM). Solidity is the language used for creating these smart contracts.

In this article, we will learn to create a smart contract using Solidity.

A blockchain is an auditable and irreversible database where data can only be added. In a blockchain, the data can be added as blocks in which each block has the address of the previous one, hence called the blockchain.

Ethereum is an open-source decentralized platform built on blockchain and is used to run our smart contracts. It is not only a cryptocurrency but also a sophisticated application that executes the smart contracts on the blockchain so as to avoid the chances of any fraud attempts in the transactions. We use Ethereum Virtual Machine (EVM) as the runtime for running the smart contracts.

Smart contracts are program snippets compiled and executed by the EVM and stored on a blockchain. It is executed automatically when the predefined conditions are met. It helps you to do safe transactions without the involvement of a third party. The good part of smart contract-based transactions is that these transactions are irreversible but traceable.

Solidity is the most widely used programming language to create and write smart contracts even though there are other languages such as Mutan, Serpent and LLL available in the market.

The Ethereum Virtual Machine is a computing engine used for running smart contracts. It acts as a software platform for building and deploying decentralized apps. 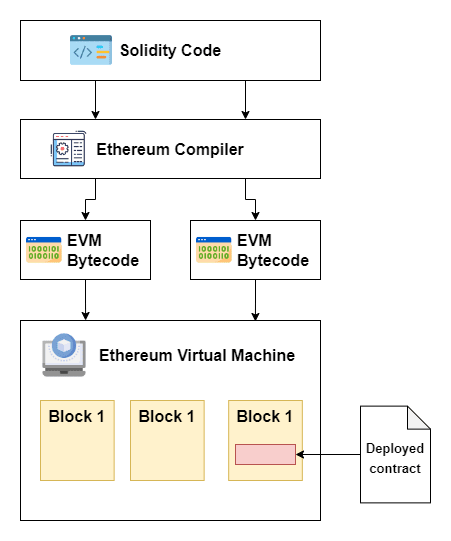 Let's have a look into the working of an EVM.

The smart contract (Solidity code) is compiled by the Ethereum compiler and creates an EVM bytecode. These bytecodes are the intermediate codes executed by the EVM. It creates different blocks after bytecode execution. Finally, the deployed contracts are mapped to the respective blocks.

We can find multiple standalone implementations of EVM such as

Solidity is the commonly used high-level object-oriented language for implementing smart contracts. It is a curly-bracket based and ECMAScript-like syntax language having almost similar syntax to C++, JavaScript and Python. It is statically typed and supports complex member variables for contracts. With Solidity, you can create contracts for applications such as voting, crowdfunding, and multi-signature wallets.

You can execute a Smart contract in two ways

Let's start with the software requirements. 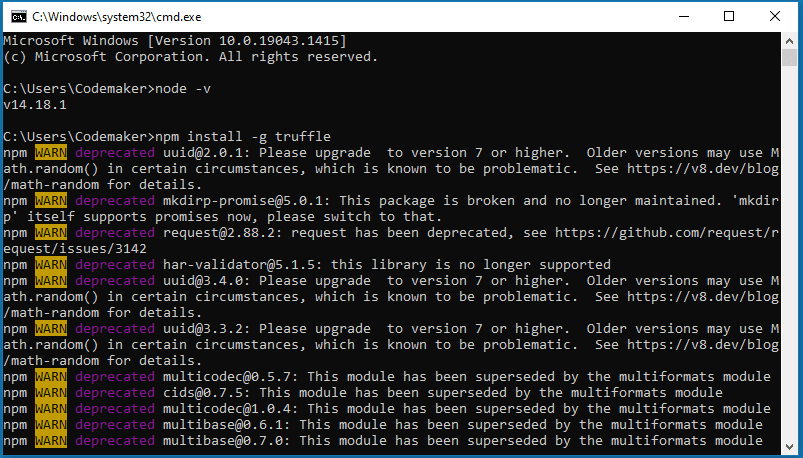 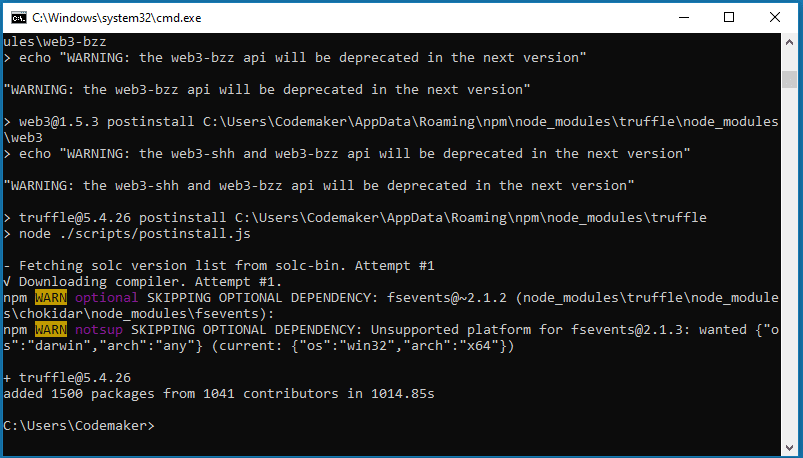 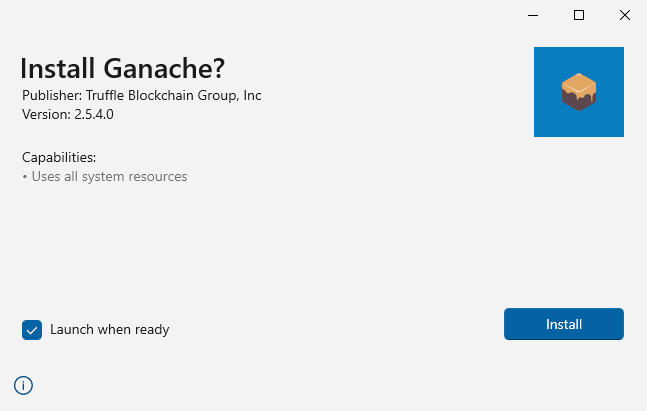 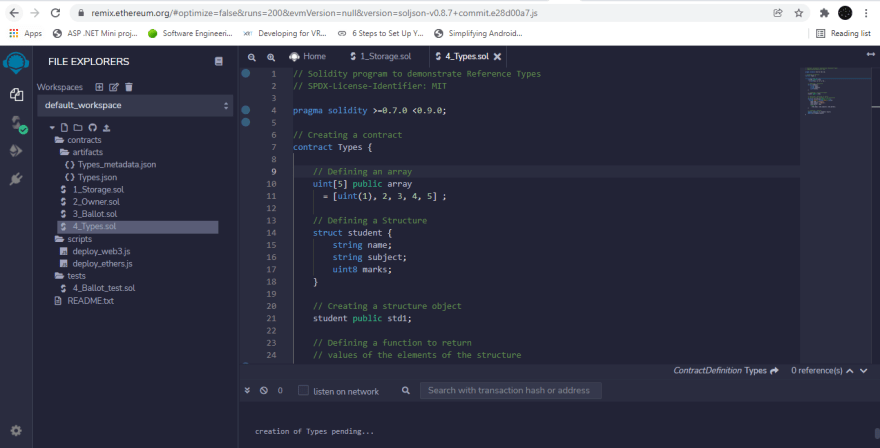 Now that all the tools are installed, let us explore some of the fundamental concepts of Solidity.

Solidity is a statically typed language, hence we have to specify the type of each variable on their declaration. Like other languages, Solidity has value types and reference types.

Value types - Value type variables store their own data. These are the basic data types provided by solidity. Value type data in the solidity are listed below:

Reference Types - Reference type variables store the location of the data. They don't share the data directly. The reference types in solidity are listed below:

A function is a group of reusable codes that can be used anywhere in your application. We can define a function using the function keyword, a unique function name, a list of parameters, and a block of statements surrounded by curly braces. It can be specified as private, internal, external or public (default).

Modifier allows the control of the behavior of a function. They can be used in a variety of scenarios. For instance, checking who has access to a function before executing that function.

If the condition of the modifier is met while calling the function, the function body is inserted where the special symbol "_;" appears in the modifier definition. Then the code is executed else an exception is thrown.

Constructor is an optional function which is automatically executed at the time of contract creation. We can define a constructor using the constructor keyword. It can be public or internal. The contract will create a default constructor if there is no constructor specified.

An event stores arguments passed in the transaction logs. It is helpful to get the current state of the contract while calling the function. It can be used to notify the application regarding the changes made in the contracts.

Solidity provides various functions for error handling. However, the state of the blockchain is reverted back to its original state when an error occurs. Also, there is an option to prevent unauthorized code access. Following are some of the important methods used in error handling.

The fundamentals of Solidity are covered in the above sessions. Let's try to create and deploy our first smart contract.
Let's begin with the project folder creation. Subsequently, let's initialize the project with Truffle by the following command. 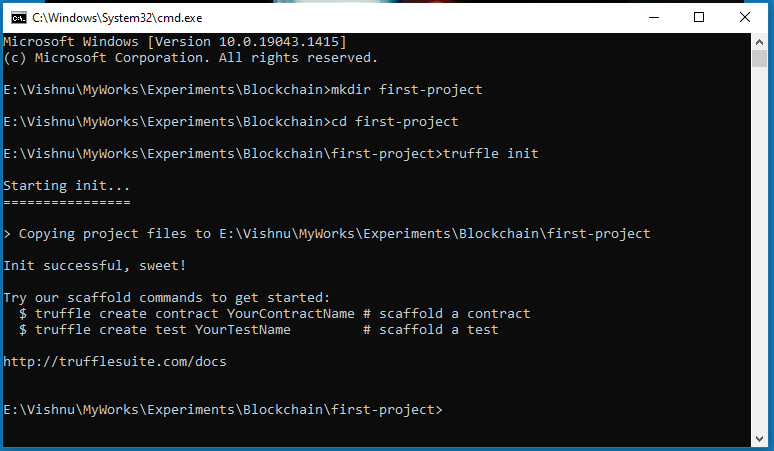 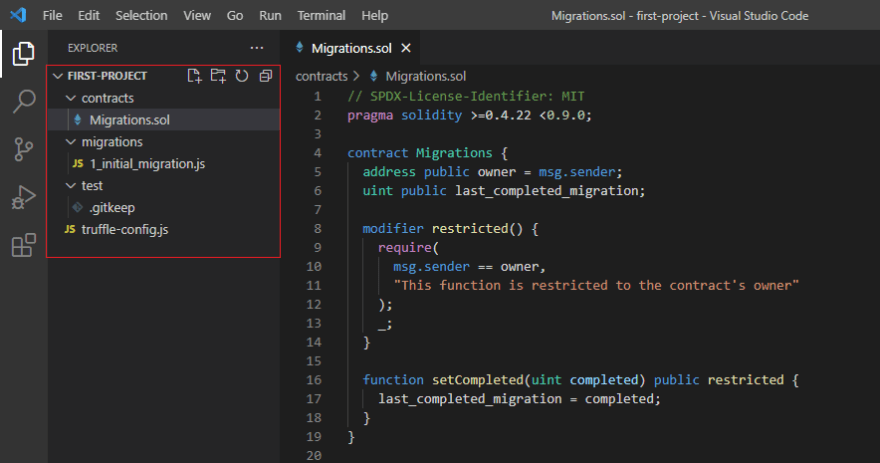 Let's have a look at the project structure.

Now, we can create a HelloWorld.sol smart contract. In this example, the constructor takes a string parameter and assigns it to a global variable name. The name can be changed using the function changeName(string) which acts as a setter, while getName() acts as a getter.
Create a file named 1_HelloWorld.sol and place it under the contracts folder then add the following code to it.

Create a new migration file with a prefix greater than 1 ( 2_hello_migartion.js) inside the migration folder to deploy the HelloWorld.sol contract.

The artifacts.require() notifies the truffle which contract you want to interact with and deployer.deploy() function refers to the parameter we need to pass to the constructor. 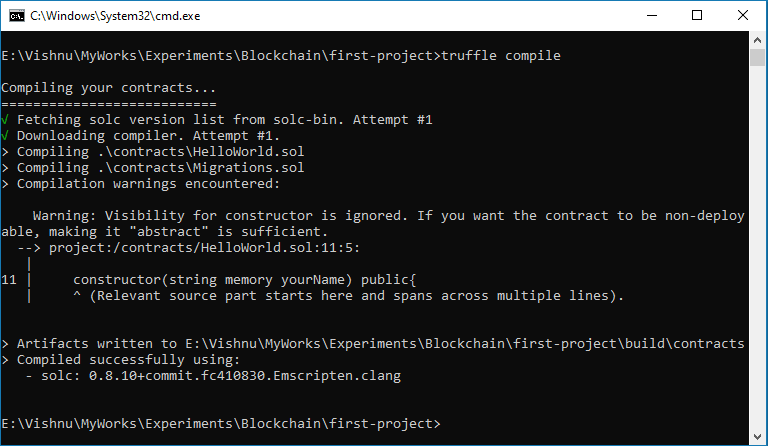 We can see a build folder inside the project folder if the compilation is successful. We have to use Turffle and Ganache to deploy and test the contracts.

Let's begin with Ganache. Open Ganache IDE, and select "QuickStart" from the window.

Next, go to truffle-config.js and modify the network details by uncommenting the development section.

Make sure the RPC server port from Ganache is mapped in the networks.port value.

After successful deployment, you will get the contract details such as the contract address and the block information. 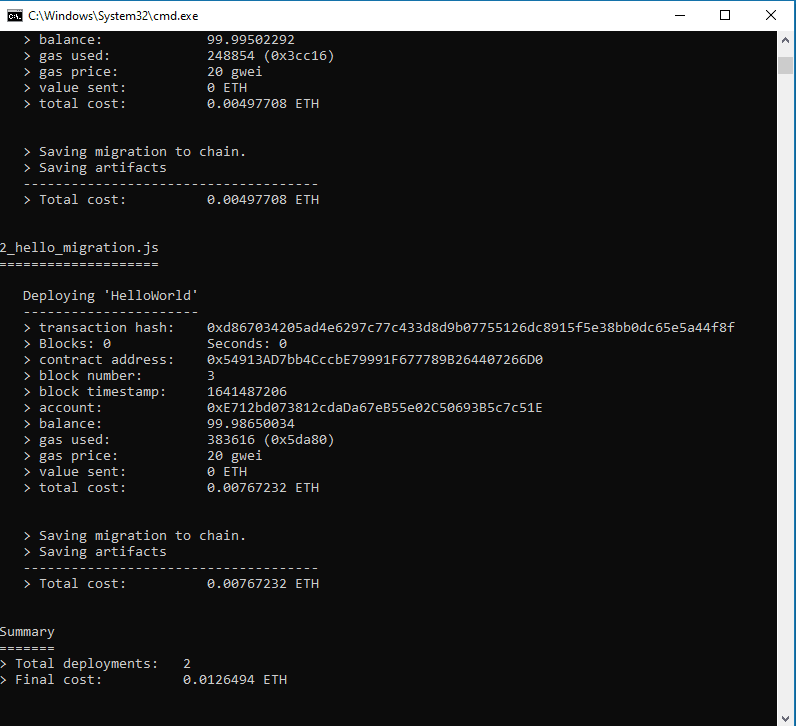 Create a test filetest.js with .js prefix in the test folder and add the following code.

The before() function executes in advance of the execution of the tests such that we can initialize the contract instance. The call() function is used when the method does not modify the state variables of the contract. We used call() in the getName() function else it would have returned the transaction receipt.

We have defined two test cases here. The first test verifies parameters in the contructor, gets the value using getter method and uses assert to check the equality. The second test tries to change the name using changeName(). 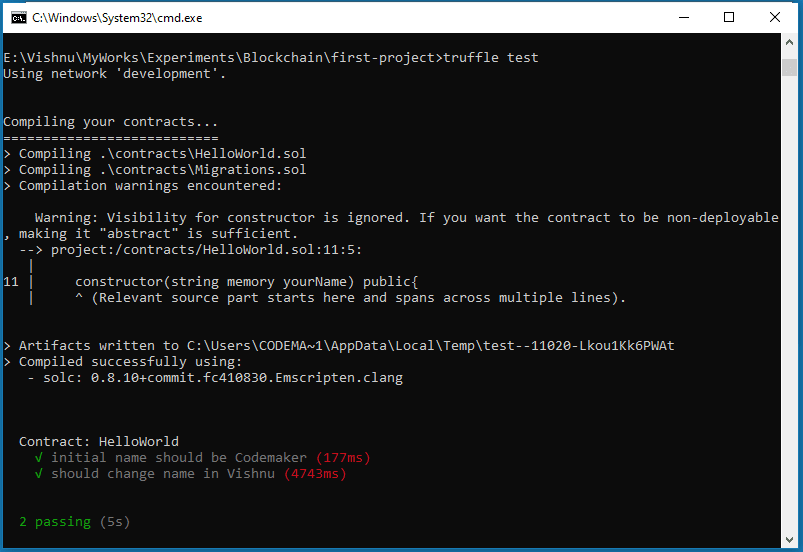 There you have it! Your own smart contract deployed on the blockchain :) 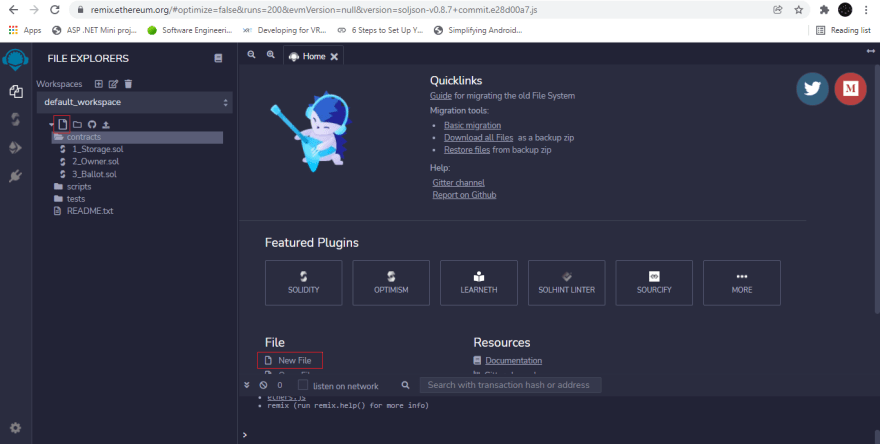 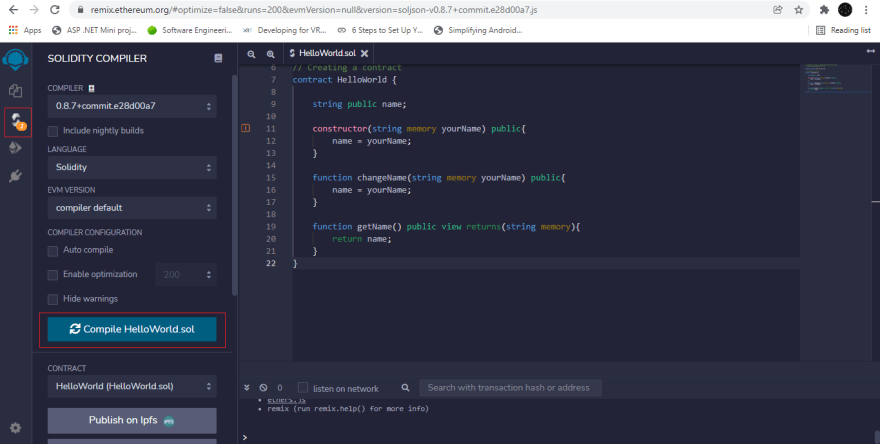 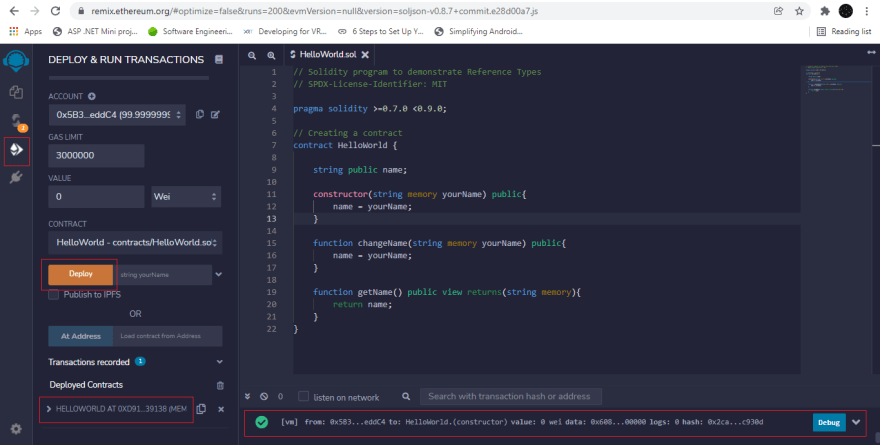 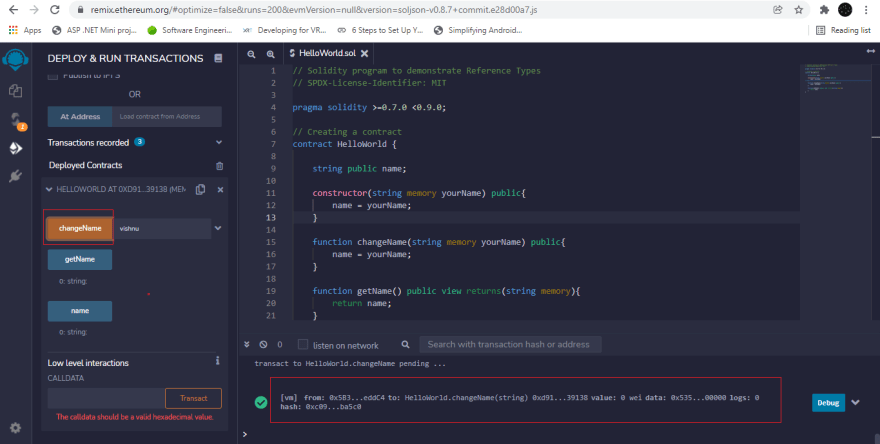 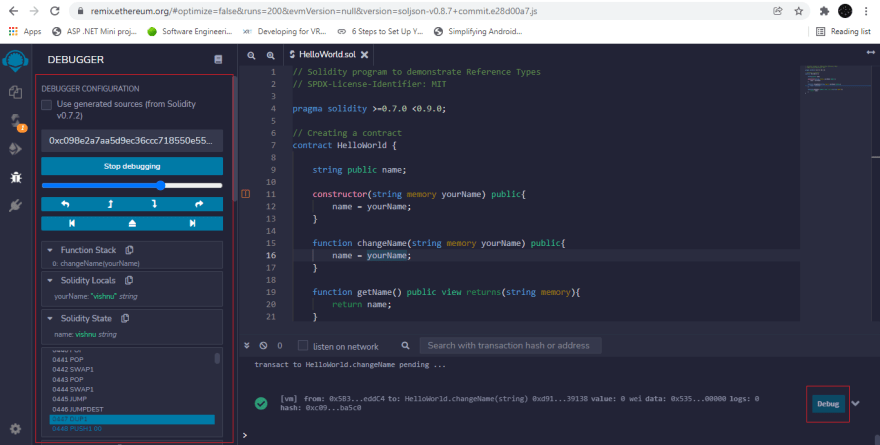 The full source code of this tutorial is available on https://github.com/codemaker2015/solidity-smart-contract-examples

Here are some useful links,

What is the hype about NFTs?

Signatures as Authentication in Web3

Change to Test Network on Metamask