Termux is an app which provides a Unix/Linux-like environment on your Android device. But getting an familiar IDE like Visual Studio Code previous required a number of steps. Recently this seems to have been streamlined by the various package maintainers and now can be done in fewer steps.

First is that we will be installing the the open source version of Visual Studio Code (VS Code), called code-server.

code-server is an Electron app and needs support from nodejs environment.

In Termux run the following commands:

As they are needed for building native extensions.

And finally install code-server itself.

Note: Installing code-server will take a while

code-server is now installed and will be the back end server to your front end client, a Chromium browser, like Chrome for Android or Microsoft Edge.

Now from the command line run code-server or have it run in the background by adding an ampersand like code-server &.

You'll get some output logs about where the password is located.

In my case I used cat ~/.config/code-server/config.yaml to find out what was configured.

Open up a browser, as I was using Samsung DeX as a desktop, I used Samsung Internet, connected to 127.0.0.1:8080 and entered the password. 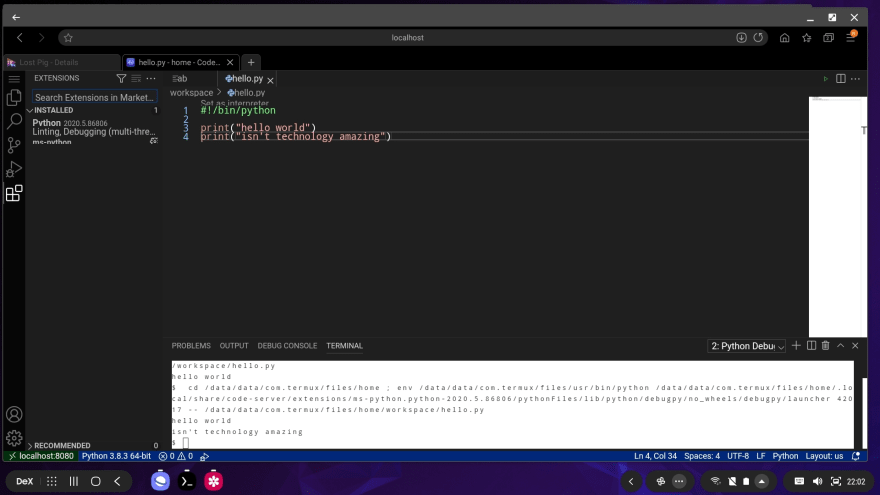 Once connected, you can install plugins. As you can see, the MS Python plugin appears to work.

Step 2: Now update all of the packages (check above list)

Step 3: In order to force a rebuild, use yarn to remove code-server

Step 4: And add/install code-server (yes it will take a while)

Getting Search to work

Thanks to yozman on this issue ticket

And add to the code-server directory

which is in my setup can be reached by:

a softlink to the rg binary:

How to draw text on Canvas using drawText API in Jetpack Compose?

Once suspended, codeledger will not be able to comment or publish posts until their suspension is removed.

Once unsuspended, codeledger will be able to comment and publish posts again.

Once unpublished, all posts by codeledger will become hidden and only accessible to themselves.

If codeledger is not suspended, they can still re-publish their posts from their dashboard.

Once unpublished, this post will become invisible to the public and only accessible to Morrison Chang.

Thanks for keeping DEV Community 👩‍💻👨‍💻 safe. Here is what you can do to flag codeledger:

Unflagging codeledger will restore default visibility to their posts.