One of the foundations of GitOps is the usage of Git as the source of truth for the whole system. While most people are familiar with the practice of storing the application source code in version control, GitOps dictates that you should also store all the other parts of your application, such as configuration, kubernetes manifests, db scripts, cluster definitions, etc.

But what about secrets? How can you use secrets with GitOps? This has been one of the most popular questions from teams that adopt GitOps.

The truth is that there is no single accepted practice on how secrets are managed with GitOps. If you already have a solid solution in place such as HashiCorp vault, then it would make sense to use that even though technically it is against GitOps.

If you are starting from scratch on a new project, there are ways to store secrets in Git so that you can manage them using GitOps principles as well. It goes without saying that you should never ever commit raw secrets in Git.

All solutions that handle secrets using Git are storing them in an encrypted form. This means that you can get the best of both worlds. Secrets can be managed with GitOps, and they can also be placed in a secure manner in any Git repository (even public repositories).

In the context of this article we will talk about two kinds of secrets, the built-in Kubernetes secrets (present in every Kubernetes cluster) and the sealed secrets as introduced by the Bitnami Sealed secrets controller.

Before we talk about sealed secrets, let’s talk about normal/plain secrets first. Kubernetes includes a native secret resource that you can use in your application. By default, these secrets are not encrypted in any way and the base64 encoding used should be never seen as a security feature. While there are ways to encrypt the Kubernetes secrets within the cluster itself, we are more interested in encrypting them outside the cluster, so that we can store them externally in Git as required by one the founding principles of GitOps (everything stored in Git).

Using Kubernetes application secrets is straightforward. You can use the same mechanisms as configmaps, namely mounting them as files on your application or passing them as environment variables. 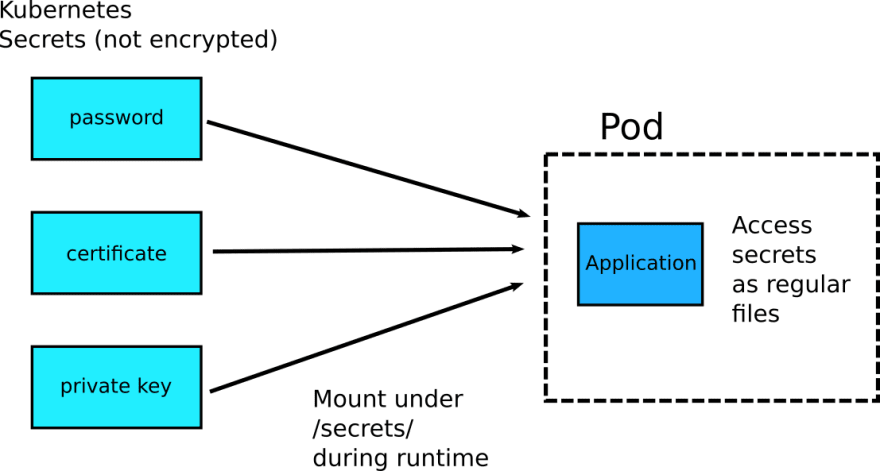 An example application with secrets

As a running example, we will use a simple application found at https://github.com/codefresh-contrib/gitops-secrets-sample-app. This is a web application that reads several dummy secrets and displays them (without actually using them in any way).

We have chosen to make the application read the secrets as files (from /secrets/) instead of using environment variables. Here are the paths that are used:

It is important to note that the application is very simple. It only reads secrets from these paths. It doesn’t know anything about Kubernetes, secret resources, volume mounts, or anything else. You could run it on a Docker container (outside of Kubernetes), and if the correct paths have secret files, it would just work.

For illustration purposes, the application loads different kinds of secrets such as username/password, public/private key, and certificate. We will handle all of them in a similar way.

Installing the controller is straightforward:

Once installed, the controller creates two keys on its own:

It should be clear that the controller does not come in direct contact with your application. It converts sealed secrets to Kubernetes secrets, and afterwards it is up to your application how to use them. The application does not even know that its secrets were originally encrypted in Git.

We have seen how the controller decrypts secrets. But how do we encrypt secrets in the first place? The controller comes with the associated kubeseal executable that is created for this purpose.

It is a single binary, so you can install it by copying it to your favorite directory (probably in your PATH variable)

Kubeseal does the opposite operation from the controller. It takes an existing Kubernetes secret and encrypts it. Kubeseal requests the public key that was created during the installation process from the cluster and encrypts all secrets with that key.

If you want to use the same secret for different clusters, you need to encrypt it for each cluster individually.

To use kubeseal, just take any existing secret in yaml or json format and encrypt it:

This creates a SealedSecret which is a custom Kubernetes resource specific to the controller. This file is safe to commit in Git or store in another external system.
You can then apply the secret on the cluster

The secret is now part of the cluster and will be decrypted by the controller when an application needs it.

Here is the full diagram of encryption/decryption: 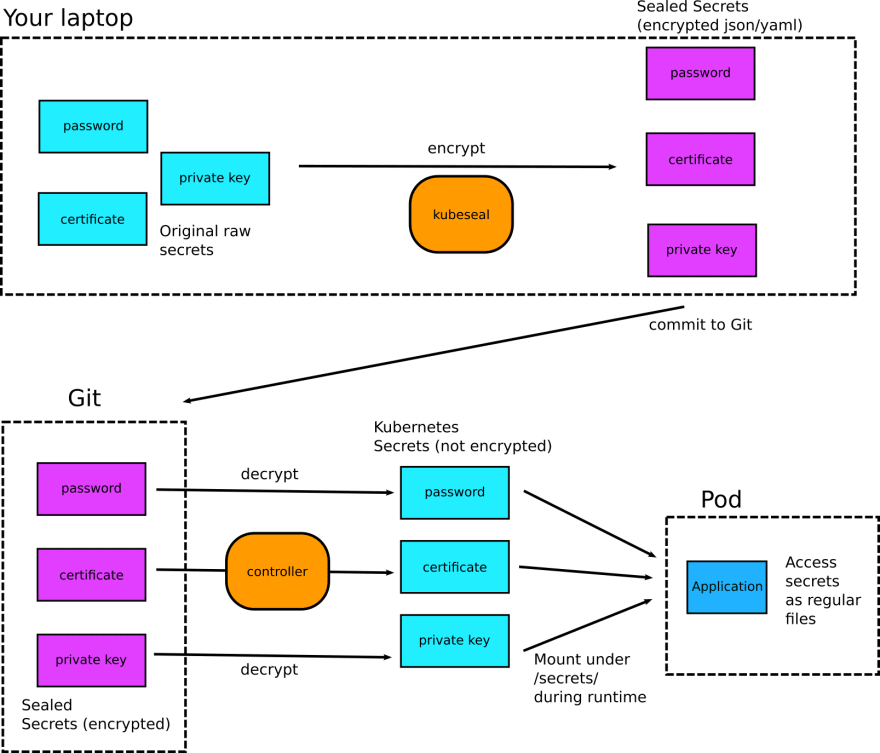 The full process is the following:

By using the Sealed Secrets controller, we can finally store all our secrets in Git (in an encrypted form) right along the application configuration.

In the example repository, you can look at the folder https://github.com/codefresh-contrib/gitops-secrets-sample-app/tree/main/safe-to-commit and it has all manifests of the application, including secrets.

You can simply point the Codefresh GitOps UI to this folder and deploy an application in a single step: 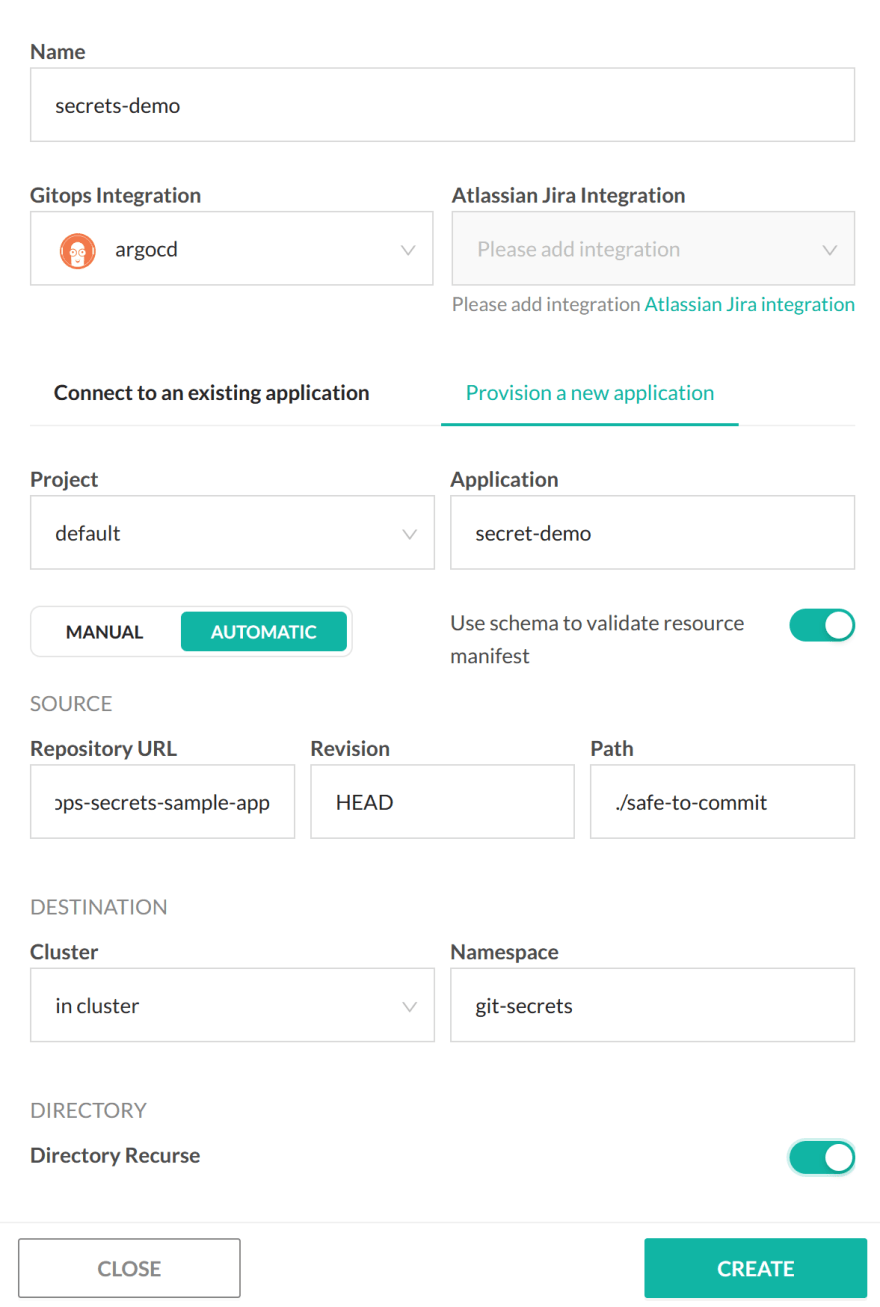 After the deployment is finished, you can see the components of the application in the GitOps dashboard:

And if you launch the application, you will see it is correctly reading all secrets: 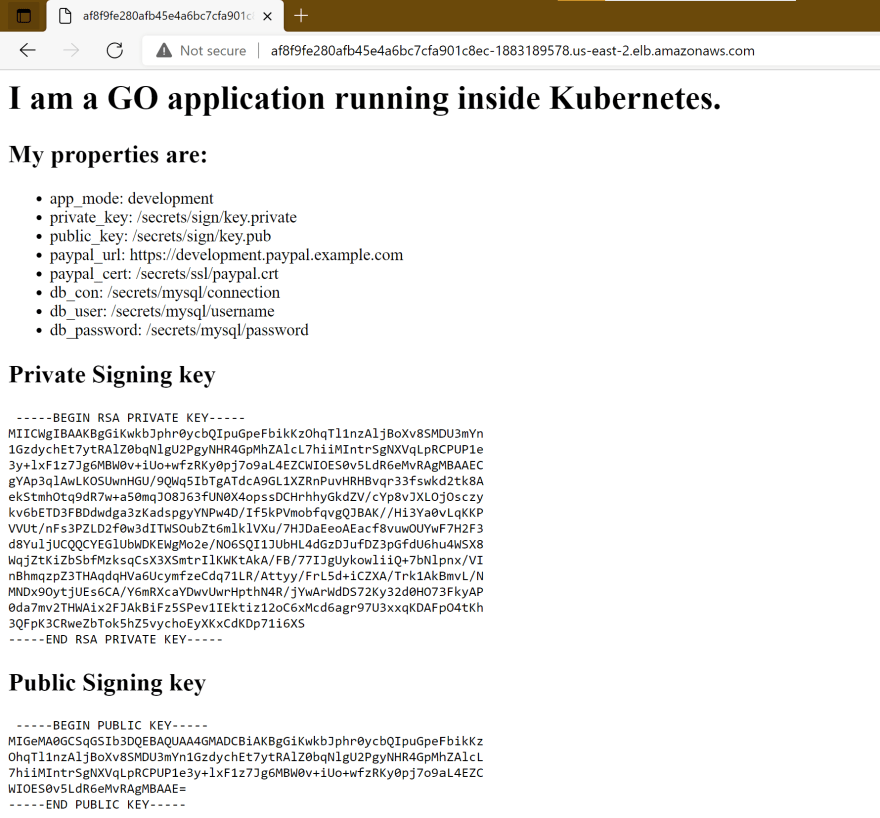 From here on, the application is following all GitOps principles. If you make any changes in Git (including changing the secrets) the cluster will be updated. And if you change something on the cluster (even secrets), Codefresh GitOps will detect the change.

Secret rotation is a complex process that should not be taken lightly. We have explained the basics of Sealed Secrets in this article, but if you want to use the controller in production you need to read the documentation and take into account other aspects such as secret rotation and key handling.

For more details on using the controller with Codefresh GitOps, please see our example page.

Learning an AWS Course is the Best Choice.