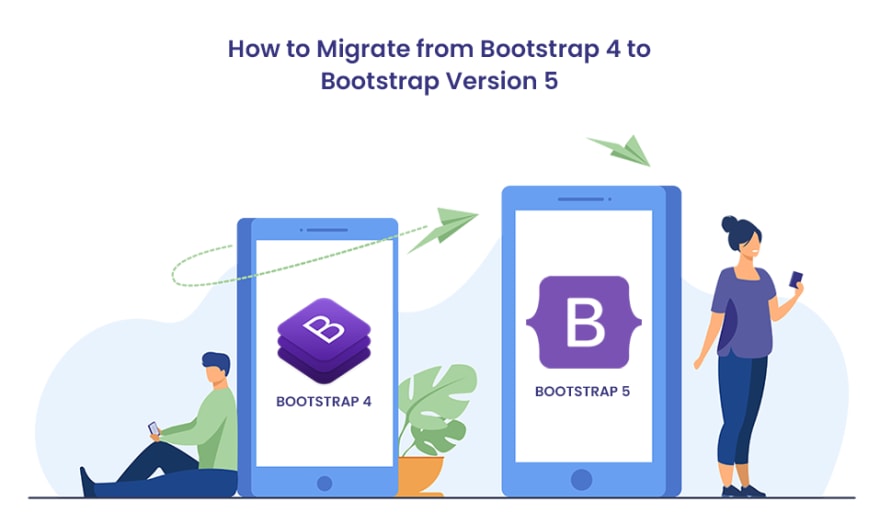 Bootstrap has been an essential tool for web developers over the years and has maintained a high standard. One of the most significant advantages of Bootstrap is easy to learn and use. With the release of Bootstrap 5, there are a number of key updates to the framework. While the whole framework did not go through a complete rewrite, code quality was improved as well as some new features are included such as Added new custom property, Redesign form control, the color palette was expanded, better API, and JavaScript Integration.

A key feature of the latest version of Bootstrap 5 is there it no longer depends on jQuery but relies on vanilla JS, Dropped support for IE 10& 11. The noticeable difference between bootstrap4 and Bootstrap 5 is that the logo is changed.

When you considering migrates into Bootstrap 4 to Bootstrap 5. Download the Zip file for source code. Unzip the file, you can find out lots of files but you have to only concerned about the “Dist folder” inside where the core CSS and JS live.

You can see that there is lots of CSS and JS file inside. However, you will need only two files in order to take advantage of the Bootstrap 5 feature in minified version.

Bootstrap 5 can be installed in various ways. You can install it to get it complied with CSS and JS, via source code or simply include it with modern development tools such as package manager like npm, RubyGems, and more. You can simply download files via source code and use it according to your project needs.

You can use this to compile Bootstrap using your own asset pipeline via Sass and JavaScript. The version includes Sass compiler (Libsass or Ruby Sass is supported) and Autoprefixer for CSS vendor prefixing.

One of Bootstrap’s best features is that it gives you a list of package managers that are compatible for use, saving time in the process. Package managers like RubyGems, NuGet, npm, yarn, and cComposer are important for the programmer for creating the exact conditions for your project to be executed in.

You can also attach the Content Delivery Network to your HTML file to use the new Bootstrap 5. This goes right in for those who wouldn’t want to have anything to do with already compiled JavaScript and CSS codes.

If you are using Bootstrap 4 or an older version of the Bootstrap framework, you may need to customize your support level when migrating to Bootstrap 5. The Internet Explorer 10 and 11 had been dropped in Bootstrap 5 translated directly to the programmer who uses the earlier version of the Bootstrap framework, that there is a need to customize his or her support system to support the new version as the migration from version 4 to 5 takes place. Google Chrome and Mozilla Firefox are the supported browsers, together with the newly unveiled Microsoft Edge Browser. The Firefox also contains the latest ESR version.

In addition, alternative browsers that use the latest version of WebKit, Blink, or Gecko, whether directly or via the platform’s web view API, are not officially supported. When it comes to mobile support, the minimum iOs supported version is version 7 and above.

For Android, it is version 6 and above on browser and WebView. The rest of the older Android and iOs versions are not officially supported.

The differences between the old and the new are maybe not all too shocking, as there are mostly improvements in the functionality of old elements of the Bootstrap. However, there are still changes all the same. 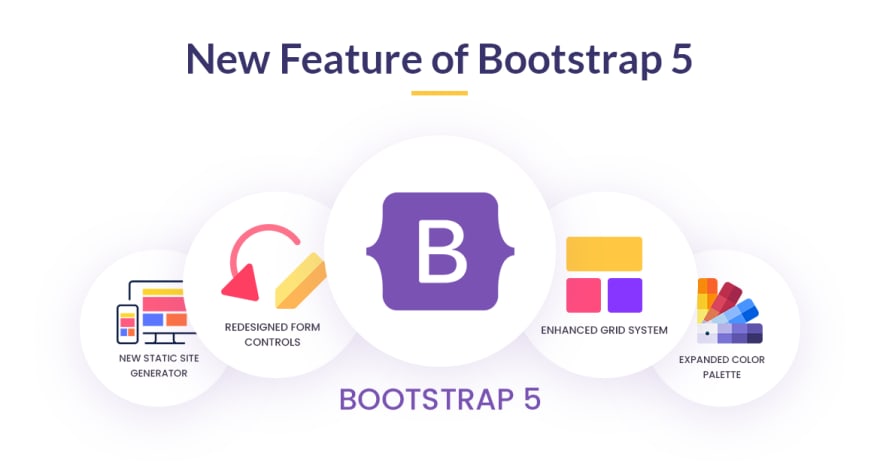 The most essential feature of bootstrap is jQuery. It’s has been shocking Bootstrap 5 is free of jQuery. Bootstrap would be easy to integrate with a JavaScript-based framework which means it removes the largest side client dependency. This is one of the major changes in bootstrap. Although this change was sure to be out, many developers do not happy with it the reason is that jQuery is one of the powerful platforms for cross-browser code.

Note: A simple jQuery replaced by vanilla jQuery. This will help to integrate with more is a framework, but if the user still wants to use jQuery, they can use it.

In Bootstrap 4, there is a need to add a wrapper element .form-group to ensure that the resulting margin is exactly what you want. Although elements like those with class .form-control have a width of 100%, together with form elements like the input, and textarea. This is the protocol to follow for Bootstrap 4, to get the optimum output.

In Bootstrap 5, the .form-group class was removed and replaced by the grid system. This will provide customized displays for a more consistent rendering across browsers and devices in a simpler way.

Bootstrap 5 is different from version 4 in this regard also. You wouldn’t need to toggle back and forth from your codebase to Sass and CSS. This is because, this time, the color palette has been built in. Not just that, the range of colors is extensive, leaving you with many options. You can now easily customize the look and feel of your app without ever leaving the codebase.

You can set your color of choice which is available as Sass variables and a Sass map in Bootstrap’s scss/_variables.scss file.

In Bootstrap 5 it’s disappointed with the lack of an integrated icon library in bootstrap. It’s exploring its own scalable vector graphics library.

It seems like changes in bootstrap5 SVG library with Bootstrap 5.

Here are some of the major changes in the Grid system.

We are curious that how to build new and interesting CSS libraries and toolkit; it’s challenging to build on the web for the last decade. We have a brand new utility API in bootstrap5.

Bootstrap 5 comes with many changes and improvements to come in the future including the refining of some source codes and more JavaScript plug-in integration.

use bootstrap 5 in vue correctly