I am not a product designer, startup entrepreneur, or engineer. Seven years ago, I stumbled into wearing all of these hats because I wanted to create something. Something I could show to friends on the Internet. Something that could generate revenue. Most importantly, something that I could call my own.

I’ve always been an Excel junkie, and decided to create a physical keyboard cover made out of silicone that would teach Excel keyboard shortcuts to the user. There are 100 different things I could have done to start this endeavor, but the most important first step, in my mind, was to design the product. This was 2012, and I could have picked up Adobe Illustrator or some other wireframing tool at the time, but I ended up picking up a tool that I already knew how to use: PowerPoint.

That’s right, good old Microsoft Powerpoint. I was already using it all the time at work, and figured the benefit of knowing how to use PowerPoint (even though it wasn’t made for product design) would outweigh the learning curve of a more appropriate tool like Adobe Illustrator. Couple months later, I had my first batch of inventory, set up a basic website, and my business was up and running.

Building for the community 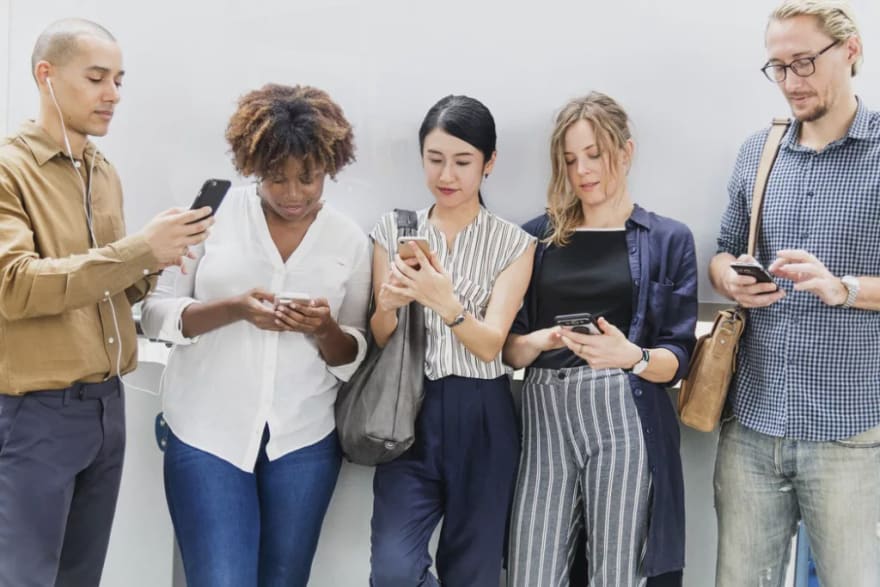 Right around the time I launched my product, social media started to take off and I saw how a product could become “viral.” I experienced a bit of this for my own product, but what was more interesting to me was the community that I reached. I started writing blog posts, contributing to forums, creating online classes, and the feedback loop kept me going. I realized the primary focus of my business wasn’t the product, but rather the community that formed around it. I think a lot of makers hack together projects with a specific community in mind. It’s all about finding a specific problem, and building a solution that addresses that problem, right? While community building is great, personally I wanted something more from my projects.

I wrote an article about why taking things apart is an important skill for a maker. I think makers also enjoy taking disparate “parts” and building them up together to create something bigger than the sum of the parts. This was the missing piece.

I never considered myself an artist by any stretch of the imagination. But when I was creating the product design with the box and circle buttons in PowerPoint, there was an aspect to the process that made me feel like an artist. It’s weird to say, but PowerPoint made me feel creative. If you are a maker, this creative destruction, experimentation, and re-building is probably a common feeling when you’re working in a tool even as rudimentary as PowerPoint.

Creativity in the maker generation

Ryan Hoover wrote an article recently all bout no-code tools. In it, he claims that “everyone’s a maker” now that you can use some of these no-code tools to build fully functional applications. Gone are the days when you just have a simple design in PowerPoint!

We’re seeing a wave of powerful “no code” tools enter the market.

I’m speaking with 3 startups – focused on voice, mobile, and web app creation – that are raising.

The time and cost to build software products will drop by another 10x. This is part of our thesis at @ProductHunt.

For the non-technical makers out there, I believe these no-code tools give you a way to express yourself in a way that has never been possible before. Ryan states that “you no longer need to be a programmer to build things on the internet, empowering a new wave of makers from different backgrounds and perspectives.”

To take this even further, these no-code tools unleash a new type of skillset for makers: creativity. As Ryan said, only a small group of software engineers were able to create on the Internet after learning how to code. Now, makers of all backgrounds and experiences can feel what it’s like to be creative from designing all the way to publishing a website or app.

A by-product of no-code tools is the creativity they give to makers in the workplace. If you’ve worked at a corporation before (or currently work at one), you probably have been frustrated by the tools your IT department forces you to use. I had written before about a really old piece of time-tracking software my company made me use. Not only was the the software clunky, IT was slow to update it since it would require getting a new license from the vendor they were working with. It was a hot mess. 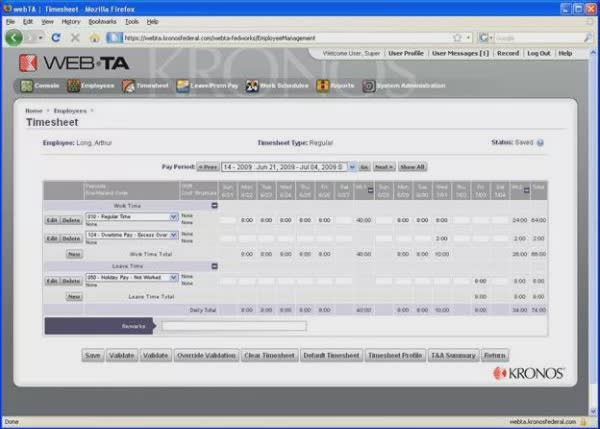 Think about all the schedule trackers, hiring trackers, and project trackers you’ve seen done in Google Sheets. Those are all mini applications that can be built with some basic knowledge of Excel formulas. Whether you are a business analyst or product designer, you now have the ability to innovate within your company by building an application with the numerous no-code tools out there. Instead of relying on IT to buy an expensive SaaS application that defines how you work, you can build the application that shapes to your workflow.

If you have used Excel or Google Sheets before, congrats! You are a maker using a no-code tool! You may be wondering how you can unleash your own creativity with some no-code tools, and it starts with knowing which no-code tools are out there. Ryan’s article mentions a few, and Colin Winhall also listed some tools right here on Maker Mag in this article.

One way to frame the no-code tools you use is the “stack” you need to have in your project. The stack is a concept borrowed from software engineers and system architects. For instance, a common stack used by many web developers back in the day was LAMP. L inux as the operating system, A pache as your server, M ySQL as your database, and P HP as your programming language. What does the stack look like for the hundreds of millions of makers who build with no-code tools?

I really like Bram Kanstein’s stack from No-Code MVP:

A few things to note about no-code stacks as you start building your own applications:

One of the promises of the no-code movement is the ability to launch a prototype of your dream application in minutes or seconds. In Ryan’s article, he talks about using Dreamweaver which was a WYSIWYG website creator but still required you to know a bit about HTML/CSS. Then came WordPress which most of the web still runs on, but platforms like Carrd make it even simpler. As the path to launching your site or application gets shorter and shorter, the number of makers who can materialize their creative thoughts increases as well. I really like this quote from Coda’s CEO in this Harvard Business Review article about the democratization of software:

And I predict they’ll be taking on software next. These makers won’t just be engineers in Silicon Valley; they’ll be problem-solvers and tool-makers, from places as wide and unexpected as the ones YouTubers came from. — Shishir Mehrotra

One maker I want to highlight is Ben Tossell from MakerPad. In Ben’s Maker Mag story, he discusses how he saw the success of Startup Stash, and how he could build something similar targeted at marketer’s called Marketing Stack. The ability to see popular applications, and apply your own unique twist to it, is a trademark of Ben and the maker generation. Ben Tweeted about a “mini-meditation” app he built in Coda after the platform launched version 1.0 to the public: 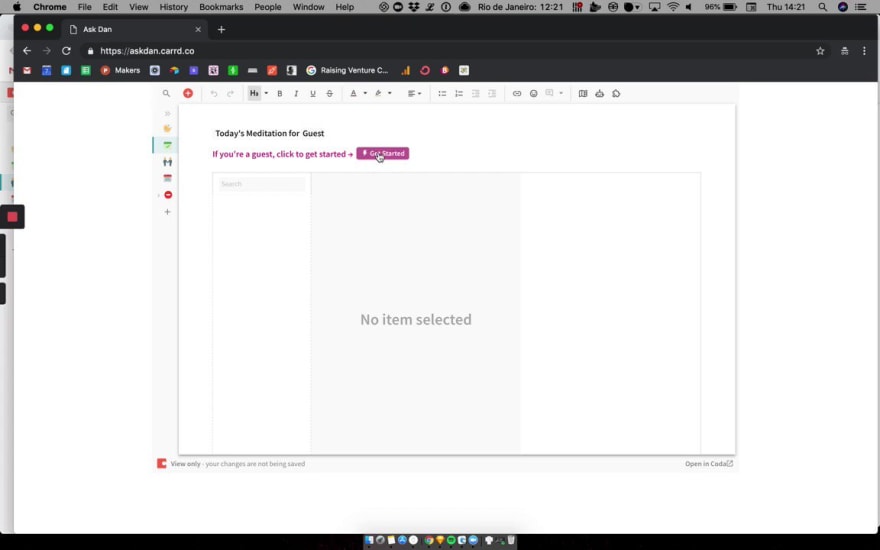 After @calm $88M raise, I thought I'd build a mini-meditation app in @coda_hq

He has also has built his own versions of Airbnb, Airtable, Github, and more. I highly recommend signing up for MakerPad to get his awesome updates :).

In no-code land, it’s rare to see unicorns born since no-code tools are still in their infancy. Makers are still building and testing platforms for their own projects, but until the large Fortune 500 companies take notice, you’re probably going to be stuck with using some outdated time-tracking software from Oracle or SAP at your company. “No one ever get fired for choosing IBM,” a they say.

But large corporations have taken notice of the no-code movement. There is a “low-code” platform called OutSystems who raised $360M of venture capital last year solidifying them as a unicorn. The company was founded in 2001 in Portugal, and likely pivoted a few times to get to where they are today.

What does this mean for makers out there building applications on no-code platforms? Your skills are in high demand if you decide to work full-time at a large corporation. Having “proficiency in Microsoft Office” or “knowledge of XYZ CRM system” is a thing of the past. The maker skillsets of adaptability, creativity, and problem solving with low-code tools are and will be in demand no matter where you go. You know what excites employers more than seeing you know Microsoft Office on your resume? A list of projects, websites, and applications you have launched into the wild that show you can build a business from the ground up.

A perfect environment for creativity

As Ryan, Bram, and Ben have showed us, building with no-code tools shows how more makers than ever before have an outlet for their creativity. Not just creativity in terms of painting a picture or creating a song, but creativity in terms of marketing, product design, and operations. If you work in operations, when was the last time you felt creative in terms of managing inventory or routing customer requests? Chances are the super slick Excel spreadsheet you made at work was the only thing that gave you license to build something that you could call your own and others in your company could use.

In the documentary In Search For Greatness, the director discusses the concept of “unstructured play” and how rules prevent children from becoming great athletes when they get older:

There’s a great study recently out on the German soccer team that just won the World Cup, looking at the development path of the guys who made the national team and the guys who were one rung below that. And the only big difference that they could come up with was that the guys who made the national team had a lot more time in unstructured small-sided play when they were young … and continued with more unstructured play into pros. — In Search For Greatness

My takeaway as to how this applies to makers is this: continue building, experimenting, and creating with no guidelines or rules around what you can make. As we “play” with no-code platforms, we train ourselves to be more creative compared to our peers.

Originally published at makermag.com on February 11, 2019.

First week of the 365 Days Of Blogging Challenge!

Coda is a new type of document that blends the flexibility of documents, the power of spreadsheets, and the utility of applications into a single new canvas.