In my last week’s post, I wrote an overview of different frameworks for .NET desktop applications. As soon as my article was published, Microsoft announced big news for Windows desktop developers.

With the recent Microsoft announcement of .NET 5 which will be released in Autumn 2020, Microsoft will unify the developer experience for all supported platforms. 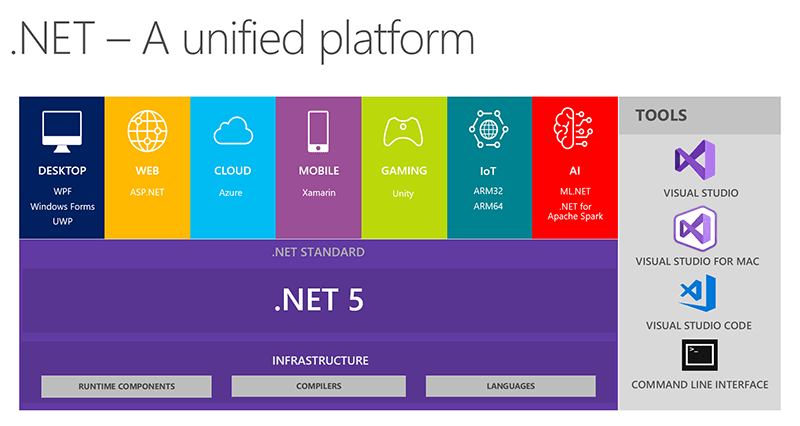 In this article, we’re going to focus on what implications this has for existing Windows desktop applications and what we as developers can do to prepare ourselves as well as our applications for the move to .NET 5 and why we should consider doing it in the first place.

Microsoft has announced the release of .NET Core 3.0 for September 2019. .NET Core 3.0 allows us to migrate our existing desktop applications by adding WinForms and WPF support to .NET Core.

On the other hand, he also mentions that:

"If you have existing .NET Framework applications that you are maintaining, there is no need to move these applications to .NET Core. We will continue to both service and support .NET Framework, which includes bug–, reliability– and security fixes."
– Scott Hunter, Director of Program Management .NET

So we do not need to migrate our applications, but if we do, we get to use all the benefits that come with .NET Core such as side-by-side deployment, new features, performance improvements, and cross-platform support.

For applications that are no longer in active development, but more likely in maintenance mode, it is not required to migrate them to a newer version of .NET. Security patches will still be available for the (full) .NET Framework.

What are the benefits of .NET 5?

In short: All projects should be based on the same project files, have the same APIs available to them, and benefit from the same performance improvements.

If you want to dive deeper into the announcement of .NET 5, make sure to check out the official Microsoft announcement.

In my opinion, .NET 5 brings developers closer together. Whereas Xamarin or UWP developers, as well as ASP.NET Core developers, enjoyed new tools, framework releases and APIs, WinForms and WPF desktop developers often felt left outside. .NET 5 will change that.

With the unification of all the targets and platforms, every developer will have the same tooling and the same APIs available to them. It’s a vast improvement.

.NET 5 closes the gap and allows for much simpler knowledge transfer between those targets and project types.

Again, for me, it’s a no brainer to migrate all existing applications that still are in development to .NET 5 when it’s been released in 2020.

XAML Island provides a way to modernize applications that cannot be rewritten as a whole but could benefit from access to controls based on Windows 10 APIs.

Thomas Claudius Huber has written an in-depth blog post about how to use a UWP control in an existing WPF application.

It is worth mentioning that XAML Island 1.0 is released as part of Windows 10 version 1903. Any version prior will not support XAML Island.

Desktop developers often felt left out from all the shiny new things .NET Core had to offer. There were only a few new features for .NET Framework-based applications.

With the announcement of .NET Core 3.0 and its support for WinForms and WPF applications, Microsoft shows a migration path for existing Windows desktop applications which allows those applications to benefit from all the .NET Core improvements.

With XAML Island Microsoft offers another way of gradually modernizing existing .NET desktop applications by allowing them to use UWP controls.

In my opinion, there is a bright future for .NET and desktop development on .NET. With .NET Core 3.0 we get the chance to benefit from all the improvements of .NET Core. And with .NET 5 Windows desktop developers are finally on the same page with all other .NET (Core) developers.

This article was originally published on claudiobernasconi.ch on May 15th, 2019.

List of some badass tools powered by Open Source Community

Copy By Reference vs Copy By Value Analogy