Bun is changing out the scenario for Node.js, with much more performance in HTTP and WebSockets, but how FAST it is compared with Python?

In the Bun website https://bun.sh/, the source code of the WebSocket benchmark is available, so... let's try to run Falcon + uvicorn on it!

I just simplified a little the benchmark, to remove a string concatenation, to measure more of the raw throughput with less impact other things, and runned using Falcon + uvicorn and socketify.py, when benchmarking i was talking with Vytautas Liuolia in the Falcon Gitter for tunning HTTP performance in other raw throughtput testing as well, and Falcon is not so much focused on WS performance, this also depends a lot of ASGI server too. For this test i choose uvicorn with gunicorn as ASGI server.

Messages per second with Linux x64: 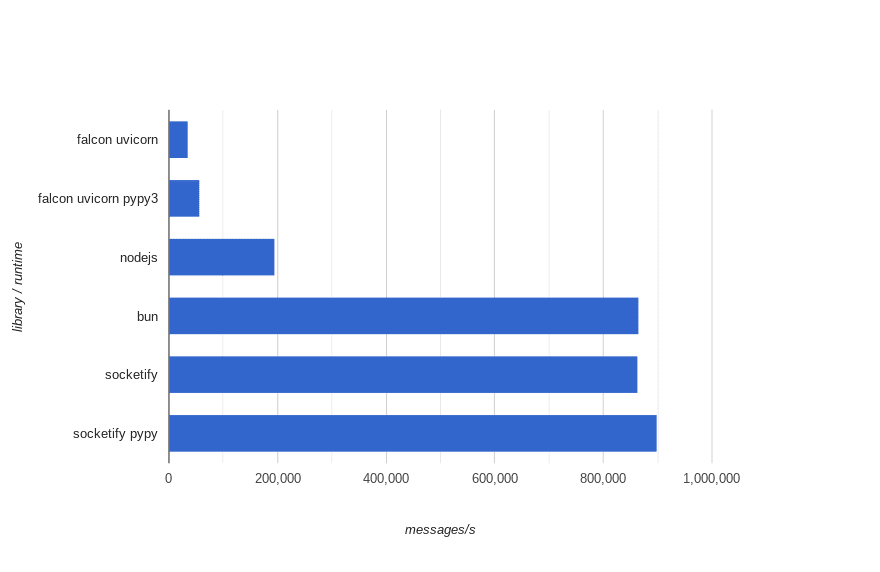 WebSocket tested with Bun.sh bench chat-client check the source code in this link

Bun is REALLY fast! But why the performance of Bun is almost identicall to socketify.py? The answer is that it also uses uWebSockets as base, actually the same code of the PR i made to the C API is been used in Bun with some tweaks, and it endup with almost the same performance that socketify.py, showing that both have some DNA in common.

Follow @cirospaciari on twitter for more updates about socketify.py and if you have some time check out the github https://github.com/cirospaciari/socketify.py this project can be even better with some community love ;)

Once suspended, cirospaciari will not be able to comment or publish posts until their suspension is removed.

Once unsuspended, cirospaciari will be able to comment and publish posts again.

Once unpublished, all posts by cirospaciari will become hidden and only accessible to themselves.

If cirospaciari is not suspended, they can still re-publish their posts from their dashboard.

Once unpublished, this post will become invisible to the public and only accessible to Ciro Spaciari.

Thanks for keeping DEV Community 👩‍💻👨‍💻 safe. Here is what you can do to flag cirospaciari:

Unflagging cirospaciari will restore default visibility to their posts.