A little bit of context

If we would have to name what are the most trending or popular frameworks, we may think about JavaScript ones. This, having in count that the cross-platform movement is growing so fast. And with a justified reason.

Choosing a cross-platform framework, allows you to build apps for any kind of platform; such as web, desktop and mobile.

All of this without having to learn different technologies in the process. You can learn one programming language, and build many kind of applications. Such a great thing, right?

The ability to build applications for many kind of platforms reduces costs and also time. Years ago, if you wanted to build an Android app, you probably would have chosen Java. Or if you were planning to release the app on iOS, then Swift would have been a reasonable technology to work with.

As you can imagine, learning this two technologies were not impossible, but a time-consuming and very improbable thing. What developers were used to do (and still do) was specializing in one, such as Android or iOS option.

Nowadays, we still have mobile, desktops and web developers. But it's most likely to find a developer who can work with these three platforms and dominates one language. If you're a JavaScript developer, for example, you can develop web, desktop or mobile apps with JavaScript. So you only have to learn how is the process of doing a cross-platform app in your language, but not a entire, new one.

We've mentioned JavaScript as a language which supports cross-platform development, and certainly this is true. You can choose React for web, Electron for desktop or React Native for mobile (either for Android or iOS!).

But there are also other frameworks that are not based on JavaScript. This is the case of Flutter, which is based on Dart.

And my post goes in this way. We've seen a very interesting Flutter's growth across time. As you can see in the next Stackoverflow trends' graphic: 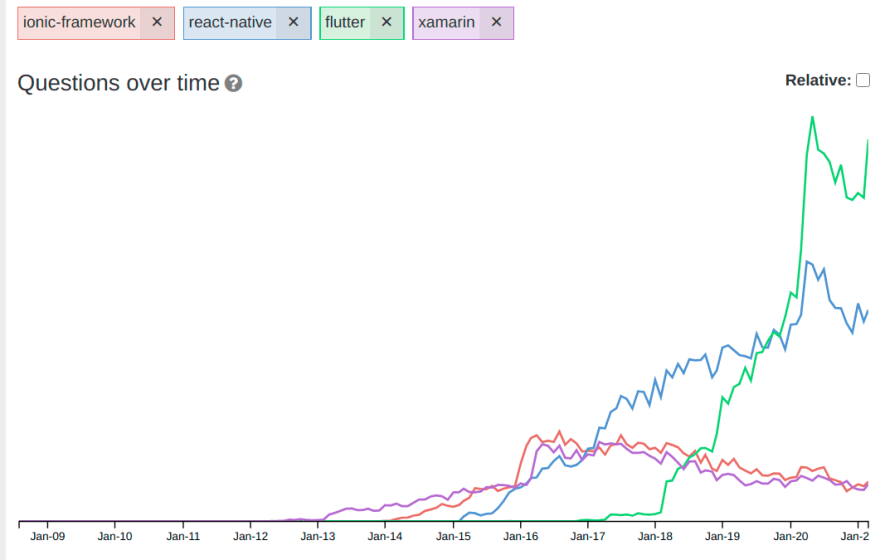 This other Google Trends graphic, shows the next:

As we can see, trendings indicate Flutter is growing at least in interest of the dev community. Big firms like Tencent, Alibaba Group, Ebay and many others are starting to adopt this technology as its base language to start to build new cross-platforms apps.

In the FOSS community, Canonical has just announced they will adopt Flutter as its main technology for mobile and desktop developments.

So... these are not fixed trendings, of course. They may vary over time.

But what do you think? Flutter will be the next big cross-platform framework?

I read you in the comments!

Getting started with Remix

Ciro
You can call me Ciro! I like coding!
How are you using Styled Components?
#react #webdev #discuss #css
React form validation with Formik and Yup
#react #reactnative #javascript #node
November 25th, 2021: What did you learn this week?
#weeklylearn #discuss #weeklyretro